Lightships were important aids to navigation and are an important part of our maritime heritage. They served mariners in this country for 163 years, from 1820 to 1983. Over the years, 116 stations were established along the three coasts of our country (Atlantic, Gulf and Pacific) and in the Great Lakes. That era peaked in 1909 when there were some 56 lightship stations along our coasts. The location of the first lightship station was in Chesapeake Bay, while the Nantucket station was the last to be automated.

Approximately 174 vessels were constructed to man these stations. Of those ships, 168 were constructed by the U.S. Lighthouse Service (1789 – 1939) and six by the U.S. Coast Guard, which absorbed the Lighthouse Service in 1939. Overall there are only 12 lightships remaining in this country. All lightships in the United States have been retired and many replaced by buoys, LNB's (Large Navigational Buoys), or Texas Towers. The lightship has passed into history along with the coasting schooner and the whale ship.

Lightship stations, with their aids to navigation, were established to show the entrance to a harbor or bay such as the San Francisco station.

At other stations, they warned of dangerous underwater obstructions such as BLUNTS (reef). Because lightships often served on several stations during their service life they are officially known by their hull number, in our case the number is LV 605, which stands for light vessel #605. When assigned to a station the vessels had the station name painted on the side, such as BLUNTS or OVERFALLS. The name RELIEF was painted on vessels assigned to spell a station ship when she came in from her station for maintenance.

Station locations were such that construction of a lighthouse was impracticable because of such issues as water depth, currents or expense. They were, in fact, floating lighthouses. One unique attribute of lightships is the large mushroom anchor (weighing 6,500 lbs.), which extends out from the bow. This anchor allowed the vessels to maintain their station in all states of weather, even when other vessels sought safe haven during gales or hurricanes.

WLV-605, one of six lightships constructed for the Coast Guard, was built by Rice Brothers Shipyard in Boothbay, Maine, in 1950.

She was commissioned on 15 February 1951 as OVERFALLS, a lightship station off Delaware. In 1960 she was transferred to the BLUNTS (reef) station off Cape Mendocino, California. Finally, in 1969 she became RELIEF, relieving all west coast lightships.

The ship was decommissioned by the Coast Guard in 1975 and given to the city of Olympia, Washington in 1976. Olympia was unsuccessful in making the ship a museum and sold the vessel to Mr. Alan Hosking of Woodside, California in 1979. In 1980, he sailed the ship from Olympia to Oakland California and dry-docked the vessel. After completion of dry-docking, the ship was sailed to Half Moon Bay, California, where she remained anchored off Piliar Point. He in turn donated the ship to the United States Lighthouse Society on 31 December 1986.

In February of 1987, Society volunteers sailed the ship under her own power from Half Moon Bay back to Oakland and docked her at the Ninth Avenue Terminal in the Oakland Estuary.

She remained at that location for a period of 15 years, undergoing maintenance and restoration to her 1951 appearance. The ship was dry-docked in July of 2000 during which time repairs were made and the hull was painted. After the yard work was completed, the ship’s topsides were painted and a new non-skid deck applied. The ship was listed as a National Historic Landmark by the Secretary of the Interior in 1990.

Over the years the lightship LV 605 continued to be a popular attraction, and minor restoration work continued to maintain the vessel. In late 2012 the Society was approached by the Anchor Program in San Francisco, which wished to take over the ship and use it as part of its marine trades education program while still making it available to the Society for tours. The details were worked out and ownership of the vessel was transferred to the Anchor Program that fall.

In June 2002, the ship finally opened to the public at Jack London Square in Oakland, California. As of that date, over $400,000 and 19,000 man-hours (mostly volunteer) had been expended on the ship. In 2003 the Society was honored to receive the California Governor's Historic Preservation Award for restoring the RELIEF. The WLV 605 is the last known RELIEF lightship remaining in this country. 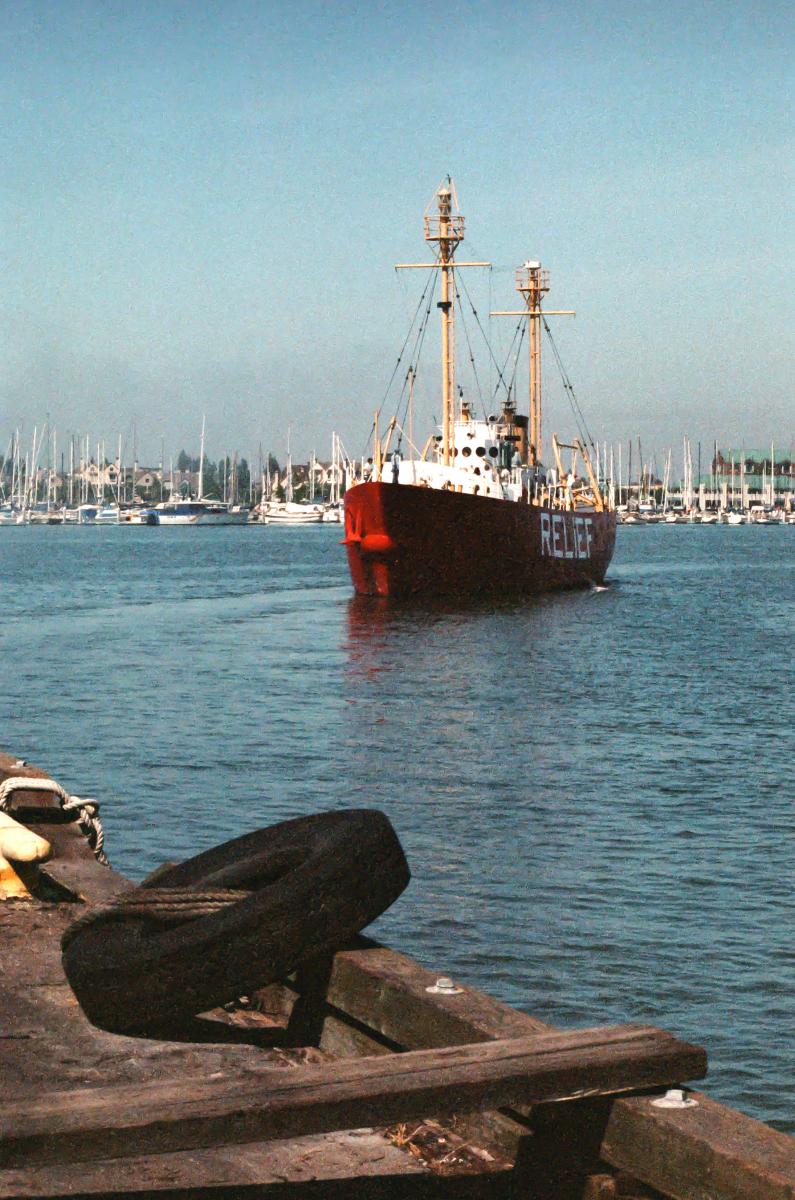 The image to the left, taken by Susan Montague, was from 2002 when the Lightship Relief was moved in the Oakland-Alameda Estuary to her new berth at Jack London Square where she remains today.  She is arriving at the dock under her own power, a tribute to all the volunteers who restored her from a hulking and rusting ship into this beautiful vessel.

New Lightship LV605 - RELIEF Webpage - A good friend of the Society has created an amazing webpage dedicated to the Lightship LV605. There are many interactive, panorama images that let you see nearly every inch of the ship, as well as some historic photos from our archives. Be sure to check this out.