After acquiring the lightship, the U.S. Lighthouse Society had established three primary goals for the ship: 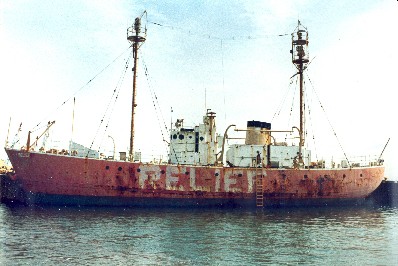 The actual lightship restoration work began after the ship arrived at Oakland's Ninth Avenue Terminal, in February of 1987. Since the terminal was a secure facility, the crew had no vehicle access on to the dock. All supplies and personnel had to transfer by rowboat from the adjacent marina, up the side and on to the ship. This proved to be an arduous chore, especially in foul weather.

The restoration began under the capable leadership of Walter Fanning, who had recently completed restoration work on East Brothers Island Lighthouse, in San Francisco Bay. Walter was a skilled craftsman and had access to a fully equipped machine shop. At the time, he was also the Vice President of the U.S. Lighthouse Society.

Generally, work progressed in phase with the weather, with topside work being done in the spring and summer; below deck work was done in the fall and winter. At the start of the project there were approximately 20 regular and semi-regular volunteers. This number dropped off significantly after the initial enthusiasm of the first year. Projects during the first few years included: 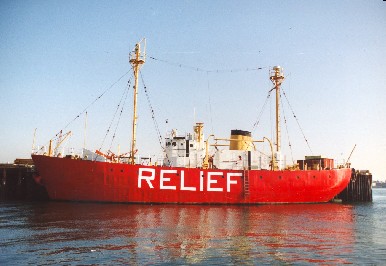 The initial restoration effort took about five years and 9,500 man-hours. This would be up to the point that the Society felt the ship was really ready to open to the public on a long term basis. By the spring of 1992, the ship was indeed all dressed up but had no place to go. Time marched on… weeks turned into months, months turned into years. Still, there was not a word on our dry-docking or news of a permanent berth.

As time passed, it began to appear that for this project, there was "no light at the end of the tunnel". Slowly, our pool of volunteers dwindled down to only a few. Naturally, as manpower decreased, deterioration increased until finally at the end of the decade there was considerable topside catch-up work to be done.

Fortunately, at about this time things began to change for the better. Funding for our drydocking was approved and in the works. Plans for a berth for the ship at Jack London Square were beginning to materialize, and by the year 2000 things were starting to get back on track. By June of 2002, we were ready to move the ship to our new berth and open to the public, our three primary goals had been accomplished.

In the fall of 2012 the lightship was transfered from the US Lighthouse Society to the Anchor Program in Oakland CA to be used as a training vessel.

The main deck restoration work required about 1100 man-hours expended over a period of approximately six months. None of the original deck coating could be saved, so as a result, the deck had to be taken down to the bare metal. 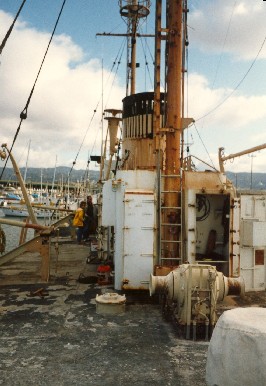 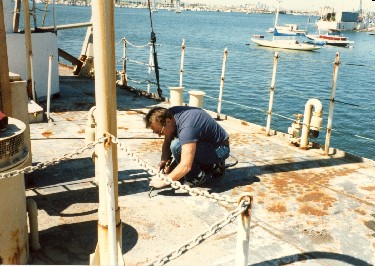 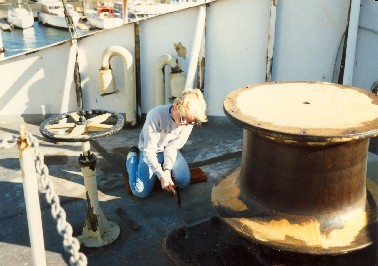 Both young and old were put to the task, no age discrimination here! 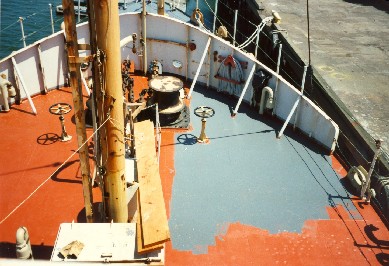 After the deck was primed, a base coat of gray enamel was applied 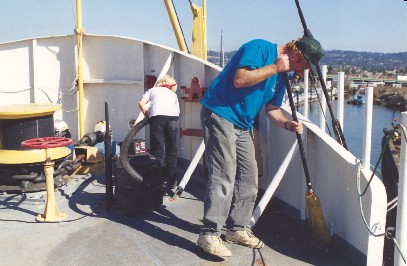 Another cleaning, prior to "taping" the deck 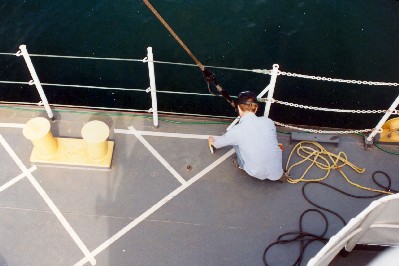 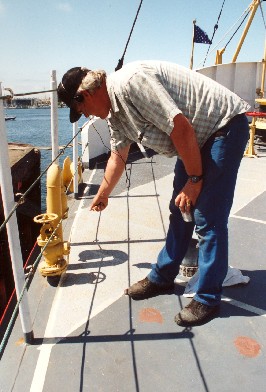 Next, a layer of "non-skid" sand was applied over an epoxy base 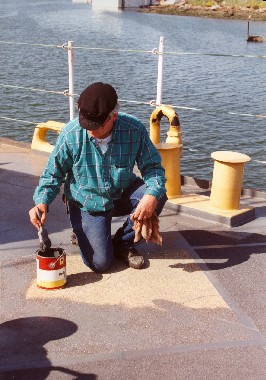 Then, another coat of gray enamel was applied 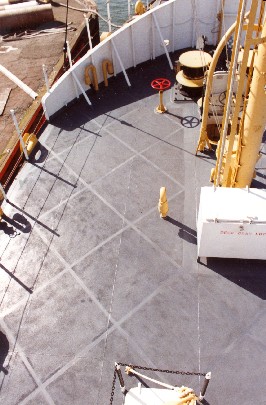 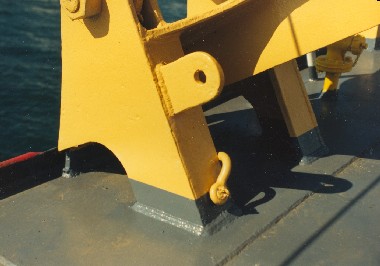 The main anchor used by lightships is this country was the mushroom anchor. The name is derived from the anchor's shape, which is very much in appearance like that of a mushroom, with a large round head connected to a long tapered shank. The mushroom has wedge shaped holes around its edge that helps to break the suction that holds the anchor to the bottom, enabling it to be raised to the surface. 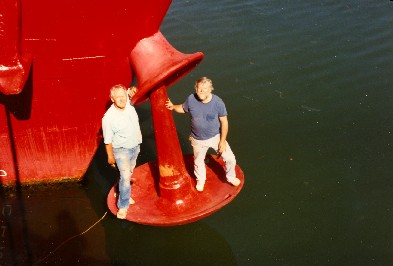 The mushroom anchor was designed in 1807 by Robert Stevenson, grandfather of the famous writer Robert Lewis Stevenson. At that time, the anchor was successfully used for the temporary light vessel PHAROS, during the construction of Bell Rock Lighthouse off Scotland.

Due to its superior holding power, the "mushroom" became the standard anchor for use aboard lightships in this country. Varying in size from 3,000 to 8,000 pounds, the anchor would normally be stowed in the hawse pipe extending from the bow on the centerline of the ship. Frequently the spare anchors were also mushroom anchors, although the newer lightship often carried standard 5,000 pound "Navy" anchors. When deployed, the anchor would be attached to the end of a length of chain that would normally be let out to 7 to 8 times the depth of the water. When "stowed", the anchor would fit snuggly into the hawse pipe and the chain would be neatly "faked down" in the chain locker.

The photo shows the mushroom anchor from the Society's Lightship RELIEF, partially deployed and supporting Chuck Christenson and Warren Wilson who were both instrumental in the restoration project. To be accurate, the anchors were not normally lowered to the bottom along with the crew, as depicted in the photo.