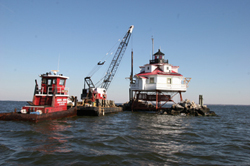 The U.S. Lighthouse Society has launched a new competitive grants program to help lighthouse preservation groups across the country save the iconic coastal landmarks that help define the nation’s rich maritime history and legacy.

The first nationwide preservation grants program of its kind, the Society's Lighthouse Preservation Fund and grant program has been set up to support a variety of lighthouse projects, and will award a series of grants each year. As the Lighthouse Society’s preservation fund increases over time, so will the number of grants that will be awarded.

“This is a start of a self-help effort that will assist local lighthouse groups and others save the structures that tell the story of a maritime nation, and will help pass that heritage on to future generations,” said Mike Vogel, USLHS board secretary and president of the Buffalo Lighthouse Association.

“We’re excited to be able to do this, to have brought the fund to the point where we can start making grants,” he added. “It has taken time to reach this stage, but it has long been an important goal of the Society and we are especially pleased that Society vice president is heading up the program.”

More and more lighthouses have been turned over to not-for-profit groups, almost all of them based in coastal communities near specific lighthouses, as advances in navigation technology and the Coast Guard’s need to carefully target its resources render them too expensive to operate. While many do remain in government hands, many more are preservation projects typically funded through donations, group fund-raising and preservation grants from charitable foundations and local or state governments. The new fund will be the first to assist the national lighthouse preservation movement itself.

The 30-year-old U.S. Lighthouse Society, founded in San Francisco and still headed by lighthouse expert Wayne Wheeler of North Carolina, will make the grants using interest from a fund generated by donations and fund investments. During its first year, the Society donated $20,000 in grants for preservation and planning projects, including an initial $10,000 grant awarded to a project at Block Island Southeast Lighthouse, RI, funded by Lands’ End, a U.S. Lighthouse Society corporate sponsor. In 2015, awards were granted to three deserving light stations: Sentinel Island in Alaska, Toledo Harbor on Lake Erie, and Race Rock in New York.

For those wishing to apply for funding, application information is available on the Society’s uslhs.org website. For those wishing to contribute to the Society's Lighthouse Preservation Fund, information can be obtained from USLHS Executive Director Jeff Gales at the Society’s headquarters. Donations to the Fund are tax-deductible and will be applied to principal only so that your contribution will have longevity and will assist in generating grants annually to important lighthouse projects for many years to come.

**Instructional Video - We had a live webinar designed to help you learn more about our Guidelines and the Application, Selection and Execution Process and to address your questions. It was recorded and available for viewing, Click Here or on any of the links that say Instructional Video

Donate to the Grants Program

See who has been awarded past grants!

Check out our Preservation Grants Brochure

If you have any questions, please contact:
U.S. Lighthouse Society
Phone: (415) 362-7255
Email: grantsprogram@uslhs.org