View our list of photos we found in the amazing photos published in Life magazine. 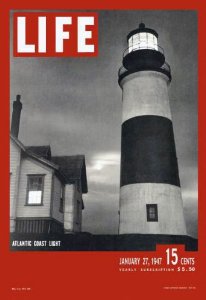 The system for retrieving images and stories about lighthouses from Life magazine is not perfect, but it's free, and that alone is a wonderful thing.

Life Magazine has led several lives, from weekly American lifestyle and humor magazine (1883-1972), to special editions only (1972-1978) to monthly journal (1978-2002). It has folded, but the brand name is still alive under Time Magazine's publishing empire. Henry Luce, the founder of Time, bought Life in 1936, and used it to show that photography could tell a story just as well, if not better, than words. Hence, Life became America's mirror, a place to look into the eyes of fellow citizens.

Luce's purchase came at a time when it was tough to look at America, in the waning days of the Great Depression. But rather than dwell on the topic, the magazine looked at all that was good and beautiful in America. The first issue hit newsstands on November 23, 1936, and just a month later featured a trip along the Massachusetts coast with Captain William Wincapaw, the original Flying Santa of the Lighthouses. The photo essay features pictures of four lighthouses - Boston, Annisquam, Ipswich and Straitsmouth Lights - and a Coast Guard station on Plum Island. The following year, the magazine returned to the Bay State to capture life on Martha's Vineyard and Nantucket, showing how Gay Head Light sat in the heart of a tourism boom that was changing the culture of both islands.

Such broad and sweeping articles, full of aerial imagery of coastlines, inlets and bays, became the staple style of the magazine. Life became America's photo album.

But just as the average American's focus turned outward with the opening of World War II, after a long period of isolationism, so, too, did the lenses of Life photographers. A Dutch lighthouse offshore is shown dimmed due to the threat of German invasion; Great Britain's Dover West End Breakwater Light is seen in a series of images captured during a Nazi attack on British shipping. In one photo, a French murderer is shown imprisoned for life - as a lighthouse keeper.

Several articles stand out as true keepers for lighthouse lovers. On January 27, 1947, Life ran a long piece on the Atlantic Coast, complete with a picture of Nantucket's Sankaty Head Lighthouse on the cover. Throughout, there are pictures of Cape Henry Lighthouse, Portland Head Light, Jupiter Inlet and more.

The system for finding the contents of Life Magazine is relatively easy. We just need to go to our favorite search engine, Google. Google Books digitized the 1936 to 1972 weekly run of the magazine in its entirety. Once we reach the "all issues anchor" for the magazine, we can search within its contents. About 15 pages of results pop up. Not all are worth the time. As with Time magazine, oftentimes the word lighthouse is used as a metaphor. Sometimes it's used in relation to the famed New York City charity, Lighthouse for the Blind. So, not every "lighthouse" in Life has to do with lighthouses.

But there are nearly fifty instances that do either tell a story about a lighthouse or provide a picture of one (perhaps more; more on that in a bit). They can be as simple as a distant shot of Europa Point Lighthouse at Gibraltar as the Mediterranean prepares for war, or as comprehensive as a focus on the waning existence of the lightkeeper as seen through the eyes of a Lake Huron family. Occasionally, lighthouses are included in the quick hit sections of the magazine, like the sole photo of a prefab concrete Irish Sea lighthouse being towed to its final position or the rescue of two British lightkeepers stranded at their station for more than a month by rough seas.

Life provides a second form of access. By going to Google Images and entering the words "source:life" and then "lighthouse," we pull up a series of photographs that belonged to the magazine. And here's the beauty of it: they have not all been published. For instance, In 1951, the magazine published an article about lighthouse preservationists fighting for their "Little Red Lighthouse," otherwise known as Jeffrey's Hook. The article featured two images, but the photographer took many more. They're here in the digital collection.

Strangely, though, there are quirks. That same image search turns up a fantastic series of pictures of the family of Keeper Edward Frank at Wood Island Lighthouse in Maine in the 1950s, but the digital search through the archives does not reveal the resulting article. Secondarily, on a whim I entered a search for an unmistakable word - Scituate, as in Scituate Lighthouse - and found a beautiful series of pics taken during the 1937 Town Meeting, one of which featured a group of men sitting on a beach talking with Scituate Light in the background. It's obvious that not all keywording is perfect for our very focused search (non-lighthouse people, whoever they are, might not even know that's the lighthouse of the Army of Two in the background!), so we might have to think differently to outwit the search engine. Try "source:life hatteras" or "source:life Tillamook" and see what comes up.

We must always keep in mind that once we find the images of Life lighthouses, they do not belong to us, at least not commercially. Permission must be sought for their publication. And they will have a large LIFE logo in the bottom right-hand corner, to show their provenance.

Based on this research, made possible by the Thomas Tag Fellowship, the United States Lighthouse Society is proud to expand its digital online database to include links to approximately 50 lighthouse references in Life stories that either focus on lighthouses or reference them in an interesting way.

Check out the link at the top of this page to see the list that we compiled.