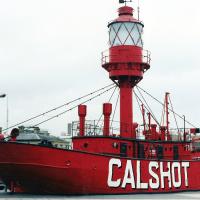 Lightships in America by Mike Boucher

Lightships in America span just 165 years: 1820 - 1985. They marked dangerous moving sandbars, shoals, low water, harbor entrance, river's mouth or a spot where a lighthouse could not be built. They could be moved around as a channel moved due to shifting sands. A total of 120 stations were established on America's coastlines and the Great Lakes. The number was always changing- some of these were for a short time while others were permanent. During 1909, a total 56 lightships were in use, the highest number ever placed in service. As times changed with technology, so did the number of lightship stations-until 1985 and the last lightship was replaced. From 1820 to 1952 (when the last lightship was built), 179 vessels were constructed with wooden hulls and sail powered ships, to iron hulls with diesel engines.

At a distance, the early schooner type light vessels were easily confused with other sailing vessels, making it difficult to get reliable bearings. Visual aspects of the lightships – the relative merits of various colors for the hull, superstructure and spars; the color and characteristics of the lights; and the color and shape of the daymarks – evolved through trial and error, expedience and tradition.

The Development of the American Lightship by James Delgado

Lightships were essential partners with America’s lighthouses as part of the federal government’s commitment to safe navigation on the nation’s coasts and on the Great Lakes. While the first American lighthouse dates to the colonial era, the use of lightships is a more recent 19th century phenomenon in the United States, though employed earlier in Europe. Moored over treacherous reefs, or marking the narrow approaches to a channel or harbor entrance where lighthouses could not be built or placed in areas too far offshore for a shore side lighthouse’s lens to reach, lightships were fewer in number than the estimated 1,500 lighthouses built in the United States. In all, 179 lightships were built between 1820 and 1952. In 1915, the heyday of U.S. lightships, there were 54 stations in the United States; 36 off the East Coast, 2 in the Gulf, 5 on the West Coast and 11 in the Great Lakes.

At the end of World War II, the Coast Guard took an inventory of the aids to navigation system that the USCG inherited just prior to the war. During the war, the Coast Guard was busy with port security escort duty in the Atlantic, landing craft duty in the Pacific theater, submarine patrols, and other duties.