The United States Lighthouse Society can make speakers available on a wide variety of lighthouse subjects. Whether you need a general introduction to lighthouses or a detailed technical essay on Fresnel lenses, our goal is to assist you with the type of speaker you need for your event. We can also provide photographs, drawings, etc. covering many lighthouse subjects.

Our speakers have made presentations across the country at a great variety of lighthouse events such as: the Maritime Heritage Conferences, regional lighthouse association meetings, libraries, colleges, the Michigan Lighthouse Alliance meetings, lighthouse transfer ceremonies, and more.

If your organization is holding an event where a lighthouse presentation would be appropriate please contact our Society and we will endeavor to assist you in finding a speaker.

Below are our presenters who can speak on a variety of topics.

In 1984 Wayne founded the U. S. Lighthouse Society, a national nonprofit society focusing on history and education with a stress on preservation and is currently the president of our Board of Directors. He is one of the pioneers of the lighthouse preservation movement and one of the foremost experts of lighthouse history in the U.S., and everyone fondly refers to him as the "Head Keep'".  Over the years he has been a member of numerous maritime-related organizations and has presented talks from coast to coast; from Key West, Florida to Block Island, Rhode Island; to the Shedd Aquarium in Chicago and numerous west coast organizations. He has appeared on numerous television and radio programs including National Public Radio, Good Morning America and CBS. Wayne has been written up in most U.S. newspapers as well as Life, Smithsonian, Americana, People and the Syracuse University Alumni magazine. Wayne has taught courses on the History of Lighthouses at the California Academy of Science and the University of North Carolina Asheville Reuter Center.

Talks on Lighthouses of various areas:

Henry is the Vice President of the U.S. Lighthouse Society and the Chairperson of the Society’s Preservation Grants & Awards Committee as well as the manager of the Thomas Point Shoal Lighthouse, located in the Chesapeake Bay. He has spoken at several national and international lighthouse conferences and can tailor a presentation in the following areas:

Ralph is a U.S. Lighthouse Society Board Member, and has over 30 years of cultural resource experience; much of it related to lighthouse preservation. Ralph was the project director for the team which moved, renovated, and interpreted the 1883 Drum Point Lighthouse, at Calvert Marine Museum, Solomons, Maryland, between 1974 and 1977. He also served as historian for several assessment teams which surveyed 31 historic lighthouses located throughout the United States for the Department of Defense, U.S. Coast Guard, and the Bureau of Land Management in 1995 and 1996. 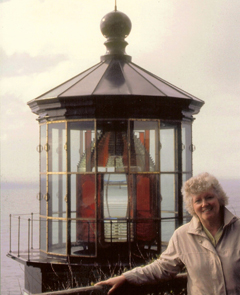