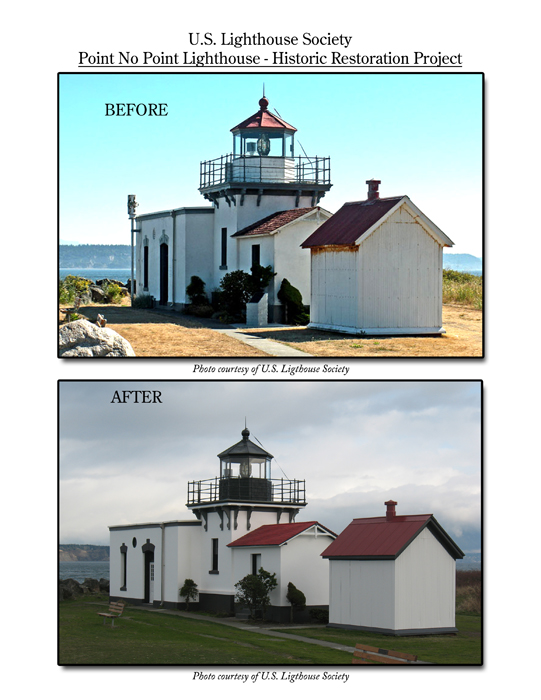 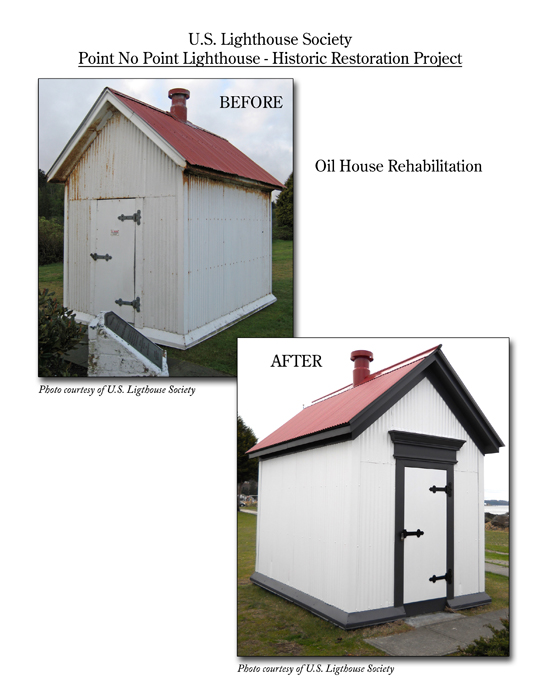 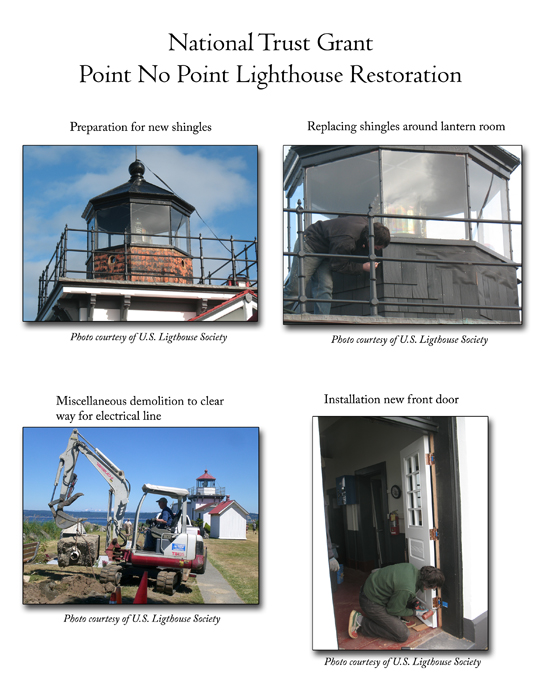 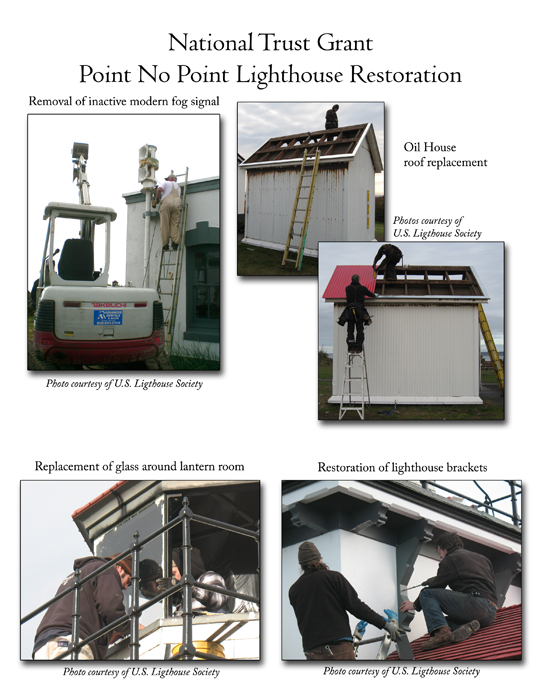 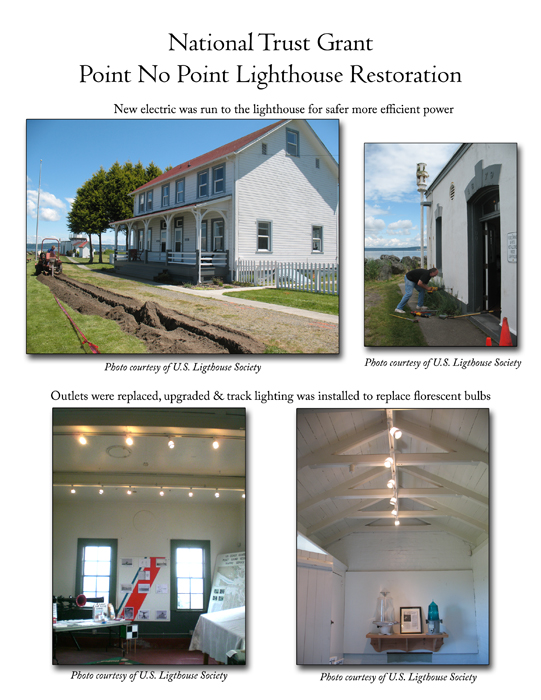 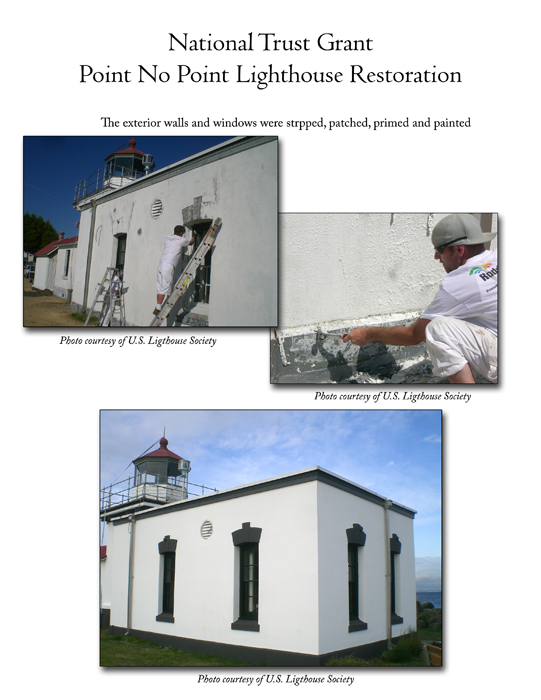 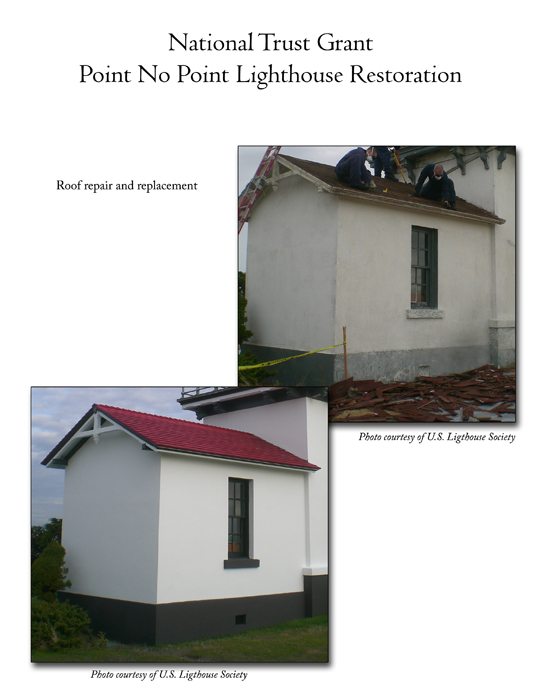 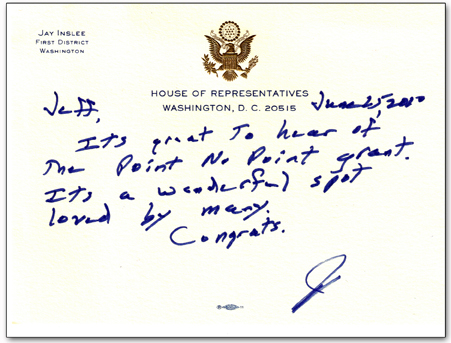 The History of the Point No Point Lighthouse

Point No Point is situated on the northeastern most point of Kitsap County, one and a half miles east of Hansville. This low sandy spit, which extends over a quarter of a mile into the water, marks the entrance to Puget Sound from Admiralty Inlet. Point No Point was named in May 1841 by Lieutenant Charles Wilkes (1798-1877), commander of the U. S. Exploring Expedition, for a similarly named landmark in New York's Hudson River. Mariners thought the name highly appropriate because the point was hard to see from the deck of a ship and was too shallow and muddy for anchorage.

The local Indians referred to this point as Hahd-skus, meaning 'long nose." This was the site of the Point No Point Treaty between Washington Territorial Governor Isaac Ingalls Stevens (1818-1862) and the S'Klallum, Chimacum and Skokomish tribes on January 26, 1855. The meeting was attended by 1,200 Indians. In exchange for ceding "the land lying from the crest of the Olympic Mountains to Puget Sound" to the U. S. Government, the Indians were paid $60,000 in annuities, plus $6,000 for moving expenses, and assigned to a 4,987-acre reservation on the Skokomish River at the head of Hood Canal in Mason County. In 1955, the Kitsap Historical Society affixed a bronze plaque to a large boulder near the lighthouse, commemorating the Point No Point Treaty centennial.

A Shoal Known for Shipwrecks

In 1872, the Lighthouse Board, expecting vessel traffic to increase around Puget sound when the Northern Pacific Railroad reached Tacoma, recommended that Point No Point be marked with a light and fog signal. The bark Iconium had run aground in the fog in 1868 and the bark Windward, trying to avoid the shoal, was wrecked on Whidby Island in December 1875. A beacon and fog signal were considered essential to maritime safety.

In 1877 Congress finally appropriated $25,000 for the project, but construction was delayed by a disagreement over the best location for the facility. The Lighthouse Service believed that Foulweather Bluff, 3.5 miles northwest of Point No Point was the best location. The Lighthouse Board thought that the Point No Point spit was more appropriate for a lighthouse; the board won. A further delay occurred because the point's owners were asking an exorbitant price for the land.

Francis James of Port Townsend owned Point No Point. James, a town councilman and store owner, had been a lighthouse keeper at Cape Flattery but was removed in 1859 for not keeping a "proper light." Perhaps because of animosity toward the Lighthouse Board, James was reluctant to sell the property. But in April 1879, he finally gave in, and sold 40 acres of land to the Lighthouse Service for $1,800. The side-wheeler S. S. Shubrick, a 140-foot lighthouse tender, delivered building materials to the point and construction of the light station began immediately.

The first lighthouse keepers, Dr. John S. Maggs, a Seattle dentist, and his assistant, Henry H. Edwards, arrived at the Point No Point Light Station in mid-December 1879. But construction of the buildings had not been completed, and neither the glass storm panes for the lantern room nor the Fresnel lens for the beacon had been delivered. In the interim, Maggs marked the point with a "post lantern," used at many locations until a permanent lighthouse could be built. The lighthouse was supposed to be commissioned on January 1, 1880, and Maggs was determined there would be a light burning in the 30-foot tower.

Hanging canvas over the south window frames to keep out the wind, Maggs placed a common kerosene lantern on the lens pedestal in the lantern room. Maggs and Edwards battled the wind and cold to maintain the light until the storm panes and the fifth-order Fresnel lens arrived. Meanwhile, the carpenters, with the assistance of Maggs and Edwards, hurried to finish the incomplete buildings in anticipation of the arrival of Maggs's pregnant wife Caroline.

On January 10, 1880, the fifth-order Fresnel lens arrived and was installed in the Point No Point Lighthouse. Fresnel lenses capture and direct light by prismatic rings to a central bull's-eye where it emerges as a single concentrated beam of light. A fifth-order Fresnel lens, used mainly for shoals, reefs, and harbor entrance lights, is one foot, eight inches high, has an inside diameter of one foot, three inches, and weighs approximately 300 pounds. The light at Point No Point, illuminated by a kerosene lamp and 27 feet above grade, was visible for about 10 miles.

On February 1, 1880, storm panes for the lantern room finally arrived and were installed, making the lighthouse fully operational. Shortly thereafter, the keeper's house, a duplex, was completed, and Mrs. Caroline Maggs arrived at the station. By April, a fog bell, previously used at the New Dungeness Lighthouse, was also in place. The 1,200-pound bronze bell, cast in 1855 at the J. Bernhard Foundry in Philadelphia, used a large clockwork mechanism with descending weights, called a Gamewell Fog Bell Striking Apparatus, to activate the striker. During fog, the mechanism had to be rewound every 45 minutes and when the machinery broke down, as it often did, the lighthouse keepers had to strike the bell manually with a large hammer.

On April 1, 1880, the lighthouse tender Shubrick arrived at the new Point No Point Light Station with inspectors Captain George Reiter and H. S. Wheeler aboard to make the Lighthouse Service's final inspection. The station consisted of the square 30-foot light tower and attached office constructed of brick and stucco, a metal oil house, a wooden structure housing the fog bell's clockwork mechanism, and a large, two-story station keeper's house.

For more information about the
Point No Point Lighthouse or the U.S. Lighthouse Society,
please contact us:
Email: info@uslhs.org
Phone: (415) 362-7255