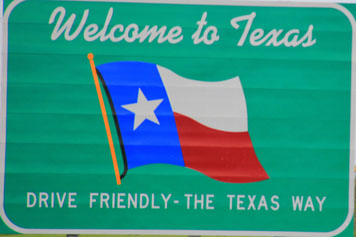 The 2012 USLHS Texas Tour was the Society's first tour of the lighthouses of Texas. It covered the entire coast line from Port Isabel to Sabine Pass, Louisiana, a distance of almost 400 miles.

Tour group photo in front of the 1852 Port Isabel Lighthouse

A close up of the Texas Tour group

Many tour participants arrived a day early to enjoy the sights of San Antonio, the 7th largest city in the U.S. One of the most famous attractions is the River Walk, a network of walkways along the banks of the San Antonio River, beneath streets of the downtown area.

Another iconic landmark in San Antonio is the 1929 Majestic Theatre. The theatre, which originally seated 4,000 people, is the home of the San Antonio Symphony. For many years it was the largest theatre in Texas and the second largest movie theatre in the U.S.

Kay, Ron & Judy get reacquainted at the welcome dinner reception.

The tour's first stop was at the Alamo. We arrived there on March 5, one day before the 176th anniversary of the fall of the mission in 1836.

The Alamo Gift Museum was built in 1936, to commemorate the 100 year anniversary of the Battle of the Alamo.

The Alamo Heroes statue identifies all 189 men who died at the Alamo including such famous names as Davy Crockett and William Travis. The inscription reads in part "They chose never to surrender nor retreat, these brave hearts with flag still proudly waving, perished in the flames of immortality that their high sacrifice might lead to the founding of This Texas"

During the 18th century, the Spanish established a chain of missions along the San Antonio River. These missions became the foundation for the city of San Antonio. Pictured here is, Mission San Jose, the largest and best restored of the missions in Missions National Park.

Mission San Jose is known as the "Queen of the Missions" from the fine carvings on the façade of the church.

Myrna, Norm and Al looking to get the NPS cancellation stamp for the San Jose Mission.

The first of many Dairy Queen stops was in the thriving community of Three Rivers, Texas.

Our tour of one of the largest ranches in the world, the 825,000 acre King Ranch, included real Texas longhorns and culminated with a dinner in a genuine cowboy camp house.

Clark checks out the "cowboy grub" served up at the camp house BBQ.

The first lighthouse on the tour, the Port Isabel Lighthouse, is the only lighthouse in Texas that is open to the public.

A view of Port Isabel from the bridge to South Padre Island with one of those signs you don't see very often ("Watch for Pelicans When Flashing")!

Nina & Dick take a break in front of one of the several museums we visited in Port Isabel.

Glen, Myrna and Kay enjoying a brew with their lunch at the Pirates Landing Restaurant.

I think this is our tour guide! Arrrggghhh!

The Brazos Santiago Lighthouse replaced the Port Isabel Lighthouse after it was decommissioned in 1905. When it burned down in 1940, the 5th order lens was transferred to this Coast Guard Station on the southern tip of South Padre Island. The light is no longer in use and a new Coast Guard Station was built nearby.

The second of our Dairy Queen stops in two days! It is obvious that Glen's side of the bus did not get off the first!

Boarding an eco-tour boar for our ride to the Aransas Pass (Lydia Ann) Lighthouse.

Randall, shown here eating one of the oyster exhibits on board!

Thanks to owner, Charles Butt, we were granted access to the grounds of the Port Aransas Lighthouse.

Previous keeper, Rick Pratt, provided a history behind the ongoing restoration and preservation of this light station. Rick is now the Director of the Aransas Pass Museum.

While at the lighthouse we had time to relax and were even treated to a nice spread of fruits, pastries and cold cuts - courtesy of Mr. Butt who owns one of the largest grocery chains in the state of Texas.

A real bonus for Judy, Glen and Dick was the opportunity to climb the Lydia Ann tower.

The keeper's quarters at Aransas Pass.

Rick Reichenbach, the current keeper at Aransas Pass along with the former keeper, Rick Pratt. They joked that in order to be a keeper at this lighthouse; your first name had to be Rick!

After our visit to the lighthouse we stopped by the Aransas Pass Museum to view the 4th order lens from the tower.

The Texas Maritime Museum Lighthouse, an active aid to navigation, was completed in 2001 and provides panoramic views of Rockport Harbor, Aransas Bay and the Intercoastal Waterway.

A stop at the Calhoun County Museum in Port Lavaca provided an opportunity to see the 3rd order lens from the Matagorda Island Lighthouse which we were to visit the next day.

The Bauer Community Center in Port Lavaca is now the home of the restored 1852 Half Moon Reef screwpile lighthouse.

We boarded some fast moving fishing boats to get to Matagorda Island. Since the ferry burned several years ago, this is the only way to get to the island.

Mary, Clark, Myrna and Anita were in the second wave of fishing boats transporting us to the island.

If you don't think those fishing boats can fly - check Norm's hair on his ride to the island!

Thanks to Matt Nelson of the Texas Parks & Wildlife Department we got a lift for the last three miles to the Matagorda Island Lighthouse.

The lucky ones rode in the back of the truck. Those not quite so lucky rode in the trailer. Our fearless guide rode IN the truck!

The distinctive long, straight neck on an otherwise conical tower of the Matagorda Island lighthouse was a result of raising the lantern room 24 fee to increase the range of the light.

No one was more prepared for mud and mosquitoes than Al.

Cameras clicked away as the group took advantage of this rare opportunity to get up close to this lighthouse.

The ride back from Matagorda Island was just as exciting as the ride to the island.

The Brazoria County Historical Museum in Angleton houses part of the clam shell lens from the Brazos River Lighthouse.

Here the group photographs the lantern room from the Brazos River Lighthouse on display outside of the Brazoria County Historical Museum.

In 2000, a violent storm toppled the Galveston Jetty Lighthouse into the water. The lantern room was rescued and dedicated as part of Beacon Square at the entrance to Galveston College in 2006. It seems an appropriate location since the college's vision is "A Beacon of Light Guiding Lifelong Learning."

These folks are not looking for a contact lens - They are just trying to get a unique angle shot of the Galveston Jetty Lantern!

A mini group shot after dinner in Galveston.

While many helped to load and unload the luggage from the bus Norm and Bob were the two "super bag boys!" Here, Norm performs his morning duty.

In 1854 the U. S. Government erected a screwpile lighthouse in the bay two miles east of Shoal Point at Half Moon Shoal with a 6th order Fresnel lens. It was destroyed in 1900, but in 1998 this scale-model replica of the lighthouse was constructed with funds partially provided by the Rotary Club of Texas City, Texas City Rotary Foundation, and Texas Parks & Wildlife Department.

Despite the rain, we were able to get some photos of an unusual faux light which is also a water tower in Kemah, Texas. The 144 foot tower is topped with a replica of a 3rd order rotating Fresnel lens.

Rear Admiral Alan Shepard influenced the selection of a black-and white-banded lighthouse as the primary symbol for South Shore Harbour--a reminder of the Cape Canaveral Lighthouse, which was the last sight on Earth that Shepard recalled seeing as he blasted off into space.

Before catching the ferry to the Bolivar Peninsula, the group enjoyed a buffet lunch at Mario's Seawall Restaurant in Galveston.

Our first photos of Bolivar Point were taken from across the highway. We thought this was as close as we were going to get.

Thanks to the efforts of our Executive Director, Jeff Gales, we were granted access to the Bolivar Point property for an up close look at the lighthouse.

Here the group discusses the status of the restoration of the keeper's quarters and lighthouse with current owner, Mike Maxwell, who was kind enough to take the time to show us around the Bolivar Point property.

Both of the keeper's dwellings at Bolivar Point were destroyed in 1915. When rebuilt, the new dwellings were placed on pilings to keep them above any future storm surge.

The 117 foot iron tower became the refuge for 120 people who sought safety there during the great hurricane of 1900. Seated by twos on the tower's spiral staircase they huddled together as 120-mile-per-hour winds rocked the tower. A look inside the tower made one realize just how tight the quarters must have been.

Mary Lee, Judy & mascots, Bosley and Ferdinand inside the Bolivar Point lighthouse. Note that Boz is still wearing the lei he acquired on the Hawaii tour last year!

Even after stopping at 3 Dairy Queens, Bill and Bob still found time for another ice cream at Stuckey's.

Larry's French Market and Restaurant provided for a real "cultural experience." Here Ken and Dianne cut a rug to the sounds of a Swamp pop band. This musical genre indigenous to the area of southeast Texas we were visiting was created in the 1950s by teenaged Cajuns and black Creoles, it combines New Orleans-style rhythm and blues, country and western, and traditional French Louisiana musical influences.

Members of the Cameron Preservation Alliance provided us with transportation down some muddy roads in order to get a close up view of the Sabine Pass Lighthouse.

The group was not deterred by mosquitoes or mud or alligators in their quest to get near the Sabine Pass Light.

The lighthouse is separated from the land by a bayou making access to the tower difficult.

The Sabine Pass Lighthouse was built in 1857 on soft marshland. The foundation included eight buttresses extending from the base of the tower to distribute its weight over a larger area. The tower tapers to a conical dome reminding one of a rocket getting ready for liftoff.

A "partial" group shot at Sabine Pass Lighthouse. Not pictured are some who chose to avoid the mosquitoes by staying in the vans and cars!

A group shot of our new friends from the Cameron Preservation Alliance who provided wonderful hospitality and transportation to the Sabine Pass Lighthouse.

This 3rd order lens, manufactured by Barbier, Benard, and Turenne from the Sabine Bank Lighthouse, is now housed at the Museum of the Gulf Coast in Port Arthur.

While the Museum of the Gulf Coast visit was primarily to view the 3rd order lens from Sabine Bank, the group was pleasantly surprised at the other wonderful exhibits found in this Port Arthur gem. Among those exhibits was a tribute to the music greats from the area, including Janis Joplin, who was born in Port Arthur. Depicted here is a recreation of her famous 1965 Porsche 356-C Cabriolet.

The top section of the lighthouse tower and the lantern room from the Sabine Bank lighthouse are now on display at Lions Park in Sabine Pass, Texas.

Even the church in Sabine Pass, which still shows signs of hurricane damage, has it own "light."

While the number of lighthouses was small, the adventures to reach them were memorable!