Group photo in front of the beautiful Wind Point Lighthouse near Racine, Wisconsin 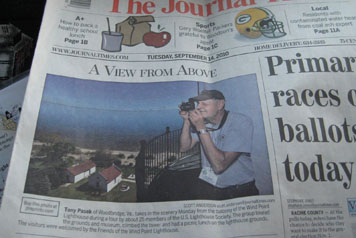 The Society tour makes the local paper, "The Jounal Times". In the photo is Tony at the top of Wind Point lighthuose.
Photo by Linda Elliot

Close up of group at Wind Point

Getting to know each other at the welcome dinner - Joyce, Patricia, Tony, Alma and Skip

North Point Lighthouse, Milwaukee. Note how the old tower was "stacked" on top the new section when the trees obscured the view from the lake

North Point was the first of several lighthouses we climbed. Cathleen appears to be happy she is on her way DOWN!

Getting our Passports stamped is a critical part of the visit to each lighthouse. Here, Jim and Mary stamp their own books at North Point

Milwaukee Breakwater Lighthouse - One of the few breakwater lights where the keepers stayed in the lighthouse, rather than servicing it from shore

Milwaukee Pier light (with the breakwater light in the background

Racine Harbor - The original lighthouse is one the right, while the old life saving station is on the left. Both part of a former Coast Guard station - now they are part of Pugh Marina

The lens from the Southport tower

Mary Lee and Patricia pose in the doorway of the Southport tower, one of the many on Southern Lake Michigan built of Cream City brick

Al King joined some of the group (Patricia, Mary Lee & Steve) the night before the Chicago Harbor cruise for dinner at the famous Gino's East

Many on the tour chose to dine on the deep dish pizza at Gino's East. It was marvelous!!

Our favorite "hat" lady, Patricia, shows off a new hat with Steve

Sylvia, Shirley and Joyce waiting for Vern to return with the bus to pick us up at Grosse Point

Skip poses with one of our mascots, Quackers, at Bubba Gump's

After lunch at Bubba Gump's, everyone got a chance to wander around the shops and sights of Navy Pier 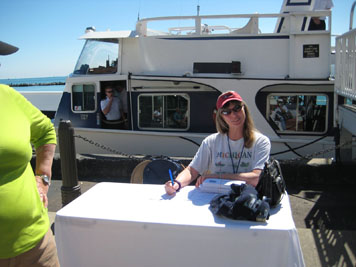 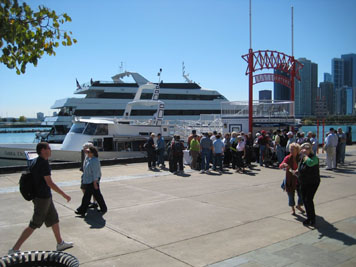 The dock where Society members boarded the Anita Dee, what a beautiful day!
Photo by Linda Elliot 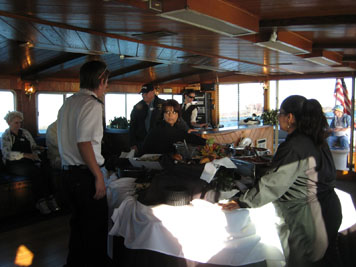 The WINDY, a 148 foot four masted schooner, sails past the Chicago Harbor Lighthouse

One of the highlights of the harbor cruise was the up close views of the water intake cribs and their light towers. Here we are passing the first crib, the Four Mile Crib

There was plenty of sunshine on the top deck of the Anita Dee as we headed down the coast toward Indiana. Things were pretty calm in this picture, but things started rocking and rolling later!

The colorful Harrison-Dever Crib - Many thought the one on the right looked like a giant birthday cake. Others said the whole thing looked like something from the circus!

Don and Dot, two members who joined the tour for the Anita Dee cruise enjoying the fresh air

Shirley, Susanne, Dorothy, Clarice, Retta and Skip relax between lighthouses on the cruise

Indiana Harbor East Breakwater erected in 1935 to guide freighters into Indiana Harbor. This modern structure is a twin to the tower placed at Port Washington, Wisconsin

Calumet Harbor lighthouse where the Anita Dee found a safe, calm harbor so that those on board could eat dinner without falling down!

Mary enjoying the calm waters, in line for dinner

The light tower on the 68th Street water intake crib

The Chicago skyline on our return trip
Photo by Charlie Feld

The Michigan City Pier lighthouse with its well preserved catwalk

Lee and Sylvia enjoying some beautiful weather in Michigan City

We found our way down to the South Haven lighthouse with the help of Rachael, a friendly employee of the Grand Haven Chamber of Commerce

Clarice catches a ride out to the Holland Harbor Lighthouse

Mary Ann shows how both she and Skip could fit inside here tour t-shirt prize!