The name Lake Erie is a shortened form of the Iroquoian word erielhonan meaning “Long Tail”.

We start this tour in Detroit, Michigan, commonly known and referred to as THE Motor City. From Detroit we cross the border into Windsor Canada and travel along the northern coast of Lake Erie ending at Niagara Falls and Buffalo, New York.

The Lake Erie area has a rich and colorful history that can be traced back over millennia. Fort Erie, for example is the local site of the War of 1812, and is one of the most significant historic landmarks in the area. Fort Erie saw considerable action in the War of 1812 including the capture of two American ships, the 'Ohio' and the 'Somers'.

Port Stanley’s uniqueness lies in natural attractions such as Kettle Creek and the historic King George VI Lift Bridge, the oldest in Ontario, located in the center of town.

Niagara Falls formed by the melt water from the Wisconsin Glacier over 12,000 years ago, flows majestically at the crossroads of the United States and Ontario, Canada. On the Ontario side, the Horseshoe Falls span a distance of nearly 0.8 kilometers (0.5 miles), stand 17 stories high and push 155 million liters (34 million gallons) of water per minute over the brink into the raging Niagara River below.

Come and join us on this tour, not only are we going to see some Lighthouses not offered on any previous tour but we will feel the awesome power of Niagara Falls as rushing river waters plunge over its mighty brink.

Note: This tour starts in Detroit Michigan and ends in Buffalo New York

A valid passport is required. 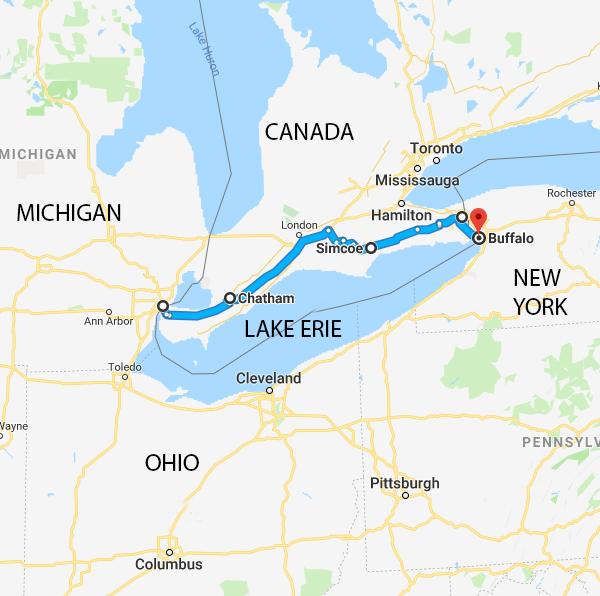