If your Mediterranean fantasies feature balmy days by sapphire waters in the shade of ancient walled towns, and lighthouses, Croatia is the place to turn them into reality.

The first thing that strikes you is the remarkable clarity of the water. When it's set against a dazzling white pebbly beach, it sparkles with a jewel-like intensity in shades of emerald and sapphire. But if you shift your gaze from the glittering waters chances are an almighty mountain belonging to the Dinaric Alps will loom into view.

Precariously poised between the Balkans and central Europe, this land has been passed between competing kingdoms, empires and republics for millennia. If there's an upside to this continual dislocation, it's in the rich cultural legacy that each has left behind. Venetian palazzi snuggle up to Napoleonic forts, Roman columns protrude from early Slavic churches, and Viennese mansions face off with Socialist Realist sculpture. Excellent museums showcase treasures that cover the gamut of European history, from the prehistoric to the post-communist, telling a story that is in equal parts fascinating and horrifying.

You will be able to climb 9 of the lighthouses: Sveti Andrija, Glavat, Stoncica, Blitvenica, Tajer, Veli Rat, Porer, Sveti Ivan, Saduvrija.  You will view 10 more picturesque lights. The best place to see pictures of the lighthouses and get some facts about them is the website of the Croatian Lighthouse Authority.

Croatian wines and olive oils are making their mark on the world stage, garnering top awards. Because of this you will become acquainted with the refrain 'Jedi! Jedi! Jedi!' (Eat! Eat! Eat!).

Don’t fill your life with days, fill your days with life. Come Join us on this fabulous adventure.

We will be touring and climbing 11 lighthouses, courtesy of the Croatian lighthouse authority, and nine of those are located on tiny offshore islets. In fact, we will be on a boat or at least a ferry almost every day of the tour. We will also have the opportunity to see and take pictures of ten other lighthouses – but not tour/climb them – from our ferries, boats or with short bus stops. Most of the lighthouses were built in the 1870s and 1880s, but one of them goes back to 1833.

The tour will start at the southern end of Croatia, in the historic walled city of Dubrovnik, and we will make our way north along the coast for 11 days, ending the tour in Trieste, Italy (two hours from Venice). We will even drive through a coastal sliver of Slovenia before arriving in Trieste and see the few pier lights in that country.

There will be some rest time in the middle of the tour with two days in historic Split, where we will visit Roman Emperor Diocletian’s Palace and stroll through the picturesque town of Trogir, which are two of the five UNESCO World Heritage sites we will see on the trip.

Members are on their own to visit Venice or fly back to USA from Venice (2 hours from Trieste); coach bus will be arranged to go to Venice/Airport 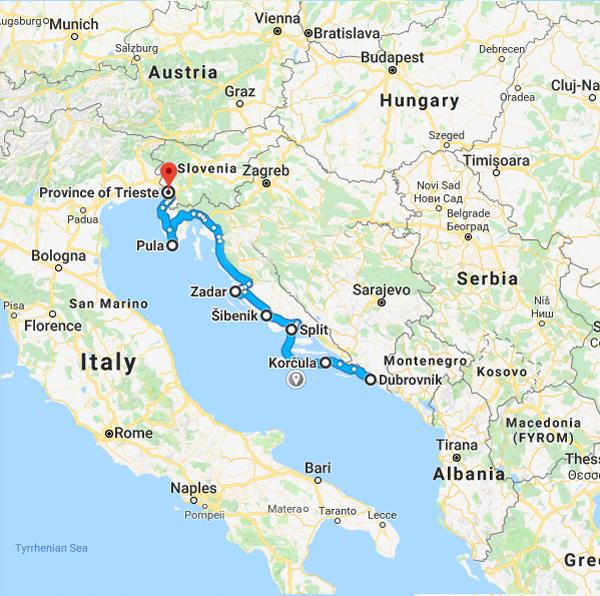