The essence of mainland Australia and its smaller cousin Tasmania will be discovered by spending time in their thriving, cosmopolitan cities and undertaking an epic journey along their awe-inspiring coasts.

Our trip begins in Sydney and then it is off to Melbourne followed by Launceston and Hobart Tasmania.  We then fly back to Melbourne and off by coach to Adelaide.  We stop at Ayres Rock (Uluru) at Alice Springs where we will experience the ever-changing colors of Uluru at sunset in the desert before heading back to Sydney.  And just because this is what we do we will see 45 lighthouses along the way plus an additional 11 lighthouses if you take the optional helicopter tours.

You will have the opportunity to see the Sydney Operas House, climb 440 feet to the top of the Sydney Harbour Bridge, and take in the cultural and culinary delights as well as seeing the 19th century penal settlement at Port Arthur sitting on the Tasmania peninsula.  However, no floggings will be allowed.  At Cleland Wildlife Park we will listen and learn about Ancient Dreaming stories, cuddle Koalas, feed Kangaroos and you can even hold a snake if you are so inclined.

So come join us down under in the land of Crocodile Dundee, the Tasmanian Devil and of Koalas.

Day 10   Monday 14 November 2022 - George Town – Rocky Cape - Wynyard
0630    Breakfast -
0800    Enjoy a relaxed breakfast before departing for Highfield Point Lighthouse, Stanley. Spend some free time exploring here and tour the lighthouse.
1000   Travel back towards Rocky Cape where we will then visit the Rocky Cape Lighthouse, sitting on a spectacular headland in the National Park,
1130   Move onto Table Cape Lighthouse.
1230   Depart for hotel in Wynyard for the evening and an included dinner.
1900    Dinner at hotel

Day 11    Tuesday 15 November 2022 - Wynyard - Launceston
0630    Breakfast
0800    Transport to Tasmania
1000    Depart along the coast stopping at Round Hill point Lighthouse overlooking the harbour at Burnie and Mersey Bluff Lighthouse near Devonport.
1200    Enjoy some free time for lunch in Devonport
1230    Depart for Launceston for the night.
1400   Spend your afternoon at leisure exploring this riverside city, one of the oldest cities in Australia. (Suggestions - visit the Queen Victoria Museum or take a 15 minute walk (approximately) to Cataract Gorge, a natural attraction along the banks of the Tamar River).
1600    Depart for hotel in Launceston
1900    Dinner

Day 12     Wednesday 16 November 2022 - Launceston - Hobart
0630    Breakfast
0730    It will be an early morning today for a full days travel to Hobart. We will visit the Cape Tourville Lighthouse in the Coles Bay conservation area and Freycinet National Park. We will stop at the new lighthouse at Point Home, near Triabunna.
1300    Lunch
1400    Continue onto Hobart, Tasmania’s capital city for the next three nights. Dinner tonight at your hotel.
1900    Dinner

Day 13     Thursday 17 November 2022 - Hobart
0630    Breakfast at hotel
Free Day to explore Hobart.  Today is yours to spend at leisure in Hobart. It is a Saturday so you may wish to wander through the famous Salamanca Market. A vibrant outdoor market with more than 300 stalls showcasing arts, crafts, jewelry, fresh food and produce, collectables and homewares.
Lunch and Dinner will be on your own.

Day 14    Friday 18 November 2022 - Bruny Island Full Day Sightseeing
0630    Breakfast at Hotel
0800    We will be split into smaller coaches for a full day food, sightseeing & lighthouse tour to Bruny Island today. We will be guided through the Mount Mangana rainforests in search of White Wallaby in the wild, cross and climb the narrow sandy isthmus known as The Neck and Wildlife Zone and onwards to the Cape Bruny Lighthouse Station. Here we will be split into groups and join Australia’s southernmost Lighthouse Tour. The Iconic Cape Bruny Lighthouse is the only Southern Tasmanian Lighthouse open for Tours. We will climb the original wrought iron spiral staircase to the top of the tower and step out onto the balcony to take in the breath taking views of the sweeping southern ocean to the wild Tasman Sea, South East Cape, Whale Head and the small islands dotting the coastline. For lunch, choose from an extensive menu of locally caught fresh fish, succulent local lamb, salmon, seafood chowder or the popular seafood platter for two.
1900    Dinner at hotel

Day 19    Wednesday 23 November 2022 - Adelaide
0630    Breakfast
0800    Included Helicopter Flight to see many lighthouses.  This tour will only take the morning so the rest of the day and evening is yours to do as you please.
Lunch and Dinner on your own.

Day 21     Friday 25 November 2022 - Uluru
0500 - Visit Uluru at sunrise to witness how the sunlight plays with the landscape and how the colours change. Depart the viewing point & return to the hotel for breakfast. After a short break begin the tour of the base of Uluru, experiencing the Mutitjulu waterhole walk & Mala walk. Hear the explanations of the native Aboriginal rock paintings and the stories behind them. Your guide will also explain the cultural significance of this natural wonder to the local people. Visit the Cultural Centre before returning to your hotel. In the afternoon you will travel to Kata Tjuta, also known as the Olgas.
Make a stop at the lookout point before walking through Walpa Gorge. From here you will return to Uluru and the best viewing spot to witness the sunset.
Lunch and Dinner on your own 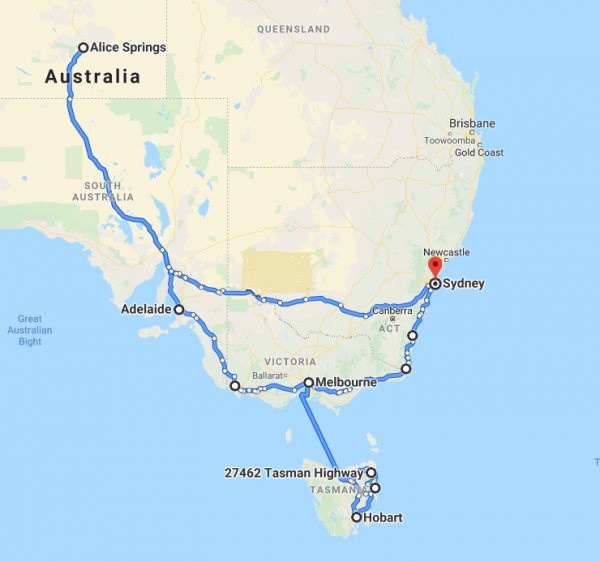