Death of a Keeper on the Eddystone

In 1705 following the destruction of the first Eddystone lighthouse built by Henry Winstanley in England, Captain Lovett acquired the lease of the Eddystone rock for 99 years, and by an Act of Parliament he was allowed to charge all ships passing a toll of 1 penny per ton, both inward and outward. His designer was a man named John Rudyerd, who was a silk mercer on Ludgate Hill; the trade of scientist or engineer did not really exist then and problems relating to those fields were approached by people as hobbies rather than professions. It seems remarkable that such a person with no experience or proven knowledge of the subject should be selected to undertake such a difficult and dangerous task. Taking a shipbuilder's rather than a house builder's approach he came up with a design based on a cone. His final wooden tower, lit in 1709, proved much more serviceable than the first tower built by Henry Winstanley. 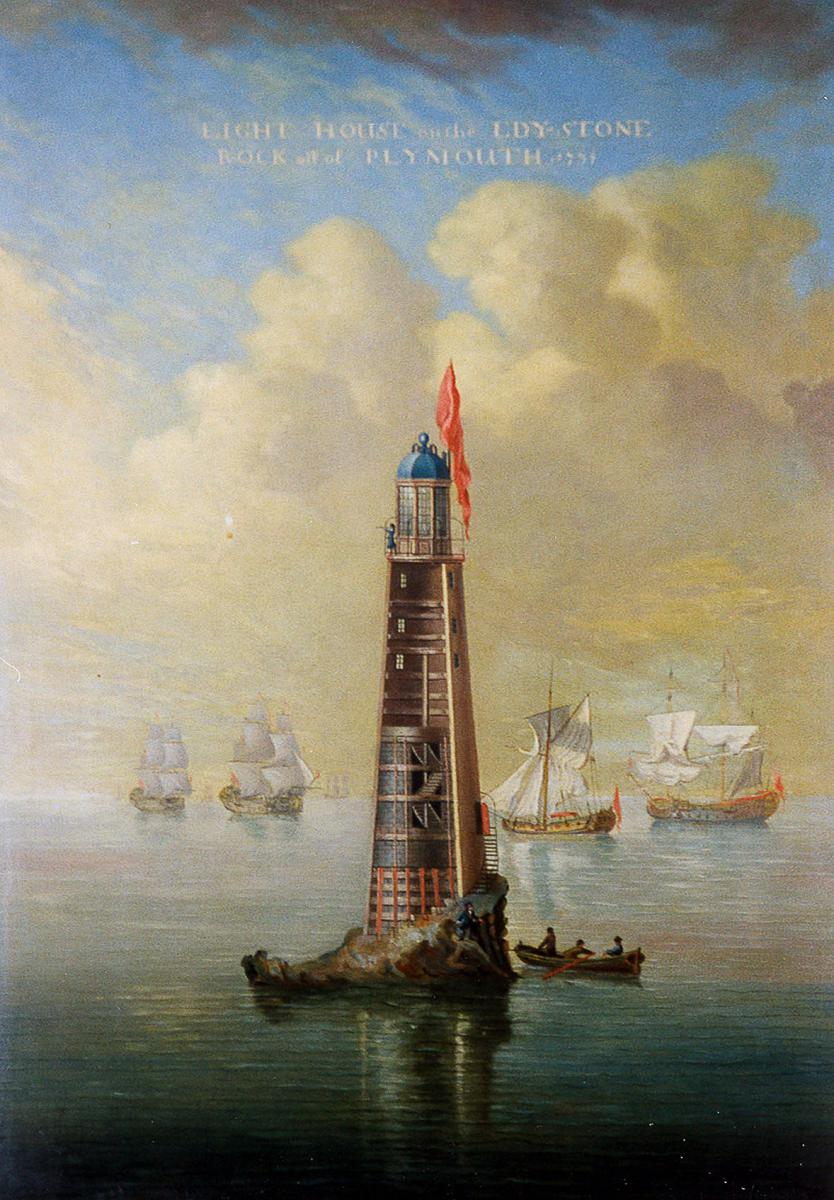 The lighthouse stood for 47 years. On the night of December 2, 1755, the top of the lantern caught fire, probably through a spark from one of the candles. Henry Hall, the keeper on watch, who was 94 years old but said to be `of good constitution and active for his years', did his best to put out the fire by throwing water upwards, four yards higher than his head, using a bucket. Hall was soon joined by the other two keepers who also tried to extinguish the fire. Hall looked up to check the progress of the fire and while doing so he was showered with falling molten lead from the lantern roof. The lead fell upon his body burning his head, face, neck and shoulders. As his mouth was open whilst looking up some of the molten lead ran down his throat. Hall later recalled that he felt the hot lead go down his throat and screamed, "My God, I'm on fire inside! He and the other keepers battled continuously against the fire, but they could do nothing as the fire was above them all the time - as it burnt downwards it gradually drove them to the base of the tower and out onto the rock. The fire was observed from the shore by a Mr. Edwards, ‘a man of some fortune and more humanity’. The old account says, he sent off a boat, which arrived at the lighthouse at 10 am after the fire had been burning for 8 hours. The sea was too rough for the boat to approach the rock so they threw ropes and dragged the keepers through the waves to the boat. The lighthouse continued to burn for 5 days and was completely destroyed. 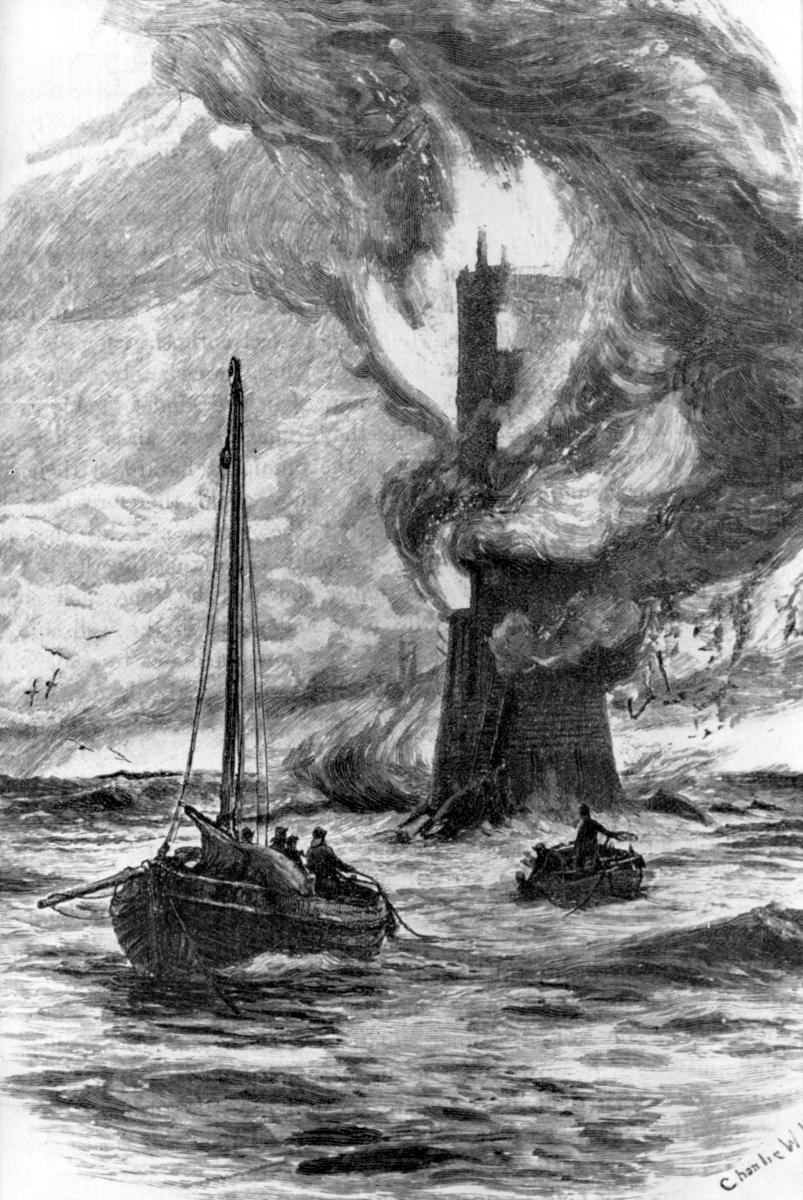 Henry Hall lived for 12 days after the incident, and a Doctor Spry of Plymouth who attended him made a postmortem and found a flat oval piece of lead in his stomach. Dr. Spry wrote an account of this case as follows:

On Thursday the fourth of December, 1755, at three in the afternoon, Henry Hall, of East-stone-house, near Plymouth, aged 94 years, of a good constitution, and extremely active for one of that age, being one of the three unfortunate men, who suffered by the fire of the lighthouse at Eddystone, nine miles from Plymouth, having been greatly hurt by that accident, with much difficulty returned to his own house. I being sent for to his assistance found him in his bed, complaining of extreme pains all over his body; especially in his left side, below the short ribs, in the breast, mouth and throat. He said likewise, as well as he could, with a hoarse voice, scarce to be heard, that melted lead had run down his throat into his body.

Having taken the proper care of his right leg, which was much bruised and cut on the tibia, I examined his body, and found it all covered with livid spots and blisters; and the left side of the head and face, with the eye, extremely burnt; which having washed with linen dipped in an emollient fomentation, and having applied things used in cases of burning, I then inspected his throat, the root of tongue, and the parts contiguous, as the uvula, tonsils, etc. which were greatly scorched by the melted lead. Upon this I ordered him to drink frequently of water-gruel of some such draught; and returning to my own house, sent him the oily mixture, of which he took often two or three spoonfuls.

The next day he was much worse, all the symptoms of his case being heightened, with a weak pulse; and he could now scarce swallow at all.

The day following there was no change, except that, on account of his too great costiveness, he took six drachms of manna dissolved in an ounce and half of infusion of senna, which had no effect till the day following; when just as a clyster was going to be administered, he had a very fetid discharge by stool.

That day he was better till night, when he grew very feverish.

The next day, having slept well the preceding night, and thrown up by coughing a little matter, he was much better.

He began now to speak with less difficulty, and for three or four days to recover gradually; but then suddenly grew worse; his pulse being very weak: his side, which grew worse daily from the first, now reddened a little and swelled; to which I applied the emplaster of gums. But all methods proved ineffectual, for the next day being seized with cold sweats and spasms in the tendons, he soon expired.

Examining the body, and making an incision thro’ the left abdomen, I found the diaphragmatic upper mouth of the stomach greatly inflamed and ulcerated, and the tunica in the lower part of the stomach burnt; and from the great cavity of it took out a great piece of lead of the shape and weight here described.

It will perhaps be thought difficult to explain the manner, by which the lead entered the stomach: But the account, which the deceased gave me and others, was, that as he was endeavoring to extinguish the flames, which were at a considerable height over his head, the lead of the lanthorn being melted dropped down, before he was aware of it, with great force into his mouth then lifted up and open, and that in such a quantity, as to cover not only his face, but all his clothes. 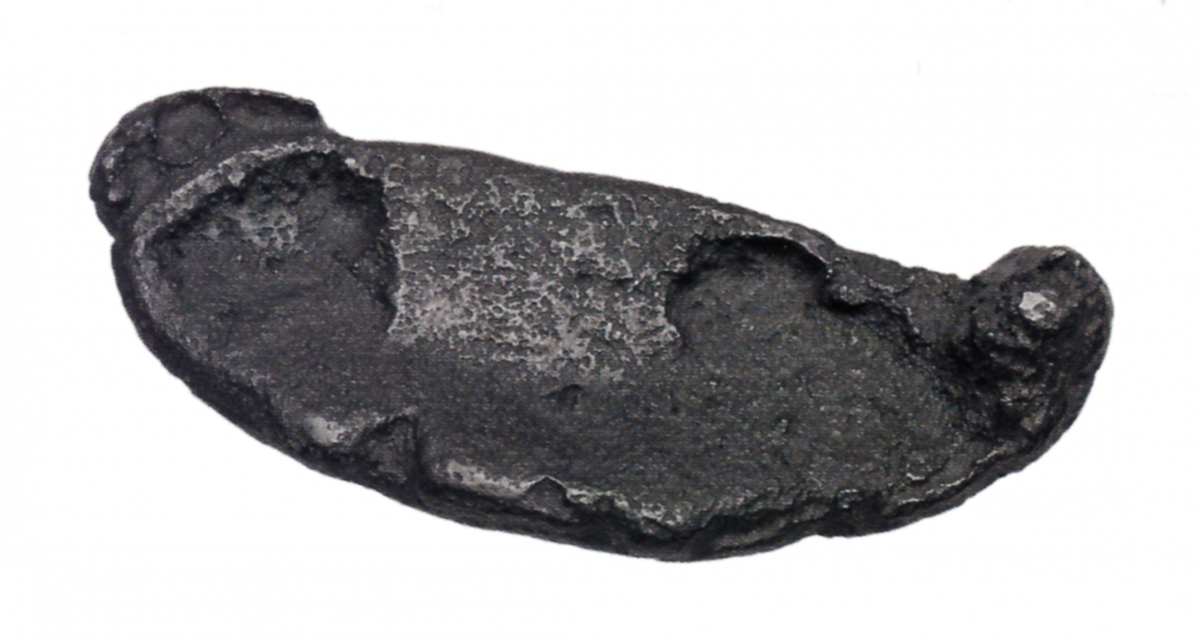 A Photograph of the lead; which weighed exactly seven ounces, five drachms, and eighteen grains. The piece of lead is now in the collection of the National Museum of Scotland.