Pedestals support the revolving optic.  Until just before the turn of the century the lot of the lighthouse designer was indeed a hard one: His only illuminant was a multi-wick oil lamp, which had a tremendously wide flame and was one of low brilliance.  In turn this forced the requirement for a large optic often weighting many tons and with but a roller bearing, meant, even with a very large weight driven clock, a slow speed of rotation for the optic.  This resulted in the design of Fresnel Lenses with a multi-sided optic using narrow panels giving a small stationary light intensity, which was, however, not greatly reduced as the lens rotated since the speed of rotation was small.

From the mariner's viewpoint he saw but few flashes per minute, which for sailing ships was satisfactory, but with their increased speed, steam ships had little time for evasive action and needed faster rotation speeds and more powerful light intensities. 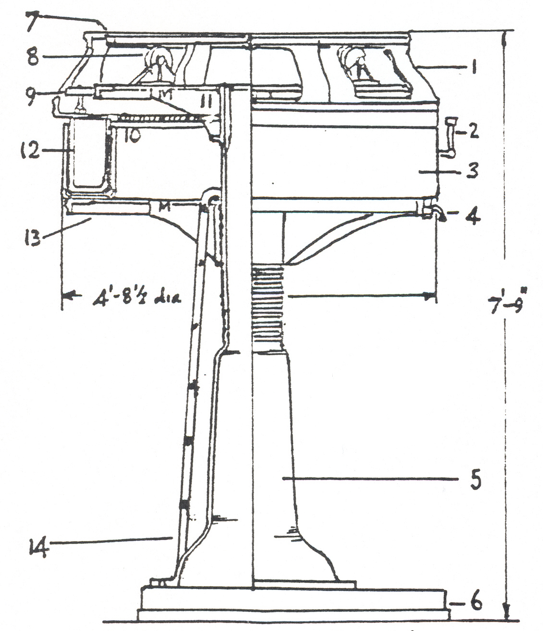 This is a 3rd Order Chance Brothers Mercury Pedestal

First the theory of mercury floatation. For a body floating on a liquid the friction at very low speeds is itself very low but builds up due to wave formation at higher speeds.  Since an optic does not exactly tear along we have in mercury, although very expensive, an almost frictionless medium.

How did it work? Now to Archimedes: “The weight of liquid displaced equals the weight of the floating object”.

Mercury weighs 49 pounds per cubic inch and the floating weight that can be supported can be up to 6.7 tons.

1 Carriage for the optic

6 (Banjo) Baseplate – to take the clock

7 Steel ring for the vertical rollers

13 Table for the trough, square threaded

The horizontal rollers (9) by lightly touching the trimming stage center the float in the trough.  The vertical rollers (8) have a dual purpose:  a) although the optic is carefully balanced the little residue will be taken up by a roller or two as the carriage revolves b) if the lighthouse is situated where the atmosphere is not all that clean it will be necessary, say, every fifth year to draw-off the mercury and filter it through a chamois cloth.  The opportunity is usually taken to examine the surfaces of the trough and float.  Cleaning and re-lacquering may be required.  Since the mercury is already drained away the optic, carriage and float are resting on the vertical rollers-their second purpose.  Gearing (10) with this is the race wheel pinion secured to the vertical output shaft of the clock.  The upper bearing for this shaft is usually attached to the trimming stage.

To clean and inspect the trough and float (which are inside the main columns) requires, with the jacks in position, removing the bridge brackets and the two winding shafts of the clock, which in turn is buried in the middle of 2 columns!  To adjust the speed of rotation, the control screw of the clock governor is near base plate level.  To get at it requires winding one-self, face down, through the columns and finally trying to hold a mirror (to see the screw) and a screwdriver in the left hand!

It will be obvious that for the smaller pedestals and optics, that access to burner or for cleaning the inside of the optic glass is impossible and an optic panel must be hinged to make a door that can be opened outwards.

1.  A demonstration given by a keeper to a posse of visitors.  A household pin is pressed against the carriage and, hey presto, a few tons of optic is rotated smoothly without bending the pin!

2.  How the Chance square threaded column came into being.  It seems that around 1900 he was called to Dublin to discuss a new light with the Chief Engineer of the Commissioners of Irish Lights.  The Chance Brothers engineer proposed a multi-column pedestal, but this design necessitates, when cleaning the float and trough, the use of three long screw jacks under the trough, and these have to be operated somewhat in unison by the three keepers.  The Chance engineer was startled when the Chief Engineer indignantly demanded where three keepers, all sober at one instant, might be found.  So the poor Chance engineer was told to go back to England and design a pedestal assuming one sober keeper only!  Hence the screwed center column, which while the table has three holes for tommy bars could at a pinch be lowered with the aid of one sober keeper with one tommy bar!  This type of pedestal subsequently became the standard for Chance lights.

3.  One of Chances erectors in the Bahamas had just poured in the mercury when the very small island he was on was hit hard by a hurricane.  The tower although of mass concrete shook so badly that he and the twenty or so islanders (with children, goats and fowl) were rained on by a mist of mercury jolted from the pedestal by the badly vibrating tower.  His description of how, later, his endeavoring to collect blobs of mercury from the several floors, was heart rending.  His bungalow, although anchored by heavy harnesses set in large concrete blocks, was blown out to sea together with all his tools, clothes, cooking and refrigerating equipment! 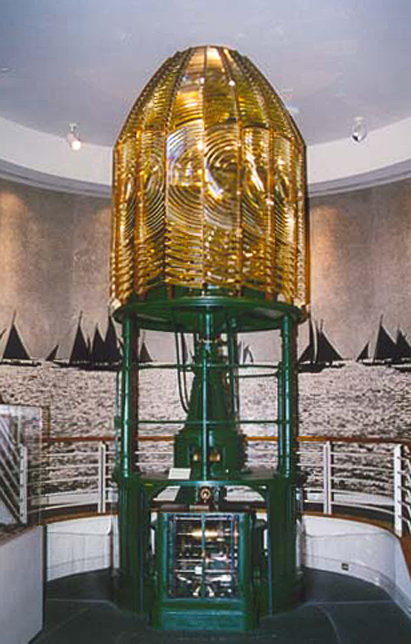 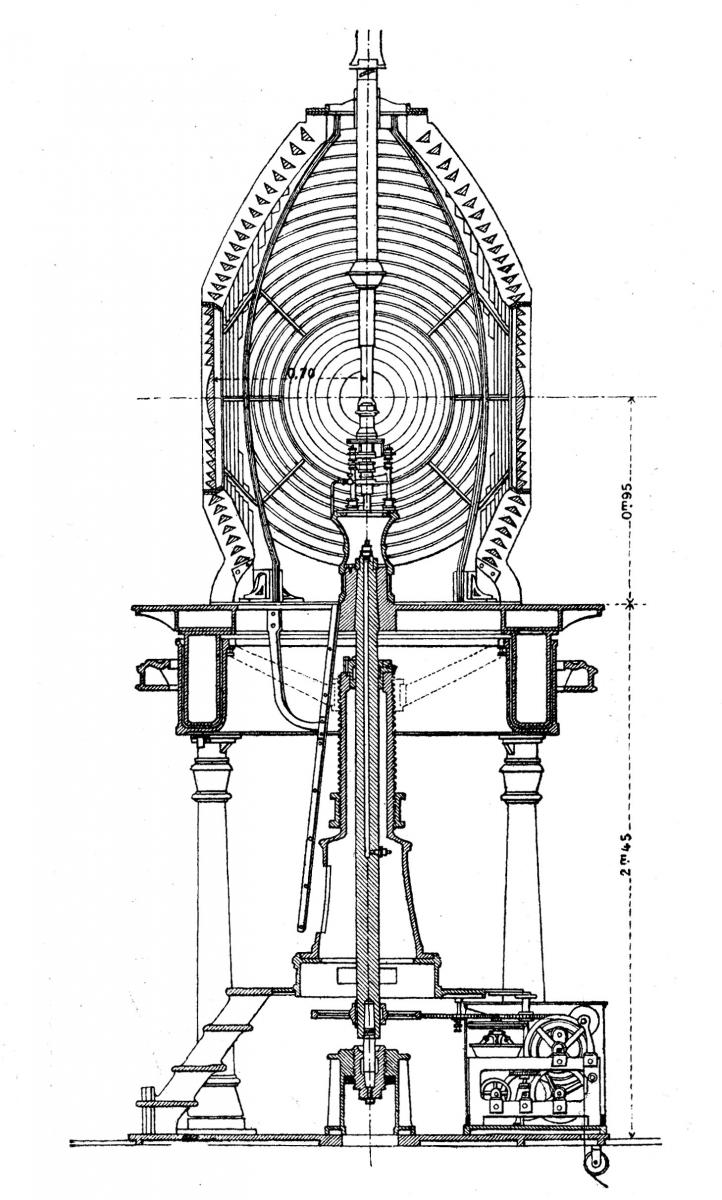 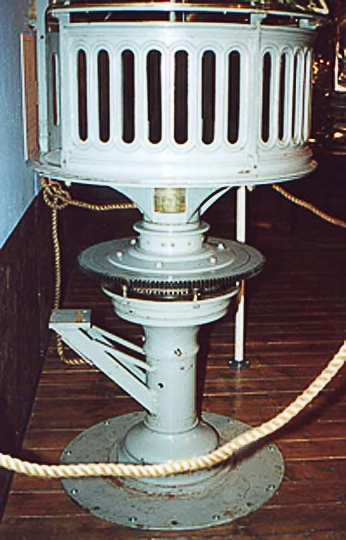 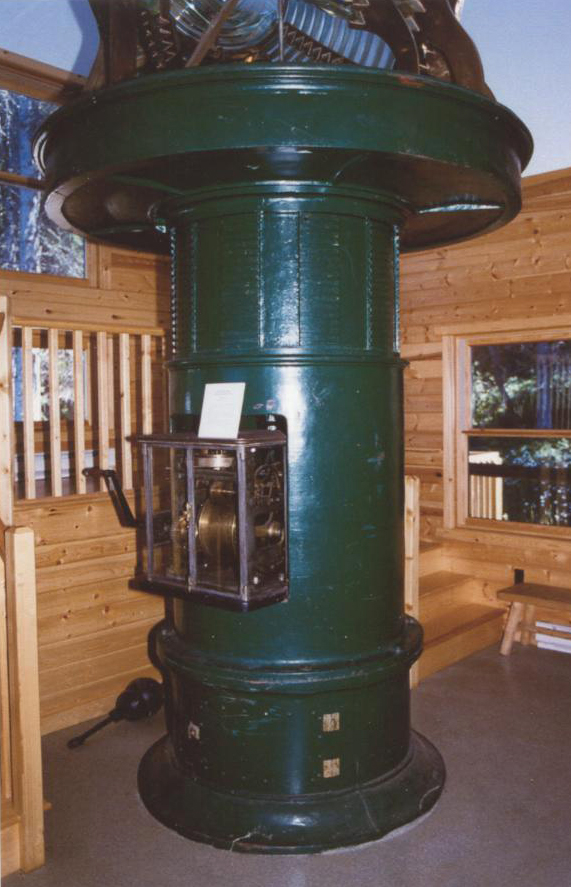