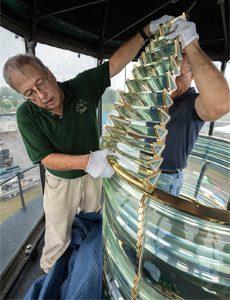 Mike Vogel was the organizer and founding president of the Buffalo Lighthouse Association, which began restoration of the city's historic 1833 lighthouse in 1985. He held that post for 22 years, leading an effort that included reinstallation of a Fresnel lens in the long-disused tower and its relighting for the opening of the U.S.-Canadian Friendship Festival in 1987; following his professional retirement in 2011 after a mandatory four-year leave from community volunteerism while he served as Editorial Page Editor for The Buffalo News, he was re-elected as president of the lighthouse association and still serves in that post.

A journalist, Mike also did extensive research on the lighthouse and Buffalo's harbor history, authoring or co-authoring five books on maritime and lighthouse history and publishing articles in regional and national magazines. His work at the local level soon led to efforts for the national lighthouse preservation movement and participation in National Maritime Alliance conferences. After launching and completing the first compilation of surviving American Fresnel lenses, an effort that later expanded into a complete national lighthouse lens inventory, he served on the National Lighthouse Museum steering committee and its site selection committee, becoming a founding trustee of the museum.

He was elected as the first First Vice President of the American Lighthouse Coordinating Committee, taking over day-to-day operation of the ALCC under Dick Moehl's leadership. Mike then was elected to the ALCC presidency and served two additional three-year terms, developing the committee's bylaws and establishing its position as the national lighthouse preservation movement's leadership council and forum. Several of the committee's pioneering position and research papers were completed on his watch, and the ALCC was instrumental in helping the government develop implementation guidelines for the National Historic Lighthouse Preservation Act of 2000. When the ALCC was reorganized as the American Lighthouse Council in 2014, he was elected again as co-chair with lighthouse researcher Candace Clifford.

As head of the ALCC and Buffalo Lighthouse Association, Mike partnered with the National Park Service to run the second national lighthouse lens conservation workshop in Buffalo in 2002. He also organized and ran the extensive lighthouse tracks at the national Maritime Heritage Conferences in Wilmington, NC in 2001, Norfolk, VA in 2004 and San Diego, CA in 2007.

*** Pictured above is Mike Vogel, left, installing a replica third order lens in the 1833 Buffalo Light with Dan Spinella.