At a distance, the early schooner type light vessels were easily confused with other sailing vessels, making it difficult to get reliable bearings. Visual aspects of the lightships – the relative merits of various colors for the hull, superstructure and spars; the color and characteristics of the lights; and the color and shape of the daymarks – evolved through trial and error, expedience and tradition. Even today little is known from a scientific standpoint about the actual visual effectiveness of such information and the Coast Guard has long been involved with research and development efforts in this area.

Hull Color – For early light vessels, there was no specified color, and little information exists on their actual color. In fact no systematic distinction among colors for buoys or any other aids to navigation was made until the 1850’s. Many of the early lightships were black and later, as will be seen, a variety of colors were used. In most cases these appear to have been selected to provide the best contrast against shoreline features, or contrast with merchant vessels. Disregarding a few lightships with multicolored checks and stripes; red, black, gray, and various shades of yellow were predominant in the 1800’s. Only one station vessel is known to have been green. Gradually red and black come to the fore during most of the 1900’s, providing the same lateral significance as buoys marking the port and starboard sides of channels. The Coast Guard adopted and implemented a standard color scheme for all lightships in 1940 – red hull with white lettering, white superstructure and buff color stack, mast, lantern galleries and ventilators. By 1941, all lightships in the U.S., except Ambrose and Lake Huron used this standard color scheme. Ambrose was changed from black to red in 1945 with Huron being the only holdout; retaining its black hull until the station was discontinued in 1970.

Hull Markings – This was generally the station name sometimes supplemented with the lightship’s hull number. These vessel numbers sometimes were placed on both bows, or aft at the quarters, or on the transom. Information in the Light Lists on the placement of these numbers was often at odds with photographs of the vessels. In some cases station names were quite lengthy, for example NANTUCKET NEW SOUTH SHOAL or CORNFIELD POINT LIGHT VESSEL. This, coupled with the numbers, resulted in rather small lettering. To improve the visibility of the lettering, a directive issued in 1913 specified that the names of all light vessels be simplified to one word painted in large letters. 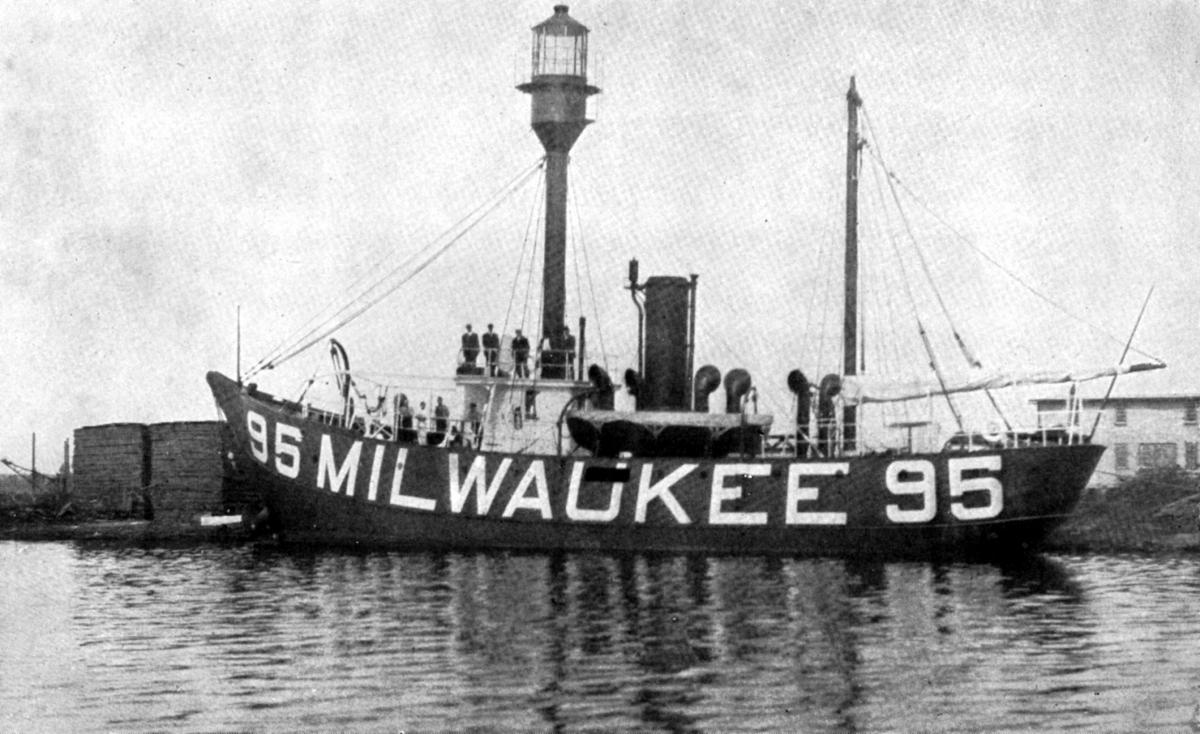 Markings of the Lightship Milwaukee

Daymarks – Daymarks were particularly important form early years until the 1920’s, permitting the lightship to stand out in a crowd, and to be set apart from other vessels or terrain features in the vicinity. Most of the lightship daymarks were ball shaped – large metal hoops, and circular or oval lattice structures to reduce wind resistance. These were mounted near one or both of the mastheads, and were painted a distinctive color. Occasionally the masthead daymarks were supplemented with an elliptical structure on the jackstay between the masts. When acetylene and electrical lens lanterns came into common use, daymarks as such were abandoned, with the circular lantern galleries providing the same visual recognition.

Light Characteristics – Early light vessels equipped with oil lamps showed fixed lights only – recognition being made by the number of lights shown, their relative height above water and their color. About 1864 lard oil was standardized to replace earlier animal and vegetable oils and was used until about 1877 when multiple kerosene lamps with parabolic reflectors came into general use. About 1910, lens lanterns having lamps using compressed petroleum gas and /or acetylene were introduced. Although a few of the early devices using oil lamps were used to produce a flash by rotation, flashing and occulting lights did not find widespread use on lightships until acetylene lamps were adopted. Acetylene lamps were equipped with a continuously burning pilot flame and a solenoid operated gas valve, which supplied the main burner. A clockwork and cam device located below-deck provided electrical impulses, which turned the masthead gas valve off and on to provide the desired duration and frequency of flashing or occultations. Acetylene lamps were widely used on lightships and saw service well into the 1930’s when electricity became the primary illuminate. 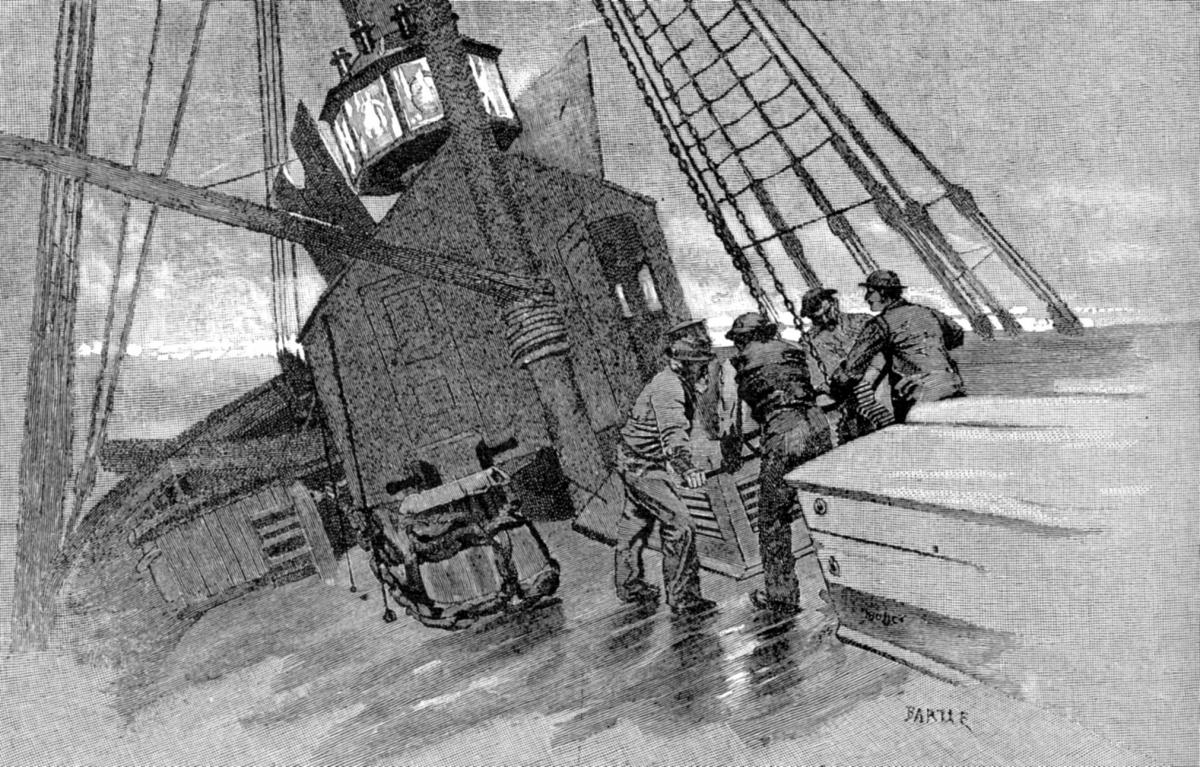 Hoisting a Lightship Lantern with Reflectors 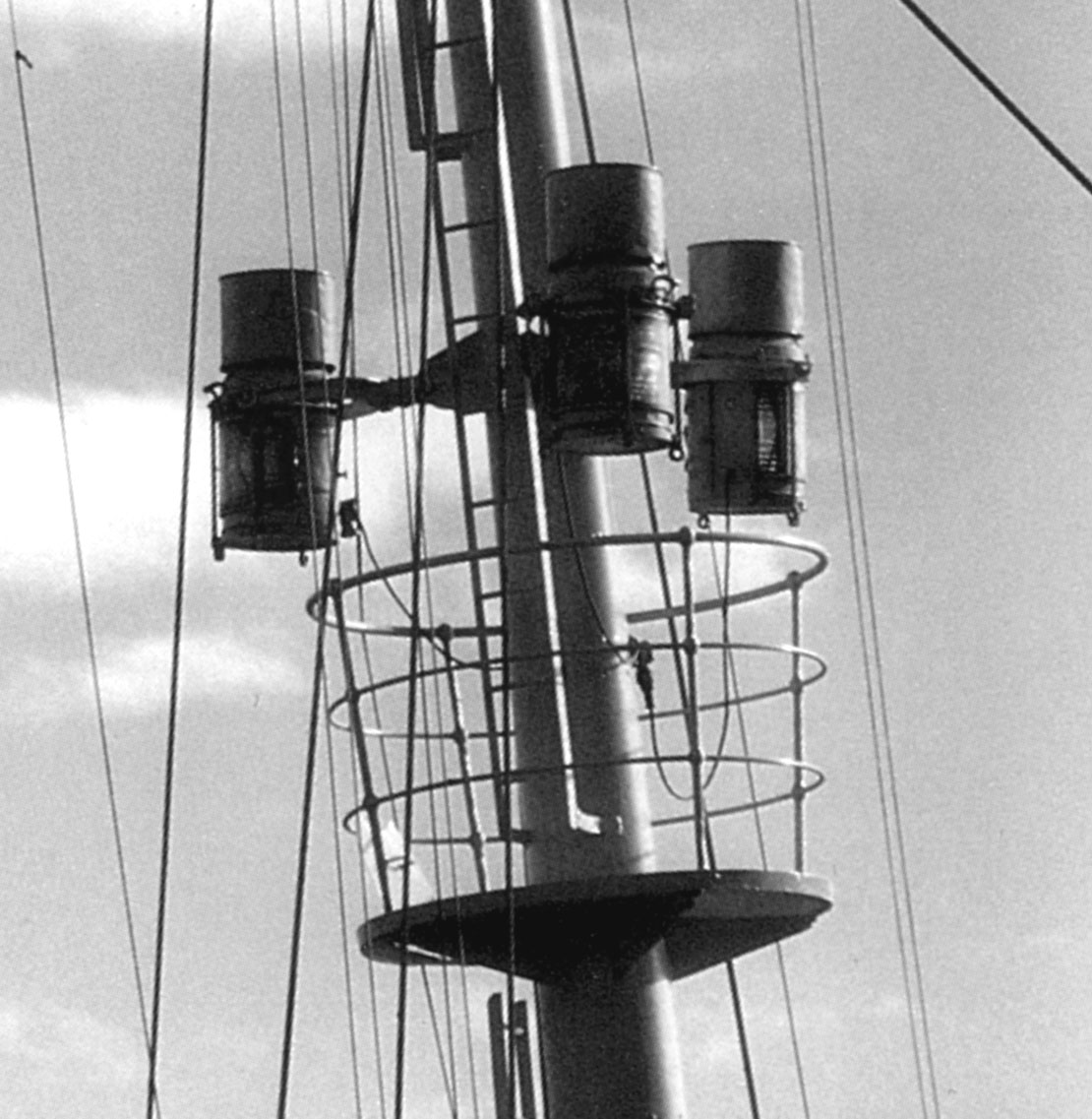 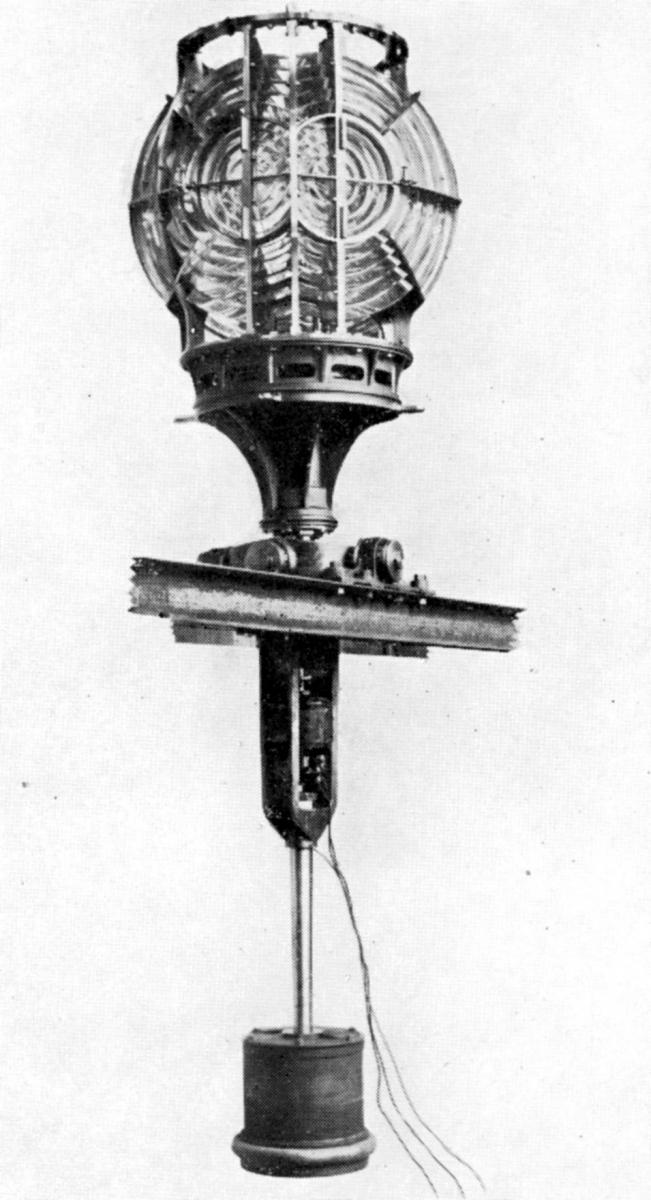 The range of visibility given in the earlier Light Lists appears to be more wishful thinking than fact. The listed 12-mile range of the Sandy Hook lightship in the 1850’s was reported by mariners to be about 4 miles under normal conditions. Many, if not most of the lights designated, as Occulting up through the 1930’s were actually what was later termed Equal Interval, a perfectly understandable term now changed to Isophase by some jargon mechanic.

Fog Signals – The earliest lightships to have any fog signal equipment were provided with large bells, struck by hand. For a short period in the 1850’s the bells were supplemented with guns. The obvious hazards of fire, from storing and handling explosive materials, brought a rapid end to these small cannon. Following this period, in 1859 there was a period where “bell and horn” signals were used. The Lighthouse Board directed that all lightships provide signals in thick weather by alternately striking the bell, followed by rapid horn blasts – the sequence to be repeated at five-minute intervals. The horn in this case was similar to the mechanically operated diaphragm horns on fishing vessels. Later, this double-barreled approach was taken over by “bell or horn” which signified an either/or capability. Twelve and six inch chime and bell whistles powered by steam came into widespread use in the 1890’s and for many years were the most common fog signal used on lightships. Whistles, diaphragm horns of various types, sirens, and diaphones; all powered by steam or compressed air found widespread use in the 1900’s. Steam powered fog signals, although effective and distinctive, represented an enormous fuel requirement, particularly for the coal fired lightships. This placed a burdensome and expensive resupply requirement on the tenders. Steam ultimately gave way to compressed air, although limited use was made of electrically operated diaphragm horns and sirens.

Several different types of diaphragm horns were used on lightships, but by far the most common was the 17 inch Leslie Typhon. A few duplex or triplex horns were used to produce a chime signals. 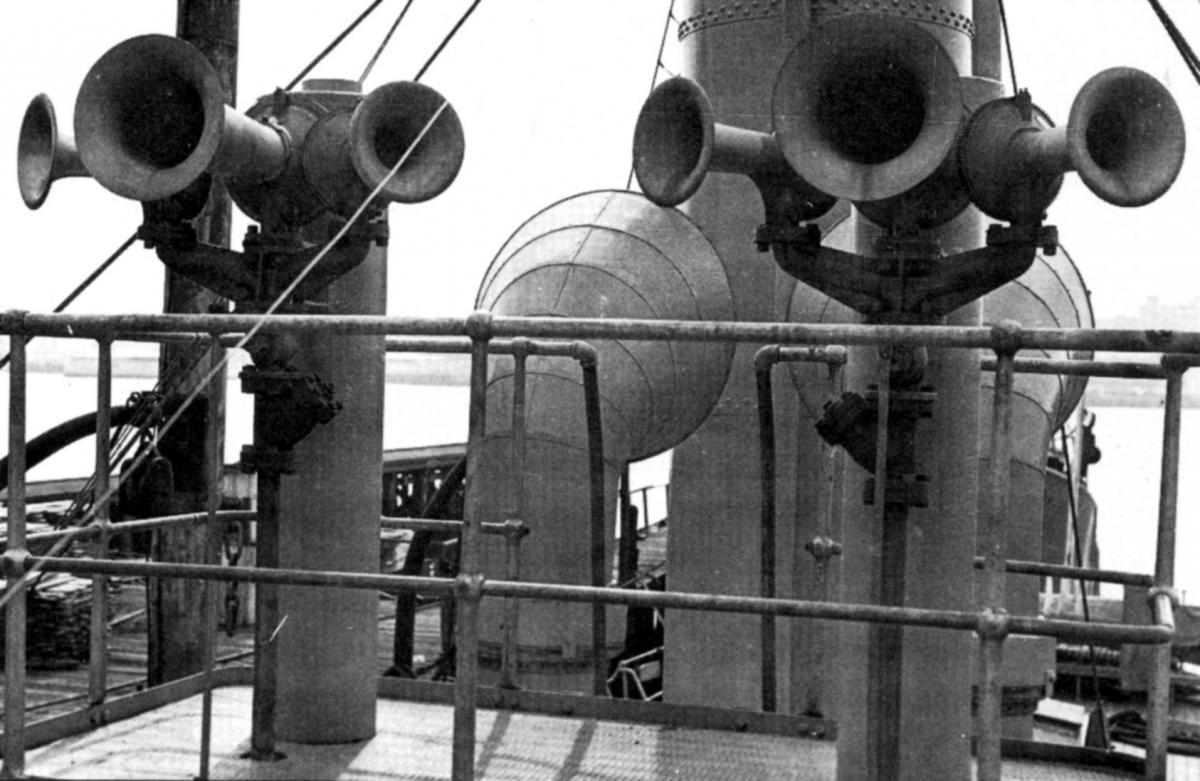 Two types of diaphones were used on lightships. The first produced a single low-pitched tone, which ended in a characteristic grunt. The second, and probably most familiar, sounded two separate notes of different pitch; the first blast of higher pitch immediately followed by a lower pitch blast, each of about one second duration. For persons who have never experienced either of these fog signals, it is difficult to grasp the magnitude of the shock wave and vibration effects produced by the shattering roar of these signals at close range.

Submarine Signals – Submarine bells first appeared on lightships in 1906 and continued in service until 1940. The device consisted of a very thick bell shaped casting with an internal striker operated mechanically or by compressed gas. This rig was suspended over the side below the ship. A distinctive code was assigned to each station; often the number of the station vessel, and this code was repeated continuously. For example the code (5-4) would consist of 5 strokes about one second apart, a pause, then 4 strokes. After a longer pause, the sequence was repeated. Any other vessel equipped with suitable receiving gear consisting of sensors installed forward on both sides of the hull underbody could, with headphones, detect the bell signals (more like clanks or clunks), and get a rough approximation of the lightships relative bearing for homing purposes. These underwater signals were readily detectable at ten miles or more, and distances of up to 22 miles have been reported.

Radiobeacons – Radiobeacon equipment as such came into operational use in this country when the Ambrose lightship station was equipped with the capability in 1921. The first radiobeacons were called radio fog signals, being activated only during periods of reduced visibility. Early radiobeacons operated only at specified, scheduled times which were given in the Light Lists. Later, with the advent of vacuum tube transmitters in the mid 1920’s, the beacons operated continuously or were sequenced with a group of other stations to provide bearing and position fixing capability on a 24-hour basis. Early in the scheme of things, radiobeacon transmissions were synchronized with the lightship’s fog signal to provide means for determining both distance and bearing. By the early 1930’s practically all lightship stations could serve as distance finding stations.

Visual and Radio Call Signs – Visual call signs using the International Code of Signals were assigned to lightship stations in 1912, except for the Great Lakes stations which did not display visual identification symbols until the Coast Guard era. The signals consisted of a three or four letter flag hoist required to be displayed to all approaching vessels, or upon request. Initially the visual call differed from the radio call, but in later years both calls were made identical.

Radio equipment on lightships was initially supplied, installed and operated by Navy personnel until responsibility was taken over by the Lighthouse Service in the 1920’s. Although experiments with radio aboard lightships had been conducted earlier, the first radio installation placed in operational service occurred in 1904 at the Nantucket Shoals station.

During 1918–1919, radio capability was added to practically all lightship stations, but only the most important seacoast stations maintained a continuous radio watch for accepting messages other than distress calls from passing vessels.