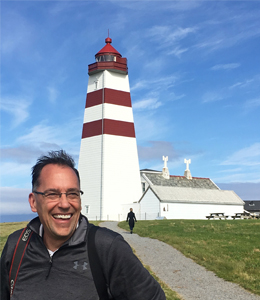 Kraig grew up in the landlocked state of Utah and didn’t move to a state with lighthouses until he attended graduate school at the University of California Santa Barbara. After earning his PhD in 1995, he worked for a few years at a high-tech company in the Bay Area, and it was while on an extended assignment from this job to the Raleigh/Durham area that he became interested in lighthouses following a day trip to Cape Hatteras and Bodie Island on the Outer Banks.

After returning to California, Kraig planned a few trips with friends to explore lighthouses on the West Coast, and in 2001, he launched lighthousefriends.com to chronicle these journeys and help others discover lighthouses. Over the next decade or so, he managed to visit every lighthouse in the United States and a good portion of those in Canada. Using historic records and photographs gathered in his travels, Kraig compiled a history of each lighthouse in the United States and Canada to complement his photography.

Kraig co-authored a book on the lighthouses of New Brunswick in 2012, and in 2016, he received the “Modern Day Light Keeper Award” from the National Lighthouse Museum. During 2018 and 2019, Kraig compiled an inventory of keepers and other lighthouse personnel for the U.S. Lighthouse Society’s research catalog that includes over 17,000 individuals.

Developing the website, and photographing and researching lighthouses has been a great way to combine his skills as an electrical engineer with his passion for photography and history.