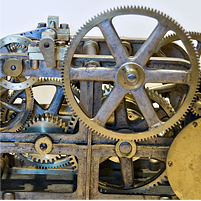 Weights and measurements for clockwork mechanisms

This table is a compilation of information culled from the Inspection Reports contained within the National Archives Database. It is intended to accompany the article “Weights and Weightways at American Lighthouses” by John T. Graham which appears in volume 32, number 1 of The Keeper’s Log. The reports included the following categories of information: Lighthouse name; Date of report; Order of the lens; Pounds of weight in use; Lens rotation time; Length of Drop Tube (if any); Time between windings; and whether the lens turned on ball bearings, chariot wheels, or a mercury float system.

Pedestals support the revolving optic.  Until just before the turn of the century the lot of the lighthouse designer was indeed a hard one: His only illuminant was a multi-wick oil lamp, which had a tremendously wide flame and was one of low brilliance.  In turn this forced the requirement for a large optic often weighting many tons and with but a roller bearing, meant, even with a very large weight driven clock, a slow speed of rotation for the optic.  This resulted in the design of Fresnel Lenses with a multi-sided optic using narrow panels giving a small stationary light intensity, which

The first rotation clockworks were developed to rotate chandeliers that supported the reflectors used for illumination in early lighthouses.  In America, starting in 1812, Winslow Lewis contracted with Simon Willard, a famous Boston clock maker, to build all of the rotation machinery he used for his rotating lights. Simon Willard built a total of about 40 clockworks for Winslow Lewis’ revolving lights.  He continued to make the clockworks until 1839 when he retired.  In the period from 1839 through 1850, Benjamin F. Willard, Simon’s son, continued to provide and repair the clockworks. The early clockwork was described as follows:  “The lighting apparatus consists of ten lamps, with the same number of parabolic reflectors and plano-convex lenses, supported upon two copper tables, which have the machinery for producing their revolutions attached.  The lamps are divided into two clusters, and are so arranged upon the tables that each cluster of five lamps will display its light for a certain period during each revolution.”

There are three major types of lenses used in lighthouse towers – fixed, flashing, and a combination of fixed and flashing.  Flashing lights are the most effective and powerful.  The first lens created by Augustin Fresnel was a flashing lens.  The flashing lens rotates and has a number of bull’s-eye lens panels that create beams of concentrated light (an eight-panel lens produces eight beams).  As the lens rotates, the beams successively pass the view of the mariner giving what appears as a flash of light followed by darkness.  Beneath the flashing Fresnel lens are several unusual mechanisms used to rotate and control the lens.  The lens will be found to be supported on wheels, ball bearings, or on mercury contained in a large metal tub.