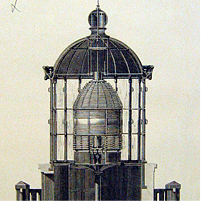 The first National Lighthouse Lens Survey was released in 2001 at the Sixth Maritime Heritage Conference in Wilmington, N.C. It listed more than 400 classical Fresnel lighthouse lenses in the United States, and two pre-Fresnel, Winslow Lewis lenses. The inventory was a compilation of databases researched by Mike Vogel of the Buffalo Lighthouse Association and the American Lighthouse Coordinating Committee, and by Al and Helen Gademsky of Ohio.

The English and Scottish lighthouse authorities wanted to produce all Fresnel lenses and other lighthouse equipment in their own country and persuaded the Cookson Glass Company to begin production of Fresnel lenses in 1834. Cookson brought in Leonor Fresnel, Augustin’s brother, as a consultant and produced Fresnel lenses from individual pieces and prisms as done by the French lens companies.  The first of these better designed Fresnel lenses, built by the Cookson Co., was installed in Scotland in 1835, in the Inchkeith lighthouse.

Many companies were involved in the development and refinement of the Fresnel lens.  Some supplied only the glass for the lenses, either in rough form, or both cast and polished.  Other companies assembled the glass elements and performed finish work on the lens elements.  Still other companies produced both the glass and the finished lenses.  This story will be divided into several parts, each discussing one or more of these companies and their contribution to the development of the Fresnel lens.

The German government etched symbols onto the prisms of their Fresnel Lenses. This is the story of those symbols. The German government marked most of their lenses with a government certification symbol. Before 1933 and the Nazi Reich, the symbols used were the German Imperial Eagle and a symbol that looked like a castle, which represented the German Seamarks Service. These marks were etched onto the lens glass to certify that the lens met the requirements for government usage.

Fresnel lenses represent a unique aspect of U.S. Coast Guard history.  These artifacts are highly sought by a wide variety of museums and associations.  Due to their historic significance, fragility, high value and the U.S. Coast Guard’s policy to protect and preserve these artifacts, an additional set of conditions is placed upon prospective borrowing organizations.  Requirements for the care, security and display of Fresnel lenses are as follows:

Lens Use Prior to Fresnel by Thomas Tag

Most lighthouse enthusiasts think that the Fresnel lens was the first lens used in lighthouses.  However, that assumption is incorrect in that a number of lenses were proposed and put into use in the years before Augustin Fresnel designed his famous lens.  This story will give you information about these early attempts to use lenses to augment the power of lighthouse optics.

Some years ago Chad Kaiser of the US Lighthouse Society ran across a photograph of what was supposed to be the most powerful lighthouse in the world at 1 billion candlepower.  Yes, that is billion not million.  I became intrigued and started researching this light and its history.  This story will describe this very unusual lighthouse in France and how it came to be.  It is actually not a true lighthouse at all.  Instead it is an example of one of the earliest and most powerful Airway Beacons ever built.  But, first we need to understand a little more about air travel in those days.

The Fresnel Lens by Thomas Tag

The French Commission for Lighthouses was established on April 29, 1811.  In 1819, Arago who had become a member of the French Commission for Lighthouses in 1813, offered to make a systematic review of possible improvements in lighthouse illumination.  He requested that Claude Mathieu and Augustin Fresnel be assigned as his coworkers on the project.  His request was granted on June 21, 1819, and Augustin agreed to serve on the committee. Augustin produced his first report on optics and lamps for lighthouses on August 29, 1819, just two months after starting to work on the project.

Below is a chart identifying the Fresnel Orders with their accompanying measurements, weights, number built, and costs

Chronology of the Development of the Fresnel Lens

Below is a listing of the major changes in the Fresnel lens through time and in most cases who the creator of each change was.