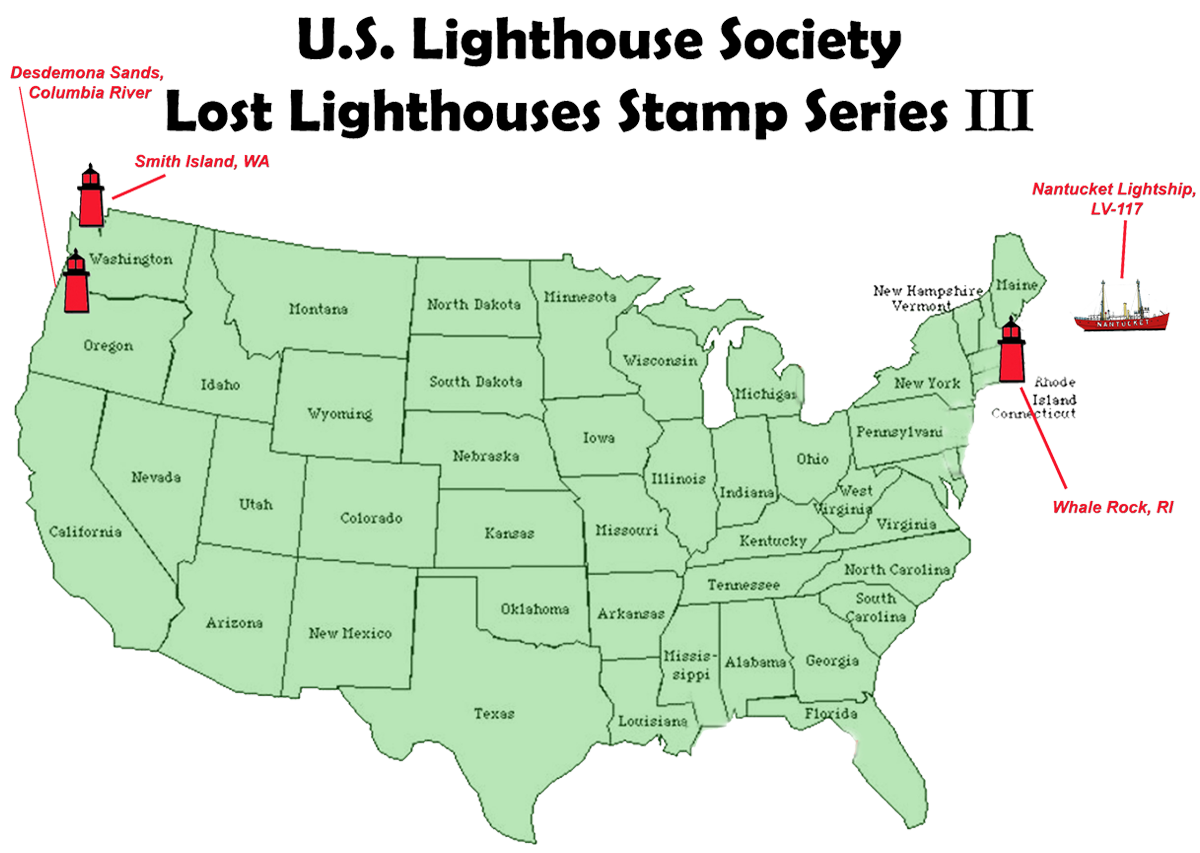 The USLHS Passport Program continues to celebrate visiting lighthouses and their ongoing preservation with Series III featuring our 3rd set of Lost Lighthouses. There are so many of these lost lighthouses that were so very important to our maritime history, we felt a third series was necessary.

Over the years, the treacherous entrance to the Columbia River has been marked by a number of lighthouses and a lightship:  Cape Disappointment (1856) and North Head (1898) to the north and Point Adams (1871) and Desdemona Sands (1902) to the south.  In addition, between 1892 and 1979, four different lightships were stationed off shore to guide vessels across the Columbia River Bar, an area known as the Graveyard of the Pacific.
A full description for this lighthouse is included with your stamps...

Nantucket Shoals is an area of dangerously shallow water extending southeast from Nantucket Island, Massachusetts.  The shoals are just off a major transatlantic shipping lane and in some locations the water can be as shallow as 3 feet.  Lightships stationed there were the last light seen by vessels leaving the U.S. and the first one seen when approaching.  Between 1854 and 1983 a number of different vessels marked the edge of these dangerous shoals including the Nantucket LV-117, which began its duty there in 1930.
A full description for this lighthouse is included with your stamps...

Smith (aka Blunt) Island Lighthouse marked a small island at the eastern end of Washington’s Strait of Juan De Fuca, six miles off shore from Whidbey Island.  It was among the first five lights in Washington state along with Cape Disappointment (1856), New Dungeness (1857), Cape Flattery (1857) and Willapa Bay (1858).  Built in 1858, using the same design as many New England lights, Smith Island had a 1 ½ story keeper’s house with the lantern room centered on the roof.  Other buildings at the station included twin Cape Cod residences, a watch shack, a third residence and boat house.  When originally constructed, the lighthouse stood about 200 feet away from a sixty foot bluff on the island's western edge.
A full description for this lighthouse is included with your stamps...

Whale Rock is a small island at the entrance to the West Passage of Narragansett Bay.  In 1867 it was the site of a deadly schooner crash that killed five men, but it wasn’t until 1882 that a lighthouse was constructed to guide mariners past the island.  A cast-iron caisson was set atop the rock and filled with concrete.  The four story lighthouse was built on top of this cylinder with three of the levels serving as living quarters for the keepers.  It was not considered to be a desirable assignment because of the cramped living conditions and exposure to every storm that struck the area.  In fact, 16 different head keepers served at the station during its first 27 years.
A full description for this lighthouse is included with your stamps...