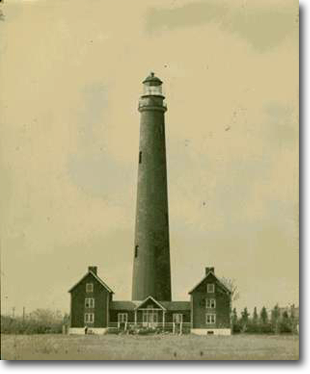 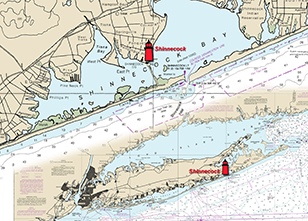 Shinnecock Bay Lighthouse was first activated on January 1, 1858, showing a fixed white light produced by a first-order Sautter Fresnel lens. Although Shinnecock Lighthouse initially confused mariners, it helped fill the sixty-seven-mile dark void that had previously existed between the lighthouses at Fire Island and Montauk Point. Shortly after its formation, the Lighthouse Board sent a letter to captains of vessels traveling between the United States and Europe seeking their input on the quality of U.S. lights versus those of other countries and to learn where new lights might be needed.

In response to this query, C.R. Mumford, commander of the packet-ship Wisconsin, wrote the following in September 1851: “Within the last few years a great number of vessels have been stranded between Montauk Point light and Fire island light, on Long Island ; and in many instances there has been a great loss of life, as many of them were vessels loaded with emigrants; and I would most respectfully suggest that a powerful flashing light be placed on some elevated position about halfway between Montauk and Fire island lights. This last light is but a very indifferent one, and at a distance of ten miles, shows about as large as a star of the fourth or fifth magnitude.”

In 1931, an electric light, which produced a group of two red flashes every fifteen seconds, was installed atop a red skeleton tower on the beach near Shinnecock Inlet, and Shinnecock Lighthouse was discontinued. George J. Thomas, the last head keeper of the lighthouse was transferred to Sea Girt Lighthouse in New Jersey.

The Great Hurricane of 1938 destroyed the metal tower, but the old brick lighthouse stood resolute. A similar skeletal tower was erected in 1939, and a light atop a metal tower continues to mark this area of the coast today. The federal government offered to lease the abandoned lighthouse to the Town of Southampton in 1934, but the Town Board rejected the proposal.

Shortly after assuming control of the nation’s lighthouses in 1939, the Coast Guard felt Shinnecock Lighthouse was unstable and should be torn town. Local residents wanted the tower preserved and had the lighthouse examined by engineers, who found it to be “safe and stable,” but the Coast Guard still pursued its demolition plans, and in December 1948 the bottom portion of the brick walls on one side of the tower was chiseled away and replaced with supporting timbers. The timbers were then doused with gasoline and set on fire by eighty-eight-year-old Ellsworth Howland. As the wood was consumed, the tower slowly leaned over and then crashed to the ground.

A local newspaper carried the following on the destruction of the lighthouse on December 23, 1948. “There were tears in the eyes of many old timers who stood watching the old landmark pass away, powerless to save the old building. We did our best to save it, but in vain. Thus passes a landmark that will be missed by thousands ashore and by those who still used the old Ponquogue Lighthouse as a guide to bring them safely to land from the sea.”