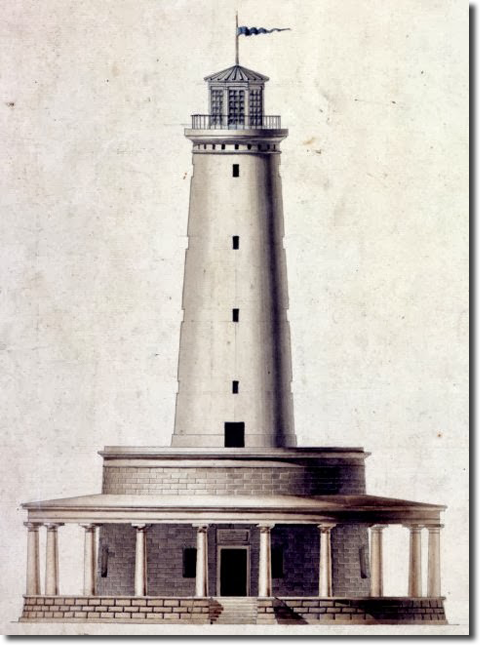 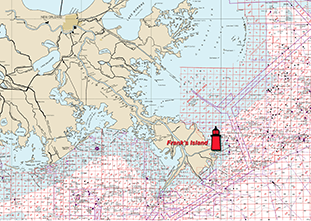 In 1804, President Thomas Jefferson, having recently purchased the Louisiana Territory, envisioned a grand monument to serve as a navigational beacon to mark the entrance of the mighty Mississippi River. Benjamin Henry Latrobe, the renowned architect and engineer, was selected to design such a lighthouse. On paper, Latrobe’s “Lighthouse at the Mouth of the Mississippi River” was magnificent! The building materials consisted of brick, marble, and other stone; but the foundation of this heavy structure would have to be laid upon the soft clay that lines the entrances of the Mississippi River.

The site chosen for the lighthouse was a small island located north of the Northeast Pass of the Mississippi River called Frank’s Island. Although engineers determined the soil of the island to be adequate for the structure, no contractor at the time was willing to undertake such a foreboding task. After some prodding, the designer of American lighthouse reflector systems of the day, Winslow Lewis, finally accepted the challenge; but only under certain contractual terms – Congress agreed that he would be paid in full should the structure’s foundation fail. Finally, in 1818, construction on the lighthouse began.

In March of 1820, just days before the lighthouse was to be completed, the foundation settled and cracks began to form throughout the structure. The internal arches could no longer support the massive weight of the stone parapet. The columns fell to the ground and the walls of the Keepers Quarters collapsed. Without any support at its base, the lighthouse tower began to list. Deemed too costly to repair, the lackluster remains of what was to have been a magnificent structure were abandoned.

After spending over $85,500, a tidy sum in those days, and with no lighthouse to mark the entrance of the Mississippi River, Congress once again turned to Winslow Lewis, who made an offer they could not refuse. For just under $10,000, Lewis offered to build a second lighthouse on Frank’s Island and guarantee its foundation. On March 20, 1823, the lantern was lighted for the first time at the Northeast Pass Lighthouse. Lewis’ lighthouse served as a working navigational beacon until 1856. Over time, the lantern gallery was destroyed and the tower was in disrepair. By the 1950’s Frank’s Island itself eroded away and the lantern-less tower stood alone in the waters of Blind Bay. In 2002, encroached by the powers of a hurricane, the ruins of the second lighthouse fell over into the water. Unless the tides are extremely low, no sign of either lighthouse erected on Frank’s Island remains today…