Spot was a springer spaniel who belonged to a girl named Pauline, the daughter of the keeper at Owl’s Head Light in Maine. This little dog loved everything about the lighthouse including the fog bell, and the ships that passed by in the bay. Whenever a boat reached a spot near the cliff, he had a habit of running over to the rope attached to the fog bell and tugging on it vigorously with his teeth a few times until it rang out over the water. When the boat answered with a whistle, he happily dashed down to the shoreline and barked. 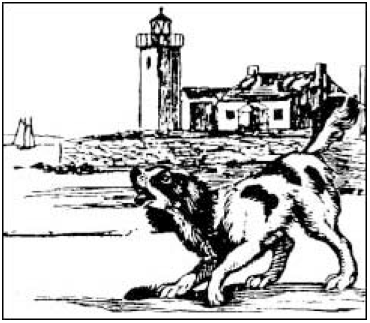 One very stormy snowy night, the lighthouse keeper received a telephone call from the wife of the mailboat captain who was very worried because her husband was already several hours late. She knew about Spot and wondered if he might be able to hear the mail boat’s whistle. So the keeper let Spot out but he returned in a little while and scratched to be let in. Just as he was about to go to sleep, snuggled up in a cozy corner, he raised up on his haunches, lifted his ears, and tensed his body. He had heard the mailboat’s whistle!

The keeper let him out again and off he scampered through snowdrifts to try to reach the bell, but the snow had piled up too high. So he took off to a point high on the cliff, which was nearest to the boat and barked away. The keeper had followed the dog and it was then that he heard the mailboat’s whistle and realized if the captain could hear the dog’s barking it would tell him where he was in spite of the storm. Spot kept barking furiously and soon three blasts from the mailboat’s whistle were heard in answer. They had heard Spot’s barking and now they could chart their course home. Spot had saved the boat from disaster!

THE STORY OF THE FLYING SANTA

Many years ago when lighthouse keepers and their families often had little communication with the outside world (1929) a man named Bill Wincapaw was ﬂying in his small single engine supply plane out of Rockland, Maine. An unexpected snowstorm arose and he lost his bearings. If he hadn’t seen the beams from the lighthouses, which guided him back to Rockland, he probably would have perished because he arrived there just as he was running out of fuel.

He was so thankful for the faithfulness of the lighthouse keepers who manned the lights, which guided him to safety that he decided to put together small Christmas packages for the keepers and their families. Each year he delivered them by plane dropping them at all the lighthouses in the area near his home. Thus began the tradition of the “Flying Santa.”

Since most of these light stations were located in lonesome places they really looked forward to this touch with the outside world. A few years after he started this Christmas tradition he was replaced by Edward Rowe Snow, a lighthouse author, who continued the ﬂights himself until his death in 1982. At that point the Hull Lifesaving Museum took over the custom.

Mr. Snow wrote in one of his books of missing the tower at Whaleback Light and realizing that the bundle would be lost in the sea. So he circled back and dropped another package. About three weeks later, ninety miles across the bay, the package was found.

THE ARMY OF TWO

Two young daughters of the lighthouse keeper at Scituate, Massachusetts performed a remarkable feat during the War of 1812. Rebecca and Abigail Bates were alone at the lighthouse one day in September of 1814 when they saw the large British man-of-war LA HOGUE approach and anchor nearby. They sent their younger brother to town to warn the people of a possible attack. Five longboats from the ship started rowing toward shore. 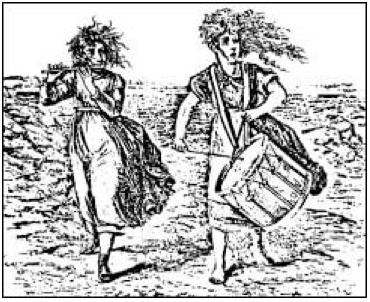 The Army of Two

At this point Rebecca grabbed a drum and handed her sister a ﬁfe. She started beating the drum while Abigail played the ﬁfe, using familiar military tunes of the day. As the oarsmen neared the lighthouse, they played louder and louder until the British stopped rowing. They began to wonder if American troops were mustering to ﬁght them.

The commander of the warship heard the music and ordered a gun ﬁred signaling the landing party to return. As they hastily left the harbor they ﬁred a parting shot at the lighthouse, which missed its mark. Rebecca and Abigail collapsed on the beach in exhaustion but their “phantom army” had saved the town great loss of life and property.

Next we have a secret message, a maze, and a word puzzle square - Can you find the answers? 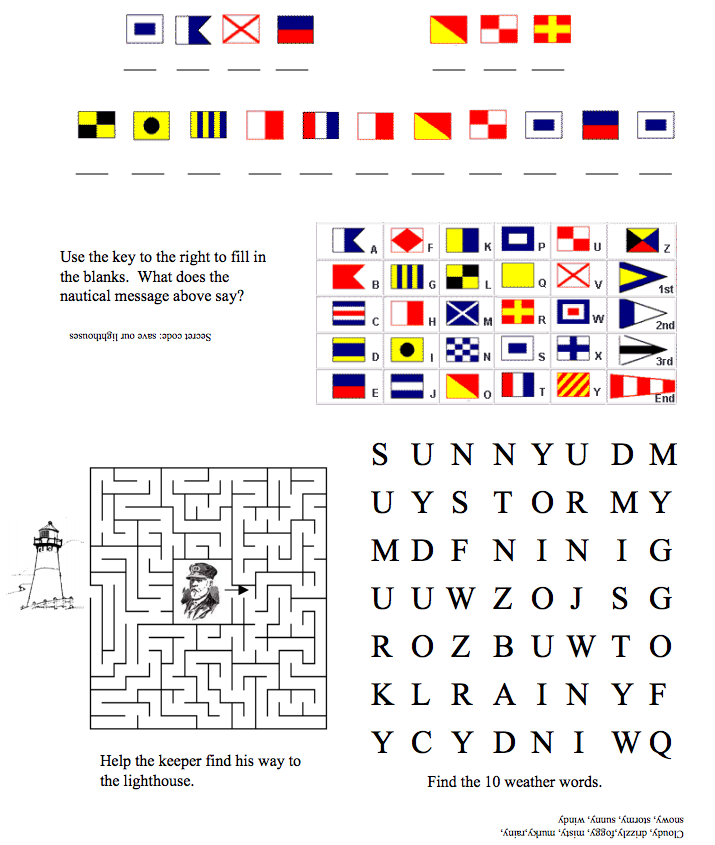 Now for a few more puzzles. 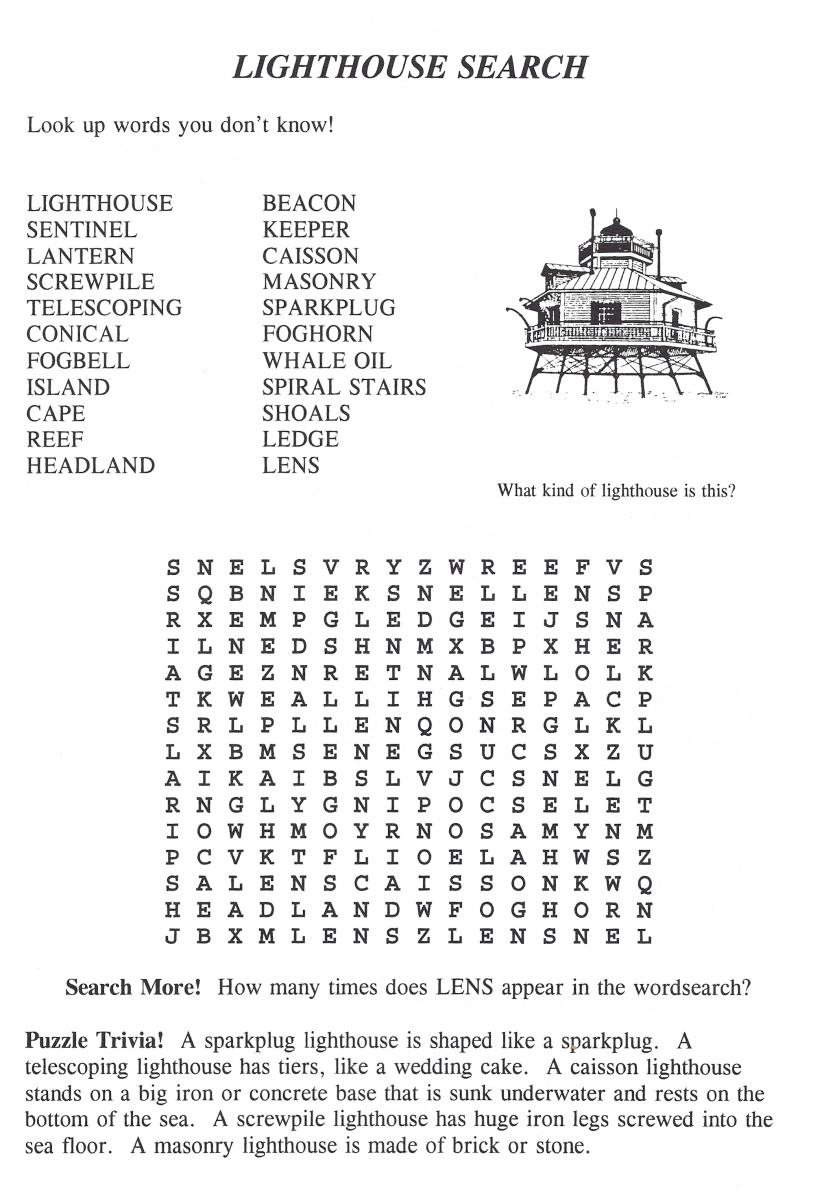 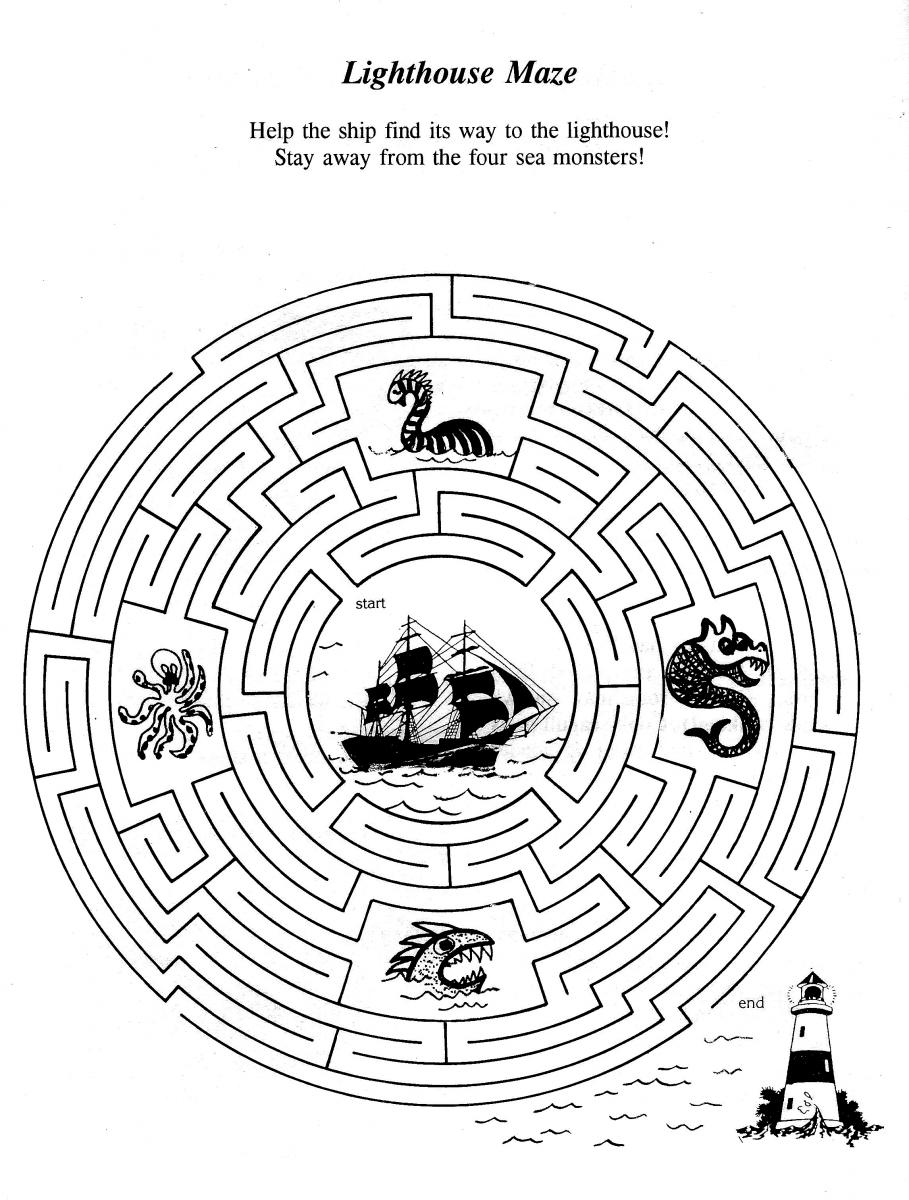 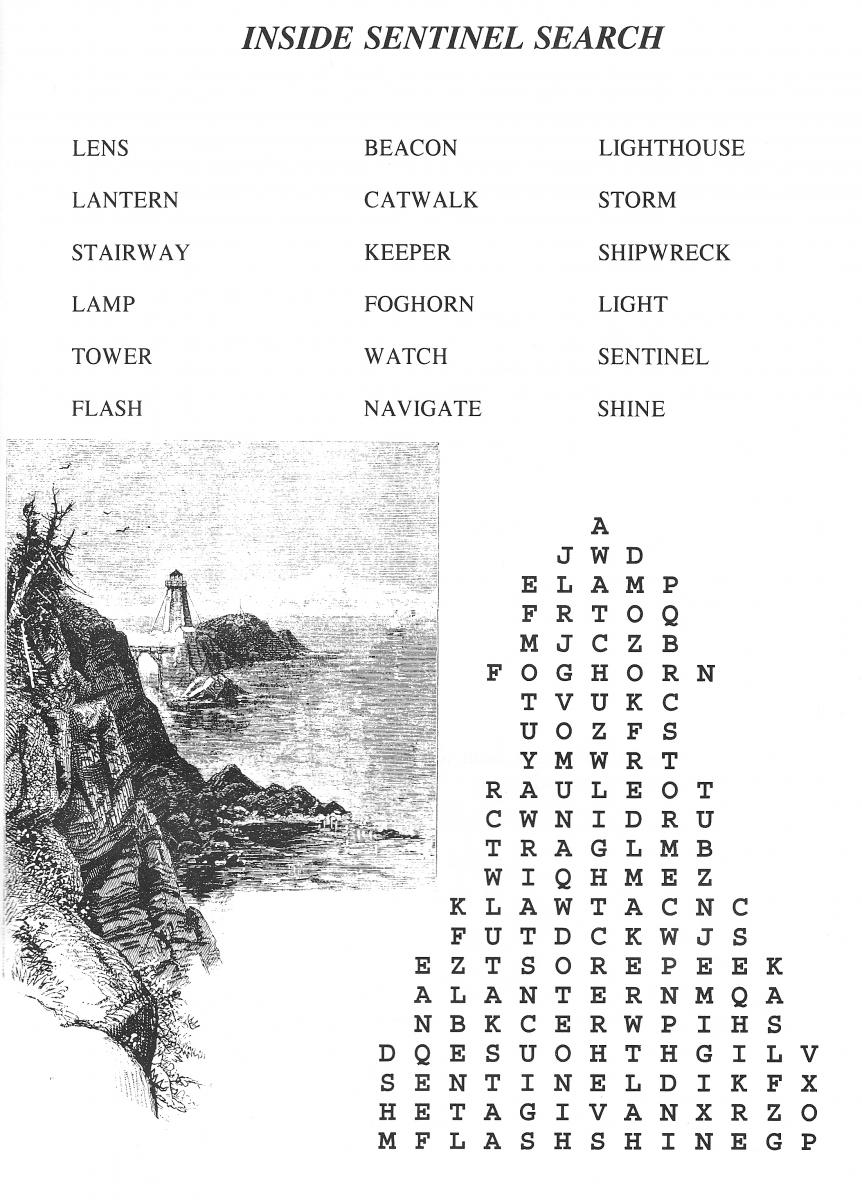 Let's try some other projects! 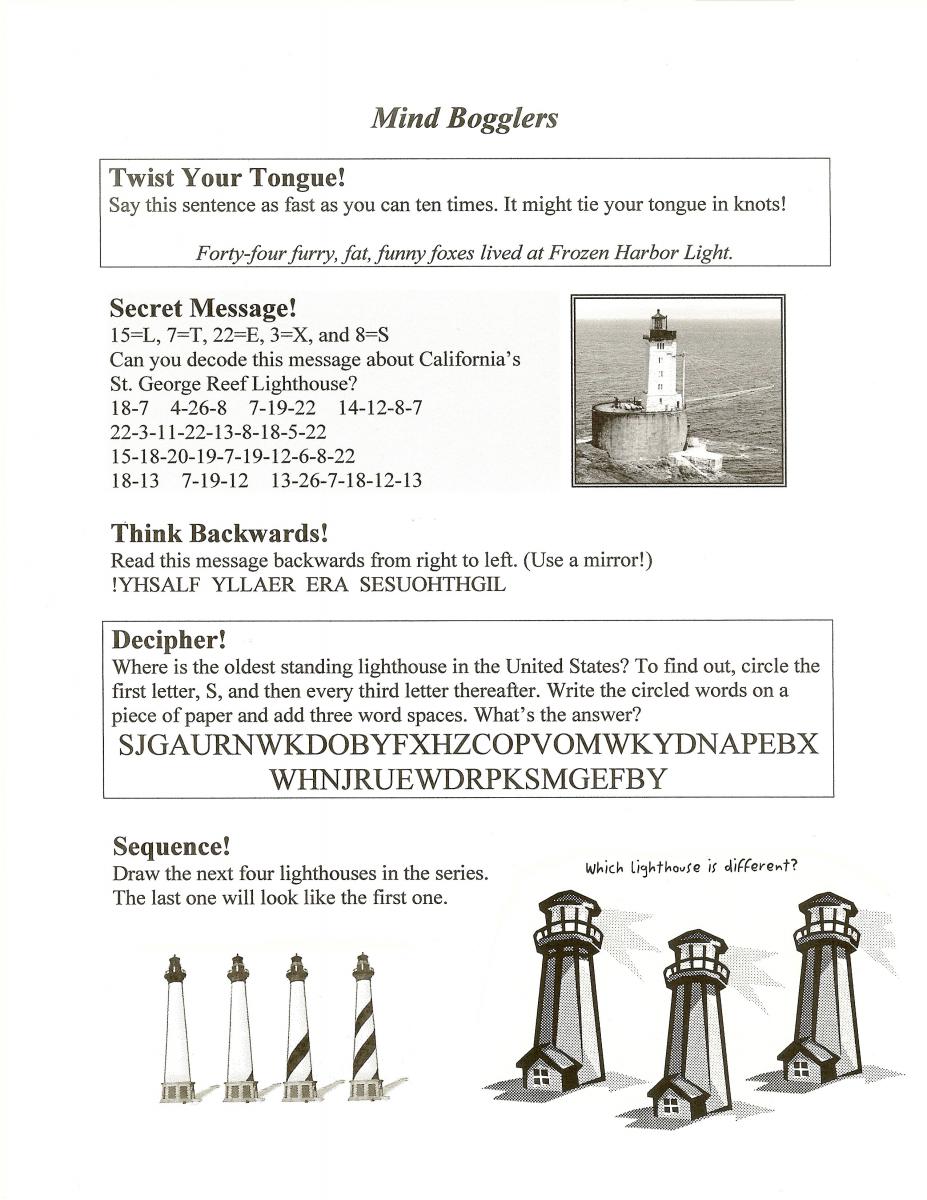 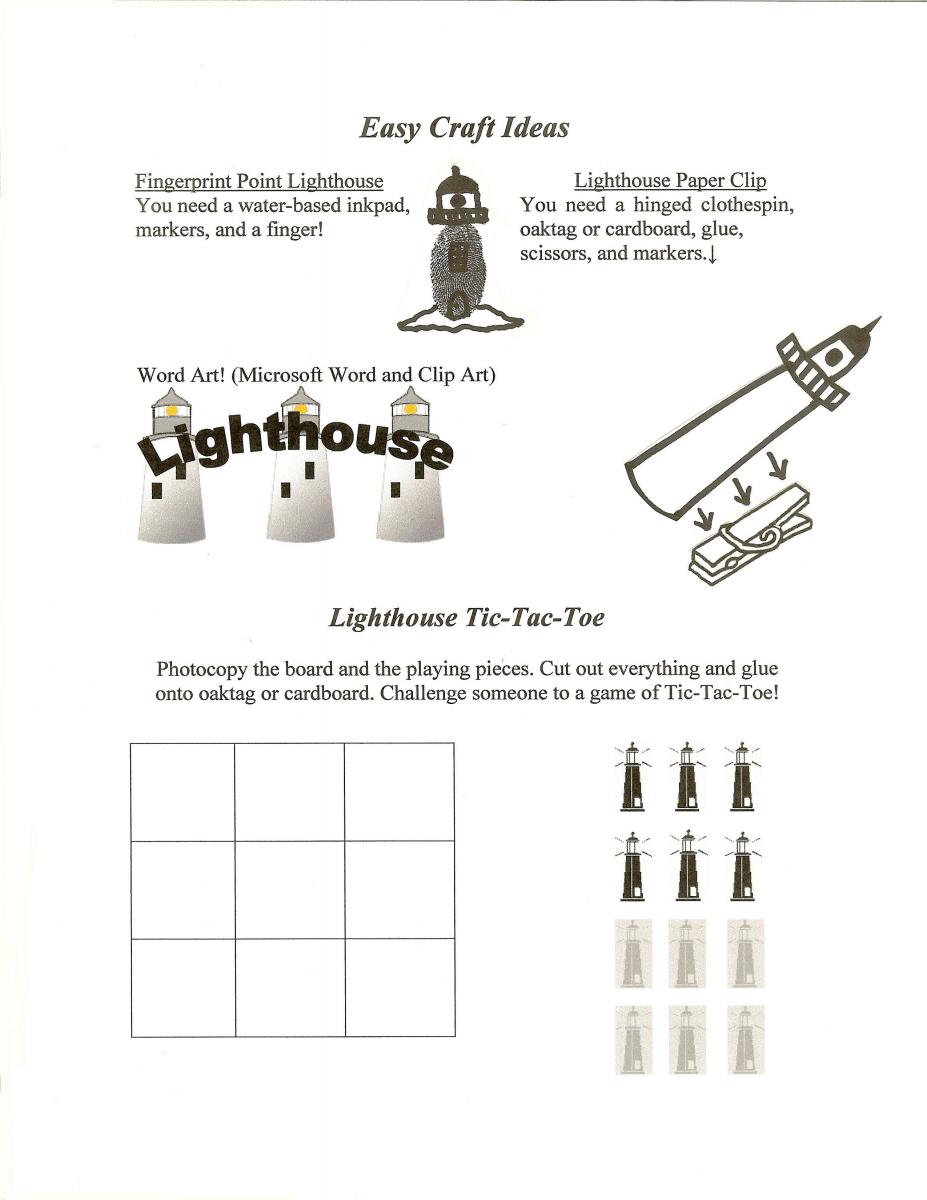 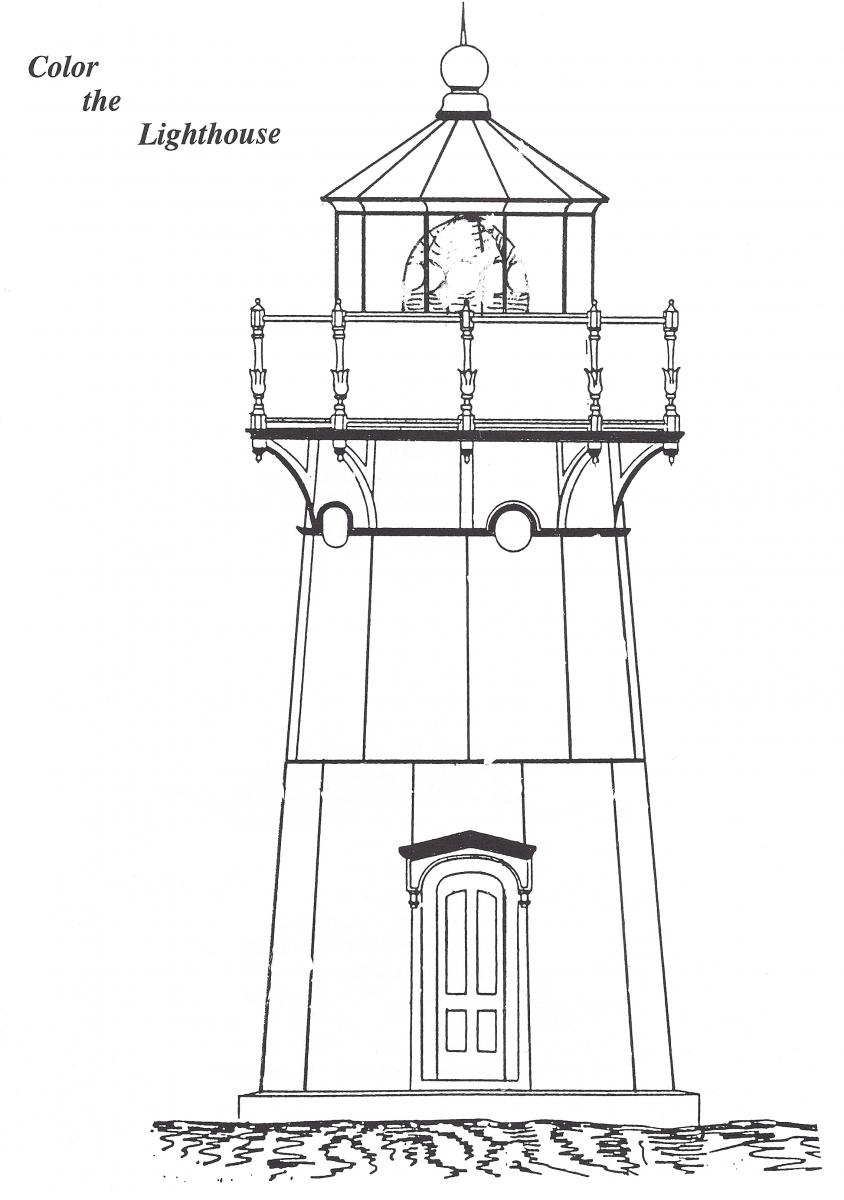 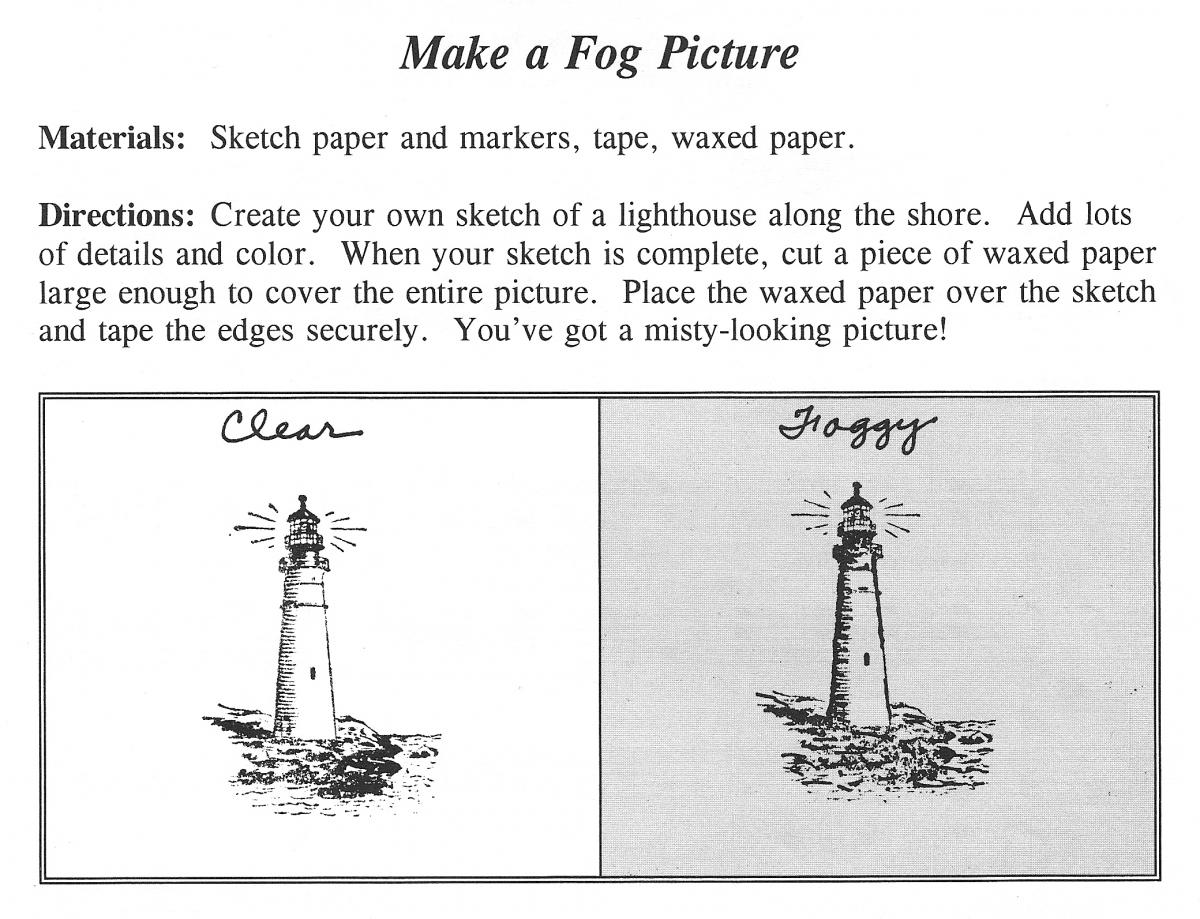 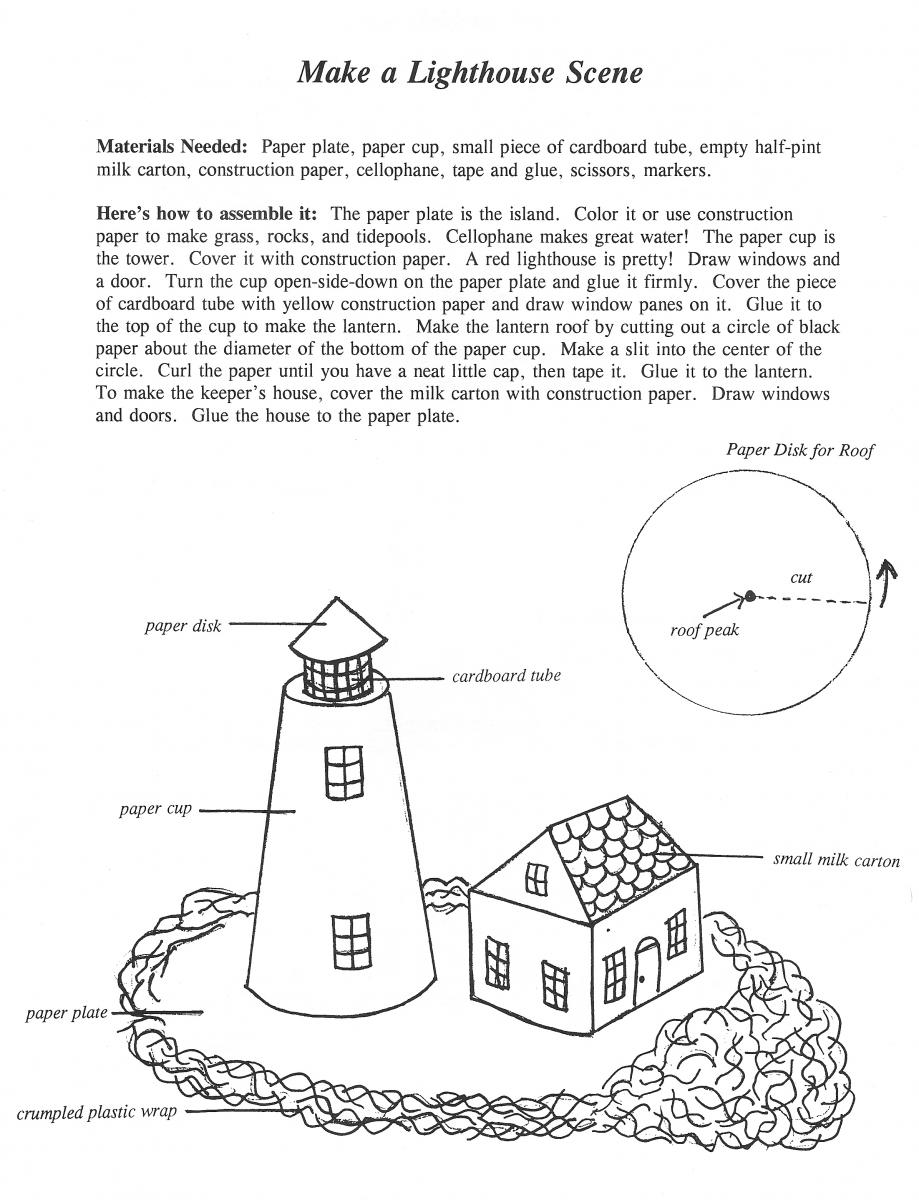