The islanders still tell of the burning of Green Island Lighthouse on the night of December 31, 1863, and of the rescue of the lightkeeper and his family.  A winter gale swept over Lake Erie on New Year’s Eve, following heavy rains and mild weather.  The thermometer made a record drop from 60º above to 25º below zero in a single hour, so polar was the front that moved down on the lake.  The Green Island Lighthouse was tended by Colonel Drake.  Pit Drake, one of his sons, had crossed over to Put-In-Bay to attend a New Year’s party at Doller’s Hall.  Drake and the other six members of his family were in their house adjoining the light tower listening to the wind and to the raging sea beating against the shore of the island.  Almost simultaneously the party at Put-In-Bay and the family on Green Island saw flames shooting up into the wind from the lighthouse.  Keeper Drake and his family braved the freezing wind and formed a bucket brigade to throw buckets of water on the flames for over thirty minutes, but the building burned fiercely in the wind.  Drake then rushed back into the house through smoke and fire and rescued a feather blanket and a straw-tick mattress to protect his homeless family.  They huddled together for warmth under the mattress and blanket in the only building left standing, the out-house, during the rest of the night while the storm raged and eventually passed. 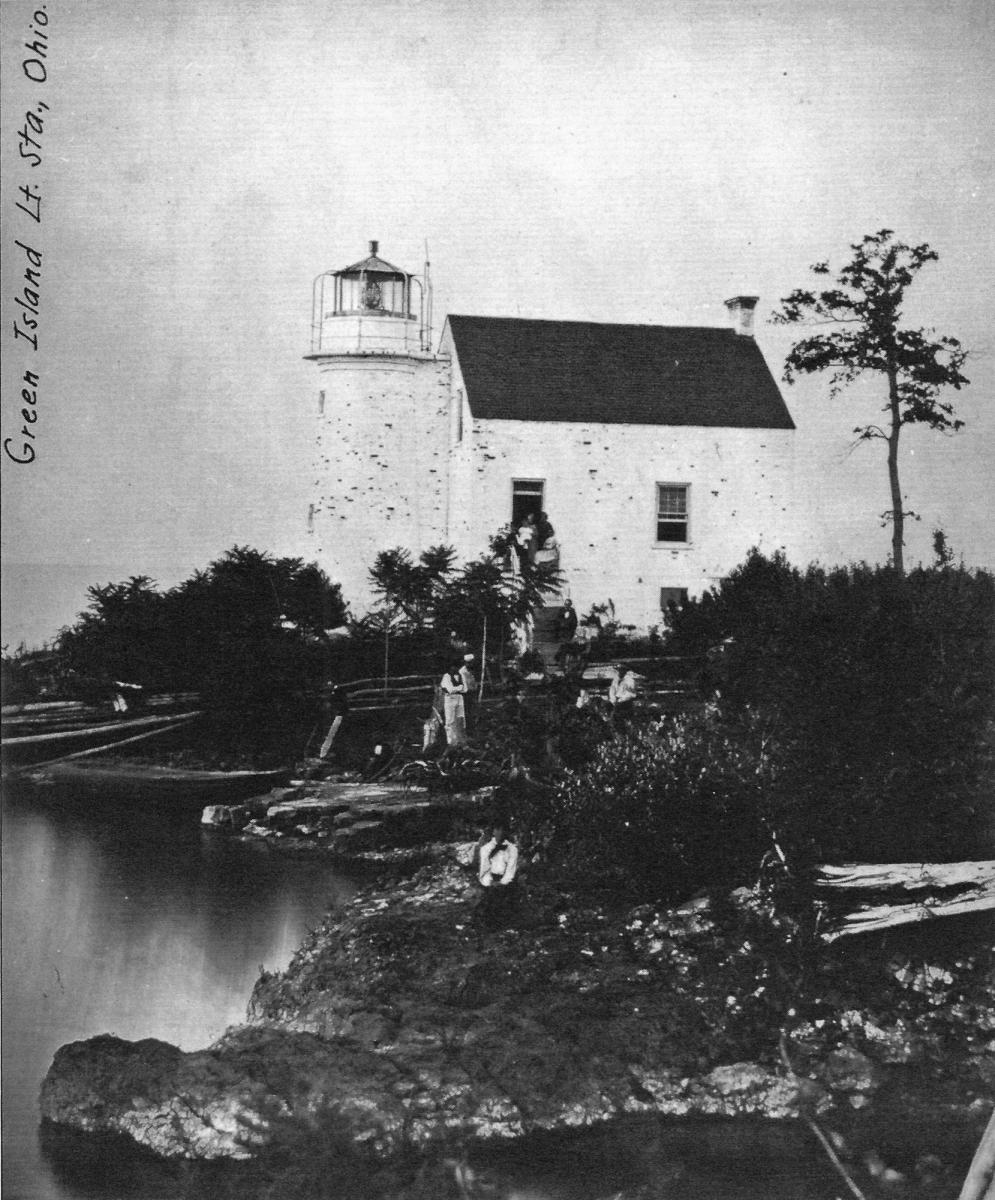 Drake’s son and the men of Put-In-Bay tried to reach Green Island during the night, but the waves were too high in the passage.  The following morning, when the three-mile strip of water had frozen lightly, they managed to cross the ice by using cutters and planks.  They laid one board on the ice, walked to the end of it, placed another one down and took up the one they had just crossed.  In this laborious and dangerous manner they reached the light keeper and his family, and took them back to shelter on Put-In-Bay.  A new lighthouse was built on the island by mid-summer of 1865, but no winter ever goes by without many retellings of the story of the night the Green Island Lighthouse burned to the ground. 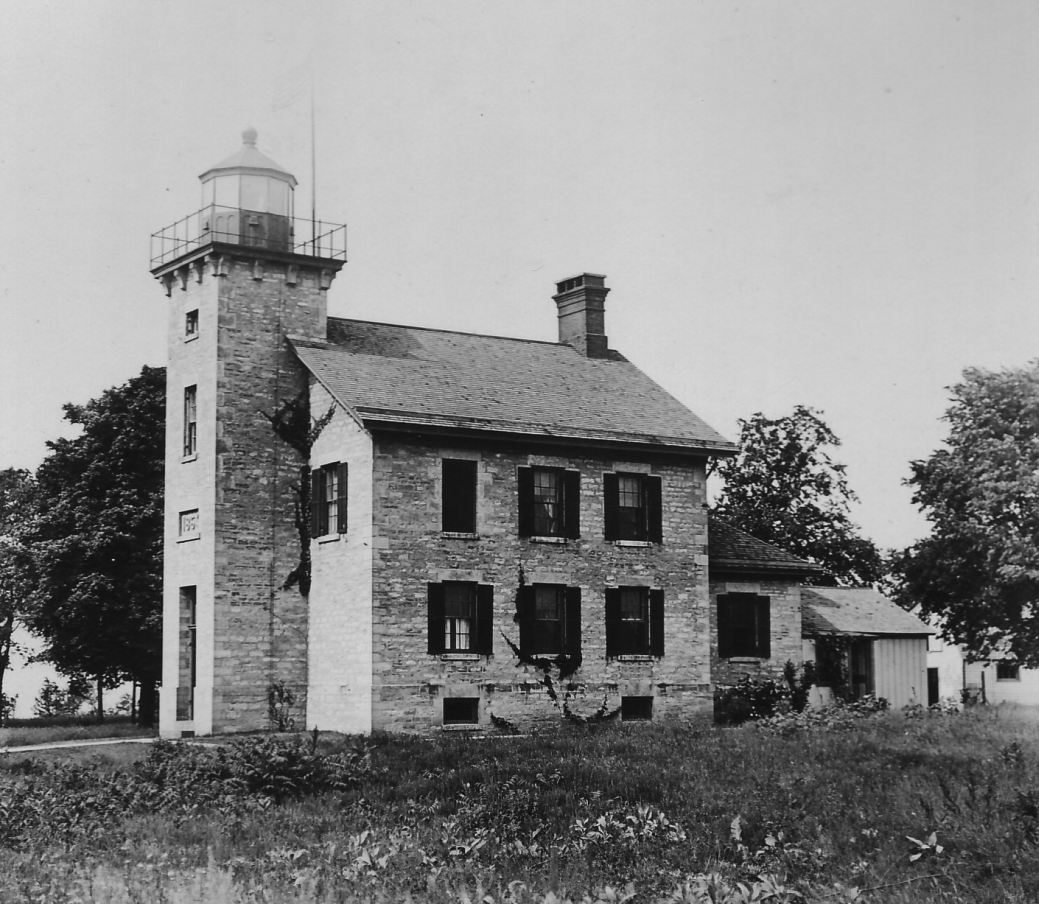 Meeting Minutes of The Lighthouse Board - April 1864

The Committee of Engineering respectfully report on the letters of the Engineer of the 10th & 11th Lighthouse Districts, dated March 29th and March 30th relative to Green Island Light Station Lake Erie.

The first letter describes the condition of the tower and Keeper's dwelling from the effects of the fire of the 1st of January last, as follows:

The ladder of the tower from the dwelling was burned, and the cast iron lantern floor plate, and the lantern glass as cracked, the sheet iron lantern roof, the cast iron gallery plate and the lens and revolving machinery being uninjured.  The wooden kitchen and shed of the dwellings and all the woodwork except the front steps, burned.  The gable wall farthest from the tower fallen in and the walls above the first floor which are of brick crumbling.  It also recommends certain temporary structures, with a view of showing a light on the opening of the navigation, these temporary structures to consist of a frame of wood to receive a steamer lens elevated 37 feet above the level of the lake, a shanty for the accommodation of the Keeper and family, and a shed for storing oil and other supplies, the estimated cost being $387.25.  In regard to these temporary structures the District Engineer says: “He (the clerk of works) now stands instructed to convey the materials to the spot at the earliest practicable moment and to go on with the temporary structures with a view of showing the temporary light by the time that navigation shall be open”

The second letter further describes the tower as in dangerous proximity to the lake, considering the feeble character of the ledge of rock on which it stands; as subject during strong westerly winds, to spray thrown to the height of the lantern, and the walls as built of inferior brick laid in poor mortar, and recommends, considering these defects and, “that a new dwelling house has to be built,” a conclusion in which the Engineer from the ruinous condition of the present house, properly advises the entire abandonment of the old structure and the building of new ones at a cost of $13,705.45.

With this summary before the board the Committee recommends for its action:

1.  That unless the reconstruction is considered as properly belonging to the appropriation for “repairs and incidental expenses, &c,” and this fund be sufficient to meet the expense, that said reconstruction be postponed until a special appropriation be asked for and made, and that in case of postponement as above, such additional temporary measures be authorized as will secure the proper exhibition of the light and the accommodation of the Keeper for the increased length of time consequent upon the same.