The first known lighthouse was the Pharos of Alexandria, Egypt. Ptolemy I and his son Ptolemy II constructed it between 300 and 280 B.C. It stood about 450 feet high. This lighthouse was one of the Seven Wonders of the Ancient World. It was destroyed in stages by invaders and earthquakes, being destroyed in the 1300s.

The oldest existing lighthouse in the world is considered to be La Coruna in Spain that dates from ca. 20 B.C. A Roman lighthouse is located on the Cliffs of Dover in the UK that was constructed in 40 A.D.

The first lighthouse in America was at Boston on Little Brewster Island (1716). The first keeper was George Worthylake who was drowned, along with his wife and daughter, when returning to the island in 1718. The original tower was destroyed by the British and eventually reconstructed in 1784.

The oldest existing lighthouse in America (never rebuilt) is Sandy Hook, NJ (1764), which is still in operation.  Part of the building of the lighthouse was paid for by the sale of lottery tickets and shipping interest in paid for the rest.

First lighthouse built completely by the Federal Government was Montauk Point, NY in 1797.

The only Triangular-shaped lighthouse tower is Sullivan’s Island in Charleston, SC.

The only lighthouse equipped with an elevator is Sullivan’s Island in Charleston, SC.

The number of lighthouses when we became a nation in 1776 was 12.

The oldest lighthouse on the Great Lakes is the Gibraltar Point Lighthouse (1808) located on the Toronto Islands, Toronto, Canada.

How was the Country Divided? After 1852 the country was divided into districts; originally eight, they eventually numbered 19. Today the Coast Guard only has ten districts. The U.S. Light-House Establishment had a district inspector (naval officer) in charge of operations. He ran the district in tandem with an army officer who was in charge of engineering projects. In 1910 civilians started replacing the military officers.

What was the total number of lighthouses in America? There were never more than about 850 lighthouses in operation at once, although about 1,500 were constructed in this country over the years -- the hey-day being about 1910. There were 267 constructed on the U. S. shores of the Great Lakes. Michigan had the most with about 140, followed by Maine with about 80.

State with the most lighthouses - Michigan with 124. (Depending on definitions, the number may be about 130.)

Where were Lightships used? Lightships were employed where the water was too deep to construct a lighthouse or it was impracticable. The first lightships were located in the lower Chesapeake Bay (1820) and the most stations were in 1915 when there were 72 lightships manning 55 stations. The extra ships were used for relief. Lightships displayed lights at the tops of their mast(s) and in foggy areas sounded a bell or other fog signal such as a whistle, siren or horn. In 1921, lightships began being equipped with radio beacons. The last lightship was removed from the Nantucket station in 1984.

Did the keepers wear uniforms? Uniforms were not introduced into the service until 1884.

What is a Daymark? Towers are given special (painted) patterns -- diamond shapes, spirals, stripes, etc. -- or colors to distinguish them from each other. These patterns were known as daymarks.

Did women serve in Lighthouses? Lighthouse keeping was one of the first U.S. government jobs available to women in the 19th century. 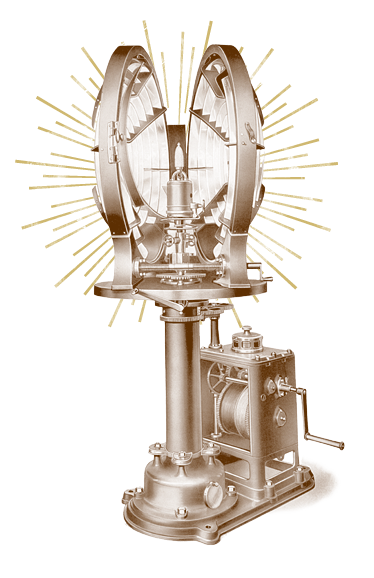 The Lighthouse Service was created in 1789 by the 9th Act of the first Congress. Over the years, lighthouses were placed under the direction of the Department of Revenue (this department was disbanded in 1820), Treasury (until 1903), Commerce, and Transportation. The Lighthouse Board (of the U. S. Lighthouse Establishment) held sway from 1852 to July 1, 1910 when Commerce created the Bureau of Lighthouses. The Coast Guard took over on July 7, 1939.   The Lighthouse Board divided the country into Districts in 1852:  there were originally 8 and then eventually 19.  Today the Coast Guard only has 10 districts.

The source of light is called the "optic" (be it electric or fueled by oil); the magnification of the light is caused by the "lens." This is located in the "lantern" of the tower and the glazings (windows) are called storm panes.

The first fog signal in this country was at the Boston Lighthouse, and it was a cannon. Other fog signals have been whistles, sirens, reed trumpets, bells, diaphone (BEEEEooooh) horns and diaphragm (brrrrrrrrr) horns.

The first American lighthouse to use electricity was the Statue of Liberty in 1886.

The most powerfull lighthouse in the Western Hemisphere is the Sullivan Island Light in Charleston, SC.  It originally had 28 million candelas (candlepower) but the light was actually too dazzling and  the power was lowered to 1.2 million candelas.  It could still be seen over 26 nautical miles (48 km; 30 mi)

What are lighthouses made from? Lighthouses are constructed of wood, granite, brick, sandstone, steel, cast iron and reinforced concrete. One has an outer skin of aluminum.

How many keepers were there in a lighthouse? One to five keepers manned the light stations.

Were there female keepers? There were many female lighthouse keepers (the Society has files on 80), but most obtained their position when their husband died or became incapacitated.

What did keepers receive for pay? Keepers were paid a lower middle class wage. George Worthylake, our first, received 50£ ($250) a year. By today's standards that would be the equivalent of $16,000. During the 19th century, the head keepers' pay ranged from $250 to $600; others were paid less. The exception to this was in the west, where keepers were paid $1,000 during the Gold Rush.

What is the range of the lighthouse light? The most powerful optic produces a light seen 25 miles at sea, although aircraft have reported "picking up" a light at 40 or 50 miles due to reflections off clouds.