The decade of the 1850's could well be called the "Age of the Clipper". The Carrier Pigeon departed Boston on her maiden voyage January 28, 1853 and on the morning of June 6th she was sighted of Santa Cruz. The ship continued in a thick fog blanket concealing the shoreline. Believing he had verred far from shore, Captain Azariah Doane steered the vessel towards the coastline and then came the sound of splintering timbers as the ship's hull drifted into the grasp of the jagged sea bottom. News of the tragedy touched both coasts, and the location of the disaster would, from that time on, be called Pigeon Point. 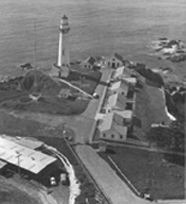