Daybeacons - The Anonymous Lifesavers of the Sea

They have no shining light, dutiful bell or raucous horn; nor do they possess a beautiful superstructure, but make no mistake about it, the daybeacon is a lifesaver just like its aids to navigation cousins, the lighthouse, light tower and buoy.

According to the United States Coast Guard, daybeacons are “aids to navigation, which are permanently fixed to the earth’s surface.” The Coast Guard goes on to explain that unlighted daybeacons “exhibit a daymark to make these aids to navigation readily visible and easily identifiable against background conditions.” Furthermore, daybeacons are classified as minor aids to navigation (ATON), which would seem to indicate to those less familiar with ATON that they might somehow be less valued than other more substantial aids, but as any professional mariner or fisherman will quickly tell you, there is no such thing as a less-than-relevant aid to navigation when it comes to safety.

Thus, there is nothing minor at all about daybeacons. You might say these unassuming aids simply safeguard mariners from terrible seafaring dangers as part of their day job. Nowhere is this truer than along the rocky coast of Maine where unforgiving ledges concealed just below the waterline at high tide have wreaked havoc on unsuspecting vessels throughout history.

I.W.P. Lewis, civil engineer, noted in the 1843 report, Examination of Light-House Establishment; Letter from the Secretary of the Treasury, “The shores of Maine are different from any other portion of the United States, in the peculiarity of conformation produced by innumerable indents, and deep bays, filled with immense groups of rocky islets. Fogs of uncommon density are frequent and of long duration on this coast, often suspending all navigation for a week or more.” Lewis went on to note, “The great rise of tides, and consequently rapidity of currents, also present difficulties to the seaman; but the greatest danger arises from the host of sunken ledges that everywhere abound, in the midst of the largest bays, in the narrowest channels, or offshore at the distance of some miles.”

In the days of sail, it was not uncommon for vessels to founder on these sunken ledges. The schooner Rover of Deer Isle, Maine, under the charge of Captain Joseph Robbins, was lost on Maine’s Fiddler’s Ledge at the entrance to the Fox Islands thoroughfare in 1892. The December 13, 1892, edition of the Bangor Daily Whig & Courier states, “During a heavy blow he attempted to put his boat in condition to stand in, but the wind drove her under water, and sank, those on board having barely time to escape in the boat. The captain had not even time, before the boat sunk, to bring from the cabin his coat, in the pocket of which was $15 in money."

Nearby Drunkard’s Ledge was the scene of another shipwreck on October 11,1906. The Daily Kennebec Journal captured the scene at the time, noting, “in a heavy northwest gale tonight, the new four-masted schooner Helen B. Crosby struck on Drunkard Ledge at the entrance of North Haven thoroughfare leading to the mouth of the Penobscot River and will probably be a total loss, as the seas are breaking over her heavily.” The schooner was under the command of Captain C.T. Wallace, and though the vessel was lost, all hands were saved by escaping the doomed schooner in a dory and a gasoline launch. 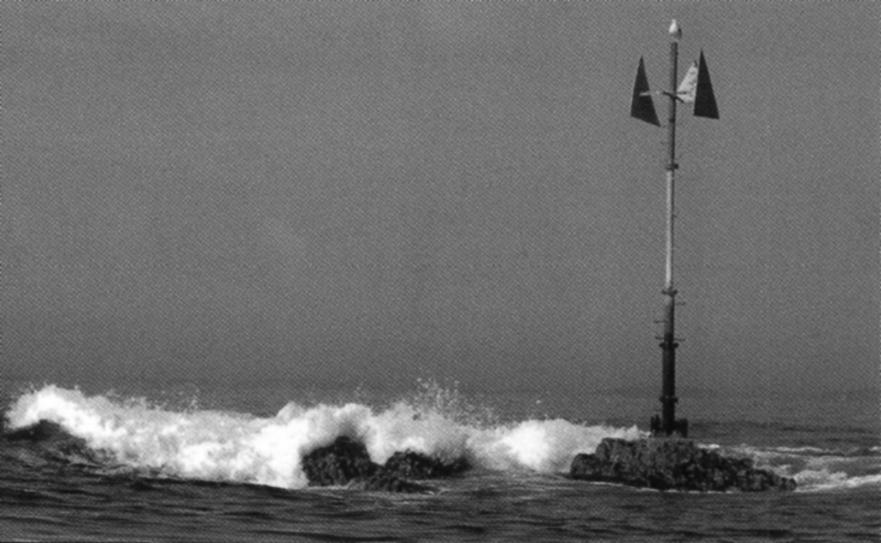 Given the innumerable dangers posed by rocky ledges within Maine’s navigable waters of irregular depths and abrupt approaches, it was unfeasible for the U.S. Lighthouse Service to attempt marking these hazards with lighted aids and buoys, thus the daybeacon became a practical and economical solution at many locations where there was a need to provide daytime guide to mariners.

The earliest daybeacons in Maine consisted of four-sided pyramids, cones and obelisks, often times referred to as stone beacons or monuments in navigational light lists of the time. By the latter part of the 1800s, iron spindles or wooden posts and tripods constructed of either iron or wood came into vogue and proved much more economical to construct. A typical daybeacon in Maine during the late 1800s consisted of a wrought-iron shaft, 8 to 10 inches in diameter at the base and rising some 30 to 40 feet in the air. The distinguishing top mark that surmounted these daybeacons varied in shape and size. Some descriptions for late 1800s top marks include a spherical cage four feet in diameter, a cask on its end, a copper cylinder with a gilt ball on top, four vanes, vanes at top showing like a cylinder, and a wheel on its side mounted atop a daybeacon (similar in appearance to an iron wagon wheel) with pendants dangling down.

One daybeacon description that is really difficult to imagine, in terms of how the aid would have appeared structurally, can be found in the 1888 Annual Report of the Lighthouse Board. According to the report, a daybeacon was established at Lowell Rock near the entrance to Maine’s Rockport Harbor that was described as an iron spindle, 12 feet long, surmounted by a cage 11 feet long, with ball on top.

Today most daybeacons are constructed of iron spindles, pilings or wooden posts supporting a daymark consisting of wooden dayboards that are triangular or square in shape. These dayboards often display an identifying number as part of the U.S. Aids to Navigation System, which is consistent with the International Association of Marine Aids to Navigation and Lighthouse Authorities (IALA) Maritime Buoyage System. The U.S. Coast Guard does such a professional job in establishing and maintaining daybeacons along our waterways today that we often take this commitment to navigational excellence for granted, but ATON were not always maintained in this manner. The U.S. Lighthouse Board, which assumed control of America’s aids to navigation from the Fifth Auditor of the Treasury in 1852, quickly determined: “not unlike similar conditions with our nation’s lighthouses at the time, that the structural integrity and strategic placement of daybeacons in Maine was deplorable.”

The 1857 Report of the Finances (Treasury Department, Office, Lighthouse Board) stated, “The daybeacons along the coast and in the navigable waters had, from long neglect (prior to 1852), become nearly useless to the mariner, for want of proper distinction by color, etc., and many of them had fallen into such a dilapidated state that they were obstructions to navigation.” The report went on to note, “Small iron spindles upon rocks awash, and slight masonry structures upon sands, over which strong tides are constantly passing, and on the eastern coast, accompanied by heavy masses of floating ice, serve only to annoy and disappoint the mariner who relies upon them as guides, and are a source of never-ending expense to the government in replacing or repairing them. The attempt has been made, so far as the means available would admit, to rebuild those beacons, which have been destroyed or required to be repaired, as well as those which were in danger of being destroyed, in such a manner as to effectually resist the various elements to which they may reasonably be expected to be subjected.”

Though the U.S. Lighthouse Service made every attempt to ensure that daybeacons were better positioned and constructed, these structures were still subject to the fury of the sea, and given their exposed locations, it was unavoidable that daybeacons would be destroyed from time to time. Over the years the power of the sea has made no distinction between daybeacons built of wood, spindle of stone. Some examples of this indiscriminant destruction can be found in the pages of history when researching Maine daybeacons.

The granite daybeacon at Fiddler’s Ledge, which helps mark the western entrance to the Fox Islands thoroughfare between the islands of North Haven and Vinalhaven, was destroyed in 1879 despite its heavy stone construction. According to the 1889 Annual Report of the Lighthouse Board, “The old stone beacon upon this ledge was destroyed by the sea and ice, in January, 1879. Its reconstruction with increased dimensions, was commenced late in the fall of that year, and resumed in May of 1880. As the ledge is covered at half-tide and is in a position very much exposed to southerly gales, the work has progressed somewhat slowly.” If the sea could claim a stone daybeacon like Fiddler’s Ledge, it should come as no surprise that the same power could lay waste to the wooden tripod daybeacon at Shag Rock, which marks a half-tide ledge near Owls Head Light Station and the entrance to Rockland Harbor. 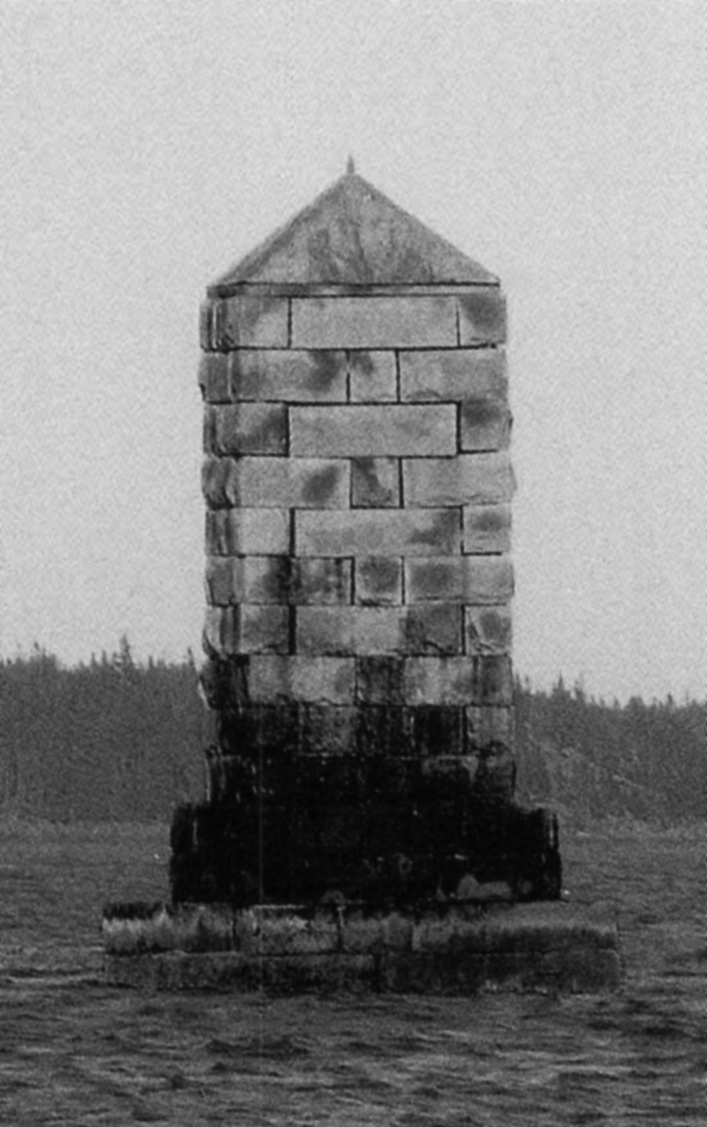 The 1896 Annual Report of the Lighthouse Board noted, “A wooden tripod, 57 feet high, the upper half covered with boards, was carried away in January; a temporary tripod, 25 feet high, having the same general appearance as the former one, was erected in its place in February.” As interesting as the history and construction styles of Maine’s daybeacons can be, sometimes the names of these dangerous ledges can be even more fascinating.

The Story of Maine: Coastal Maine by L. Whitney Elkins in 1924 contains a chapter that describes crossing Penobscot Bay from Rockland, at which point the author mentions the dangerous Drunkard’s Ledge. According to Mr. Elkins, “Suddenly right beside the steamer’s course the surf breaks and boils over a jagged ledge all awash with foam. And known far and near as The Drunkard: and as the foaming water momentarily recedes to the lower sea as if swallowed at one gulp, the newcomer cannot restrain the exclamation ‘What an old drunkard he is!’” The author goes on to talk about another nearby daybeacon at Fiddler’s Ledge. He notes, “In the next moment The Fiddler comes to view another surging reef surmounted by a beacon. The people hereabout, so we have heard it averred, tell their children and credulous travelers that in old times a drunken captain ran his vessel on these rocks and fiddled merrily as his ship pounded against the ledge, and when she at length floated off, immediately she ran upon The Drunkard and went down.”

The daybeacons at Drunkard’s Ledge and Fiddler’s Ledge remain active aids to navigation and are maintained by the U.S. Coast Guard. They also maintain other historic stone beacons and monuments in and around Penobscot Bay that date back to the 1800s such as Porterfield Ledge near Rockport and Hosiner Ledge in Castine Harbor. 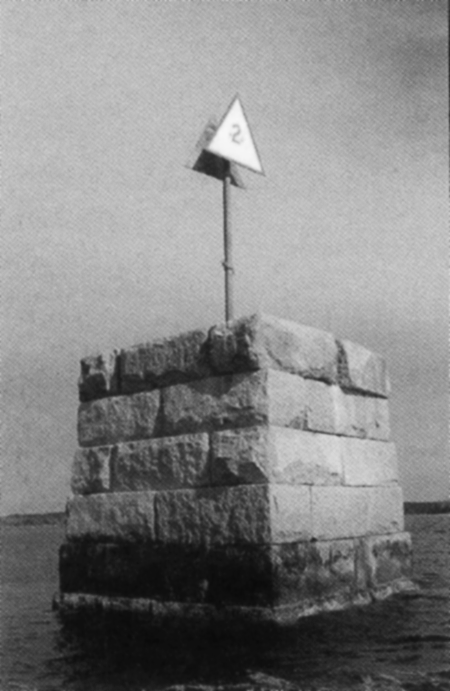 Daybeacons will never rival lighthouses when it comes to garnering the affection and appreciation of the general public, but these modest aids to navigation have helped safeguard mariners at some of the most dangerous seafaring locations along our rocky coasts.

Quiet effectiveness is the legacy of the daybeacon, “the anonymous lifesaver of the sea.”

Rock warnings are another form of navigation aid. There are many forms of rock warnings in use around the world and below are just a few examples. 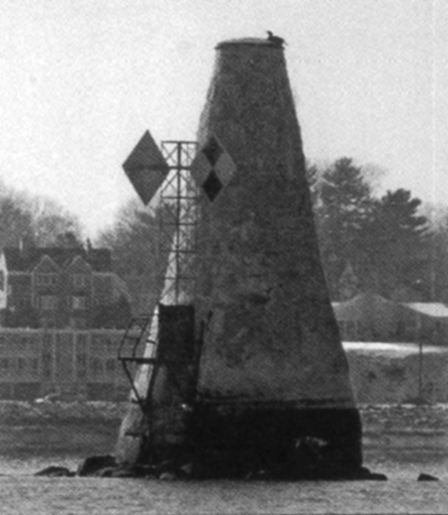 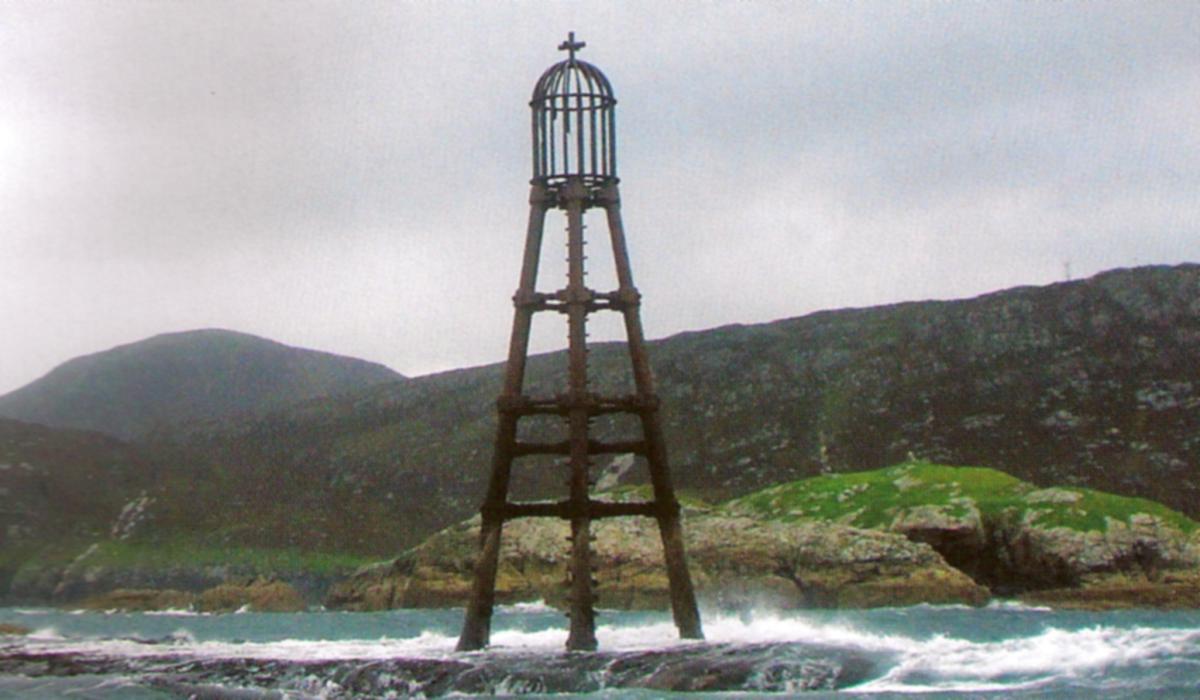 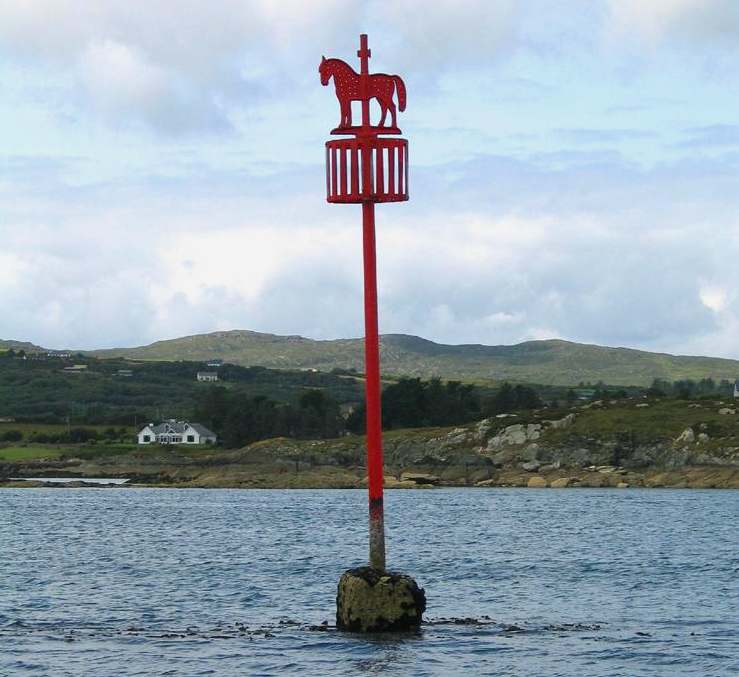 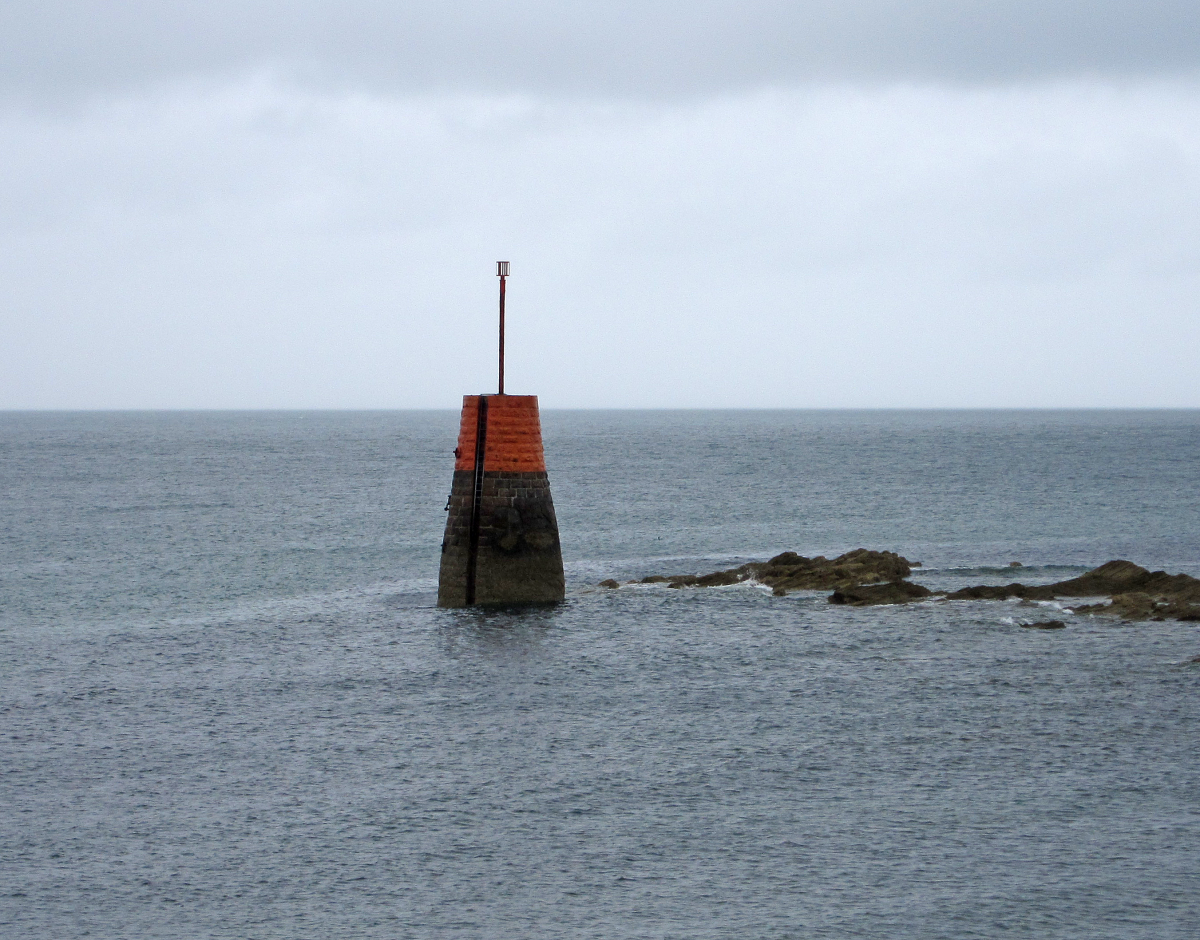 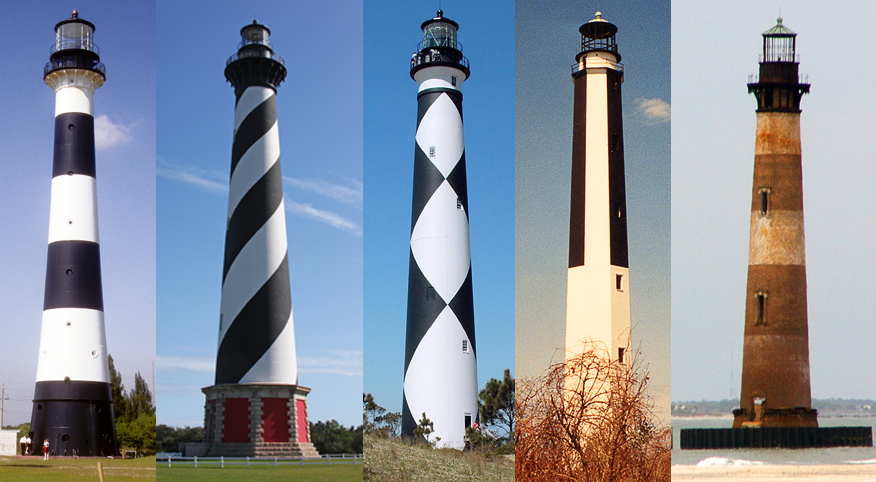