Stamp collecting can be a fun way to learn about many things, including lighthouses. Not only can you identify which countries have lighthouses, but you can also see what they look like. Sometimes you can find informative material about lighthouses, such as where they are located, their characteristic, the types of lighting apparatus, in addition to related subjects such as the Coast Guard, buoys, and lifesaving.

Every year new stamps are issued around the world showing lighthouses. Unless you are a stamp collector, the stamps you are most likely to see are those of the United States. Recently the United States Postal Service (USPS) issued a set of five stamps in the summer of (2007) featuring Pacific lighthouses. They are Diamond Head in Hawaii, Five Finger Islands in Alaska, Gray’s Harbor in Washington, Umpqua River in Oregon, and St. George Reef in California.

The set of Pacific lighthouse stamps complements three other sets of postage stamps the USPS has issued in recent years depicting lighthouses around the country:

(Editor’s Note: The U. S. Lighthouse Society has framed plaques of the 1990 and 2003 stamps. Each framed series contains the five stamps, the society logo, and a first day cover of one of the stamps. The plaques cost $65.00 postpaid) 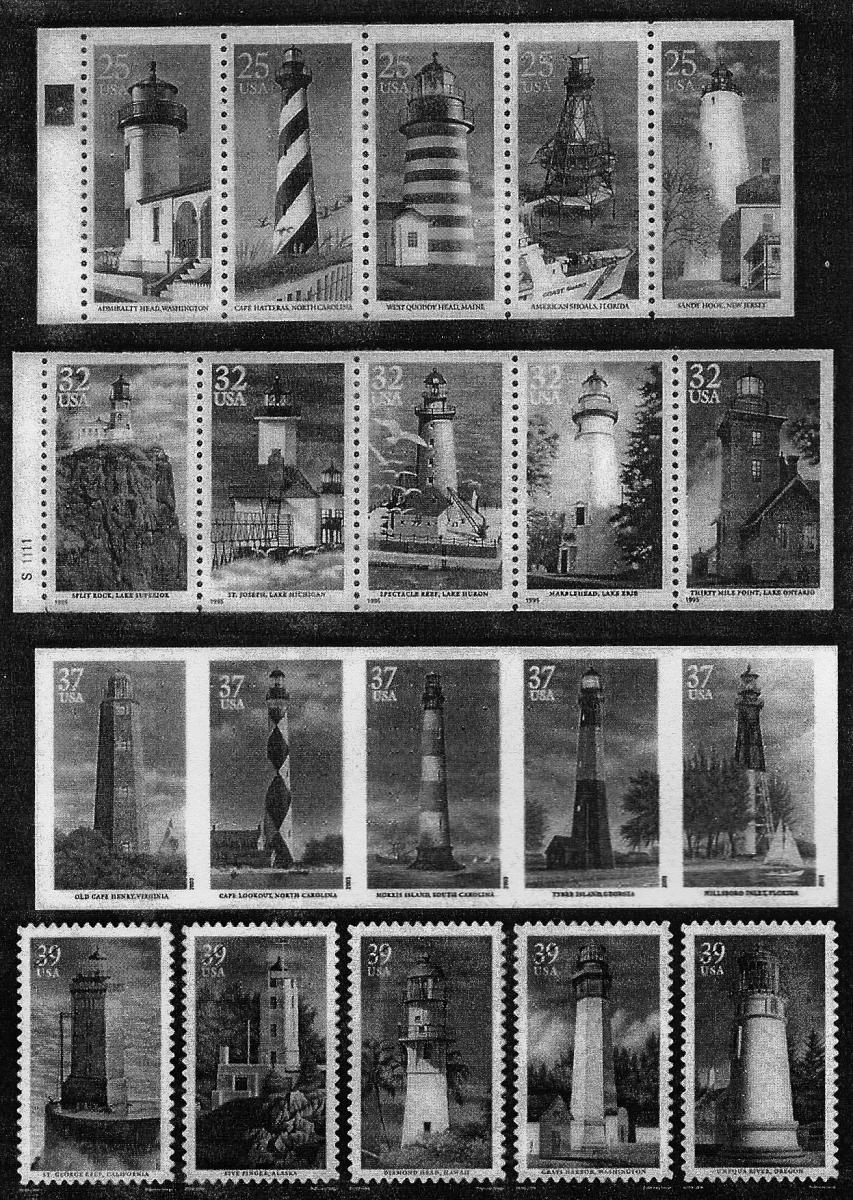 While the stamps mentioned above were issued specifically to recognize lighthouses, the United States has issued many other stamps that show lighthouses, although the lighthouses were not the reason the stamps were released.

The Statue of Liberty, one of the most famous national monuments in our country, was once a lighthouse. Shortly after the statue was dedicated in 1886, President Grover Cleveland turned the statue over to the Lighthouse Board, lighting it on November 22, 1886. The Lighthouse Board maintained the light until March 1, 1902 when the Board turned the statue over to the War Department, that maintained it for several more years. Now the statue is a National Park. Many stamps have been issued showing the Statue of Liberty, the first one in 1922. The statue can still be found on stamps currently available from the Postal Service.

In 1935 the U.S. issued a stamp showing the California-Pacific International Exposition in San Diego. The international fair was held during 1935-36 in San Diego’s Balboa Park. Several San Diegans decided to organize the fair to boost the city’s economy during the Great Depression. In the background of the stamp can be seen the old Point Loma lighthouse. Although a mere speck on the stamp, under a magnifying lens the lighthouse is clearly recognizable, demonstrating the attention to detail that the engraver took in making the stamp.

Artist Edward Hopper made several paintings of the Cape Elizabeth Light Station in the 1920’s, one of which is reproduced on a 1970 stamp celebrating 150 years of statehood for Maine. The stamp shows the east tower and keeper’s residence. Originally the light station had two towers, but the western tower was discontinued as a beacon in 1924. The lighthouse with its two towers first went into operation in 1828, eight years after Maine became a state.

The centennial of the national parks was the theme of a se-tenant set of stamps (multiple stamps joined together to form one picture) issued in 1972. The four stamps show the Cape Hatteras National Seashore, with the Cape Hatteras lighthouse in the upper right of the seashore scene. The nation’s parks system began in 1872 when Congress established Yellowstone as our first official national park.

Sandy Hook lighthouse in New Jersey was pictured on a 1978 stamp in the “Americana” series reflecting American values and history. Stamps featured subjects such as freedom of speech, freedom of the press, love of liberty, Paul Revere’s midnight ride, and the westward movement. Sandy Hook represents, as is inscribed on the stamp, the “Lonely Beacon-Protecting Those upon the Sea.” 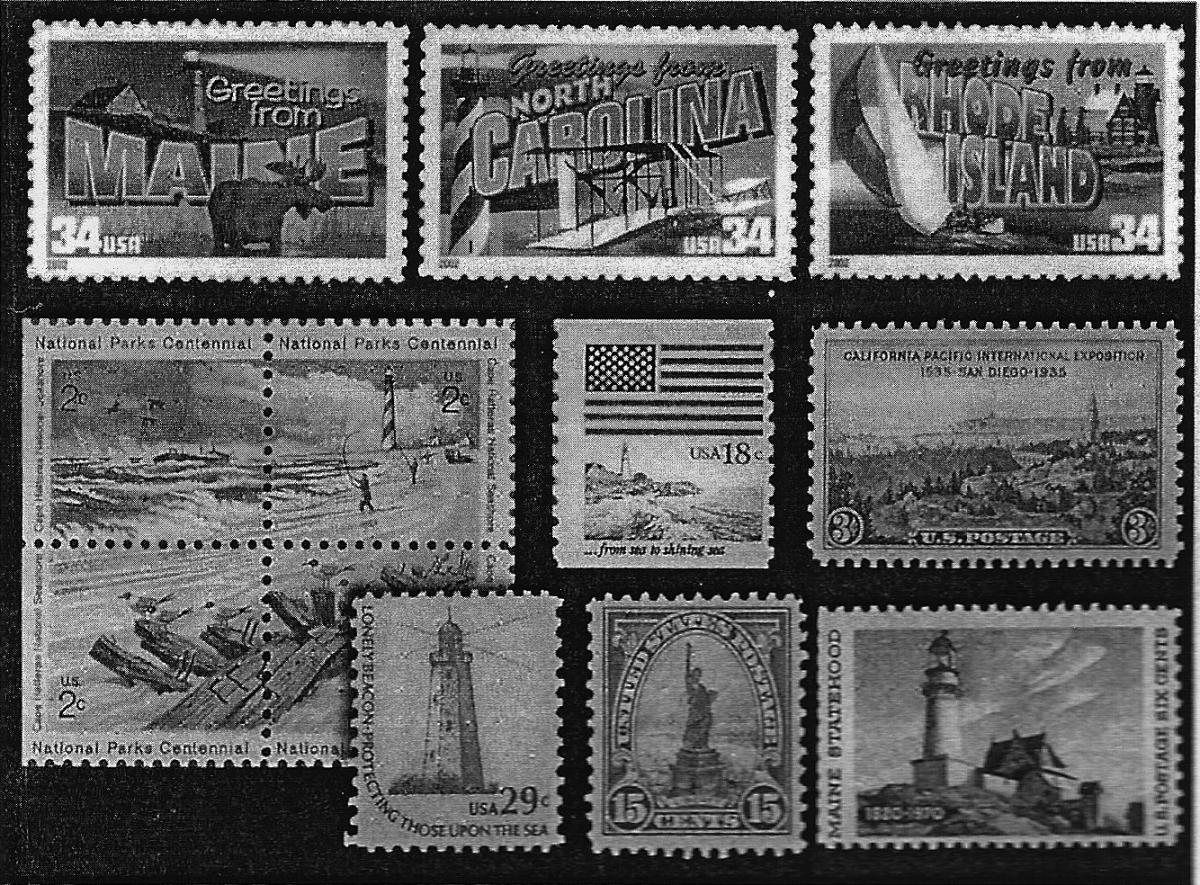 Many other countries have issued postage stamps glorifying many of their lighthouses.

Others go a little further than simply presenting an image of a lighthouse and show the location, the characteristic or provide some descriptive text. For example, the Canadian stamp of the Sisters Islets lighthouse in British Columbia states the light flashes twice every 15 seconds. The focal plane is 21.3 meters, and the range is 21 miles. It also has a radio beacon that transmits the letter “M.”

Cuba also issued several sets of stamps picturing lighthouses. The Cayo Jutias lighthouse is located on the northwestern end of the island.

Estonia not only shows the location of its lighthouses, but gives the latitude and longitude to be even more precise. The Ristna lighthouse is at 58 degrees, 56 minutes, 40 seconds north latitude and 22 degrees, 3 minutes, 31 seconds east longitude. 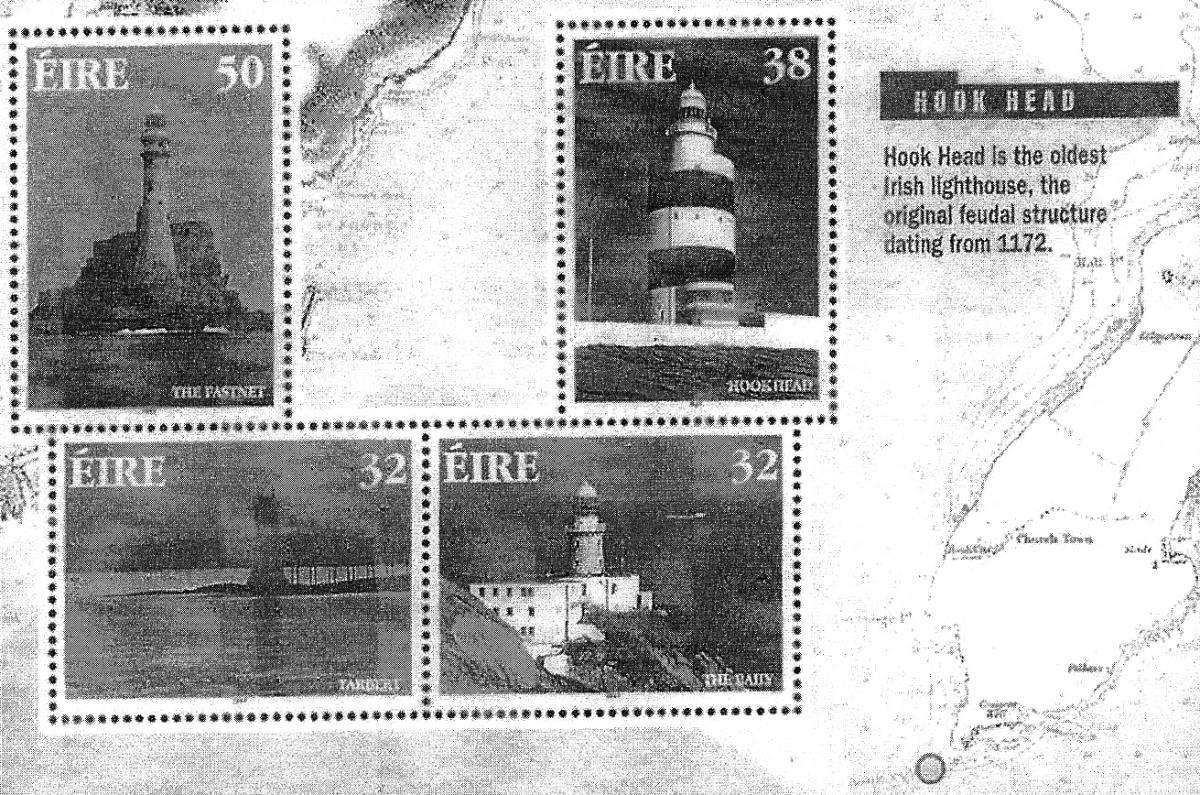 The sun valve, a device used for automatically turning a light on and off, is depicted on a stamp from Sweden. Its inventor, Gustaf Dalen, appears in another Swedish stamp. (Editor’s Note: Refer to the Summer 2006 issue of the Keeper’s Log for an article on Dalen and his inventions.)

Shipwrecks were common in the 1800s, and many people called “wreckers” made a living salvaging anything they could, often killing any survivors, although in later years wreckers saved the crew before claiming the ship. Lighthouses initially posed a threat to these wreckers and it wasn’t beneath them to set up a false light to draw ships into the rocks. A stamp from the Bahamas shows “Wrecking in the 1800’s with a ship smashed upon rocks.

Safety at sea is paramount today, and Great Britain has issued a set of four stamps showing a lifeboat, the Beachy Head Lighthouse, a communications satellite, and a signal buoy. The country also released a stamp honoring 150 years of Her Majesty’s Coast Guard. The Isle of Man, located in the Irish Sea and a crown possession of the United Kingdom, has issued stamps to commemorate the Royal National Lifeboat Institution. Sweden has also issued stamps for its lifesaving society. 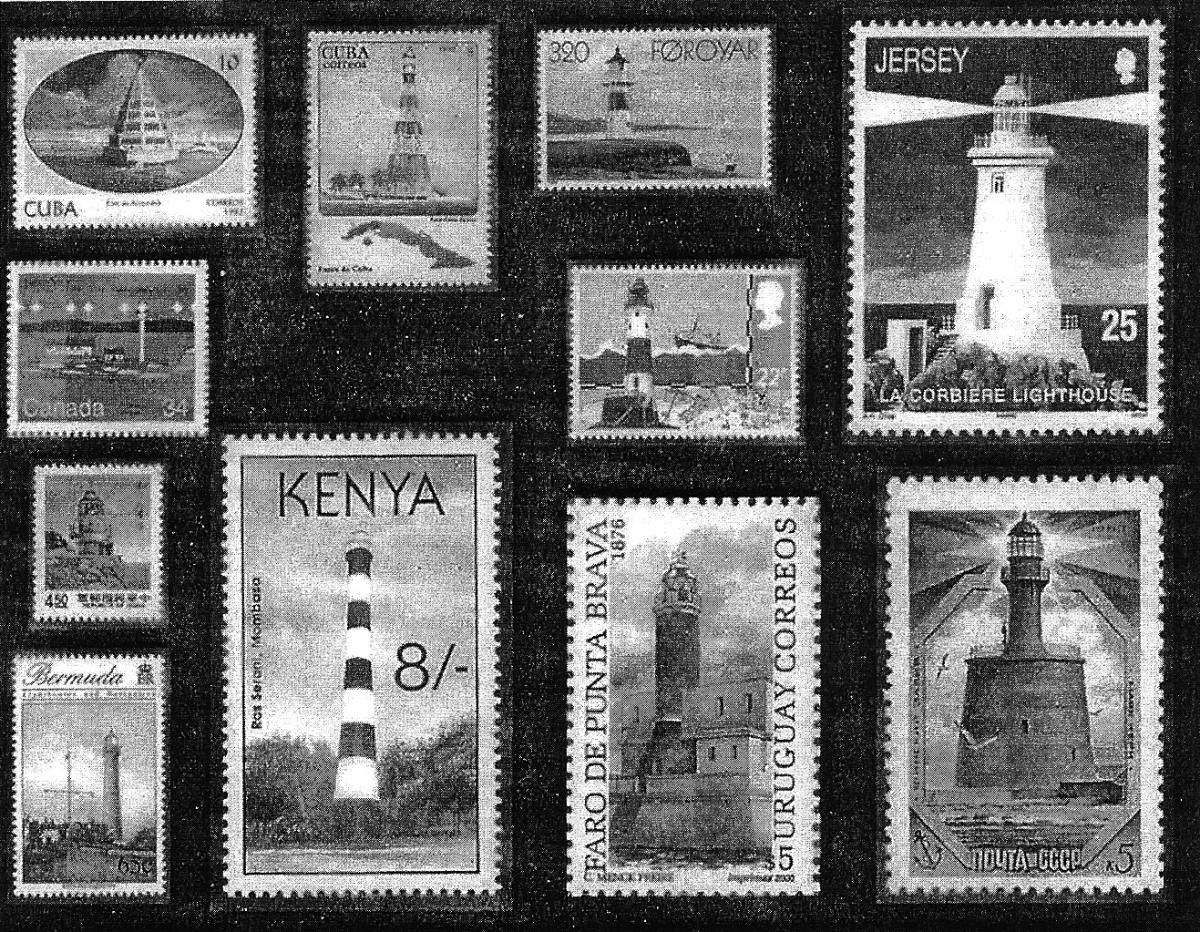 Postage stamps can provide a fascinating story about lighthouses and related topics. As a final example, perhaps the oddest lighthouses, at least to Westerners, are the pagoda lighthouses in China that include the Mahota Pagoda in Shanghai. In AD 874, monk RuHai built the pagoda in the middle of the Mao River, hanging a lantern from the top at night. It continued to serve as an aid to navigation until the end of the Song Dynasty (AD 1279). Today the pagoda is a national historic relic.