Covers, cancels and cachets go together like horse and carriage and lots of good fun. There is hardly a stamp collector, whether the collector has just a few lighthouse stamps or has a worldwide collection of thousands of stamps, who does not have one or two favorite covers.

Let’s look at covers. What are they? What kinds of covers are there? Why do people collect them? By definition, a cover is an envelope that has passed through the mail, has been franked with either a postage stamp or meter stamp and appropriately cancelled. Covers come in many forms. One of the most popular is the first day cover (FDC). With very few exceptions whenever a new stamp is issued by any country in the world, a first day cover is also specially prepared for collectors. In many foreign countries the Postal Administration prepares the first day cover and they are sold to customers along with other postal items; i.e., stamps, cards, air letters. To date the U.S. Postal Service has not prepared any FDCs. In the United States the majority of FDCs are prepared by commercial companies that specialize in covers and by private individuals. Whether they are done commercially or privately, the procedure is much the same. Usually some sort of a cachet is applied to the left hand side of the cover. The particular stamp is attached and the cover is taken to or mailed to the post office designated as the place of issue for the new stamp and the stamp is cancelled with a special FDC cancel. 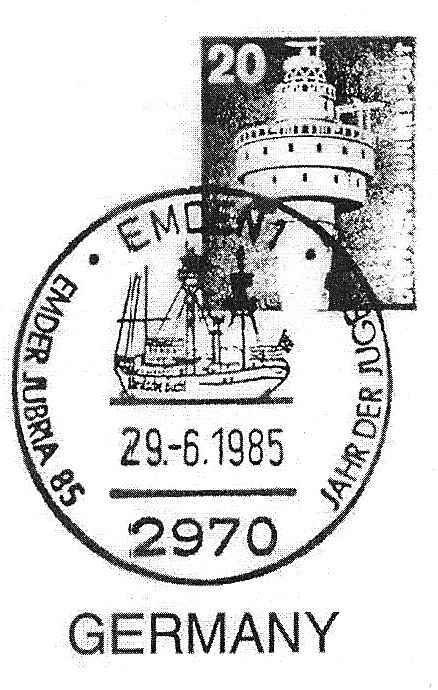 First Day Covers are purchased in one of two ways. They can be mailed to you as the customer. This way the cover comes to you through the mail addressed to you. The purist thinks this is best. It actually came through the mail or we say, it was postally used. The hazard in this procedure is that the cover may be damaged or defaced in some way in its travels through the postal system. Other collectors prefer to have the unaddressed cover sent to them in another envelope. This way the cover will arrive in the best possible condition. Both addressed and unaddressed FDCs may be purchased at any time from stamp dealers.

Privately prepared FDCs are often very beautifully prepared and are highly prized collectors items. Usually the individual who prepares the cover is a talented artist and will prepare a very attractive cachet for the cover. For this type of cover the cachet is the feature attraction. Many are truly beautiful works of art. Sometimes only one or two copies of the cover are produced and may be kept by the individual artist or traded with other cachet makers. Other cachet makers will have their covers produced in limited number (25 to 100 + or -) and sell them to the public.

Another very popular type of cover is the one produced by a stamp club or other similar organization. These covers are generally prepared and sold to make money for the club or organization that prepared them. Usually they are printed in limited quantities.

Another type of cover that is very highly prized by historians and stamp collectors who have a special interest such as lighthouses, is what might be called a private cover. This is the type of cover you receive every day. It may be a personal letter or it may be a business letter. It will not have a special stamp, special cancel or cachet. The information on the cancel (date and location) and the person to whom the letter was addressed now become the important items. As an example, you have a letter (cover) addressed to Peter C. Bird, head Keeper, Eagle Harbor Light Station, Eagle Harbor, Michigan. The cancel shows the date August 1871. What makes this an interesting and potentially valuable cover is the fact that Mr. Bird was the first Keeper at the present light at Eagle Harbor. The date on the cancel helps confirm the fact that Mr. Bird was on duty at that time. An equally interesting cover would be one addressed to BM-3 Jerry McKinney dated April 1981. He was the last keeper at the Eagle Harbor station.

Perhaps now you can see why a cover can be a very interesting and potentially valuable item to collect. Here on one relatively small piece of paper you can have; an interesting stamp, a special cancel, often an attractive cachet, and a bit of history.

Since several references have been make to cancels and cachets it might be helpful to take a closer look at these two features. A cancel or cancellation by definition is a marking placed upon a postage stamp to render its further use impossible. You will note some part of the cancel always touches the stamp. Most present day U.S. cancels contain two distinct parts. The circular imprint, which includes the date and location, is commonly referred to as the postmark. The other part of the cancel comes in many shapes or forms. A series of wavy or straight lines is very common. If it is a first day cover, the words FIRST DAY OF ISSUE usually appear in this area. This is the part of the cancel and that normally touches the stamp. A type of cancel that is very popular with stamp collectors in general and lighthouse enthusiast in particular is the pictorial cancel. Anything can be pictured here. Usually the subject pictured in the cancel relates directly to the stamp, the cachet or the purpose for which the cover was prepared. Any individual may design a pictorial cancel, but it must be approved by the local postmaster before it can be used. The local post office applies the cancel. Usually this special cancel is good for only one in two days.

Foreign pictorial cancels differ from U.S. cancels in several significant ways. They are normally produced or designed by the Postal Service of that country and they are used over an extended period of time. Sometimes the same cancel will be used for several years. The only thing that changes is the date on the cancel. The countries of Japan, Germany and France have produced hundreds of lighthouse cancels.

By definition a cachet is a design or inscription printed, stamped or drawn on a cover relating to an event or anniversary occurring on the date of the cancellation or the subject of the stamp. Let’s be honest, the major purpose of the cachet is to dress up the cover. It is much like a fancy paint job on a car. Cachets serve no postal function and thus are not popular with all collectors. On the other hand, many cachets are works of art in their own right and are collected as just that. 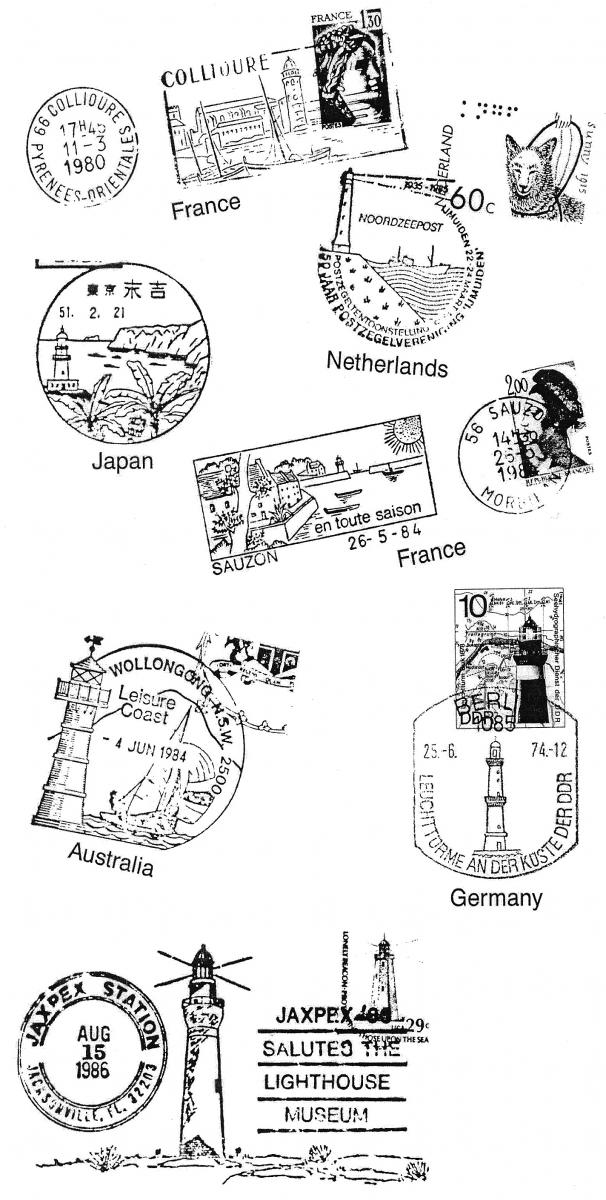 When you receive a letter (cover) take a good look at it before you open it and before you remove the stamp for your collection. Look at the stamp, the cancel, the cachet and to whom the letter is addressed. (If you happen to be president of the U.S., the cover is automatically valuable). It is usually not too difficult to decide whether a cover is of special interest to you. Generally if it appeals to you (because of its lighthouse feature) it will also appeal to other people. Open it carefully, trying not to damage the envelope. Under no conditions remove the stamp. A cover with the stamp removed is worthless.

Covers, cancels and cachets can be fun and interesting and a nice addition to your collection of lighthouse memorabilia.

The author, Phil Cole, was the founder and editor of the monthly newsletter PHAROS, the voice of the Lighthouse Study Unit of the American Topical Association. The newsletter features (strangely enough) information on historical and contemporary stamps of the world, which depict lighthouses. Short histories of lighthouses and book reviews are published in the newsletter. 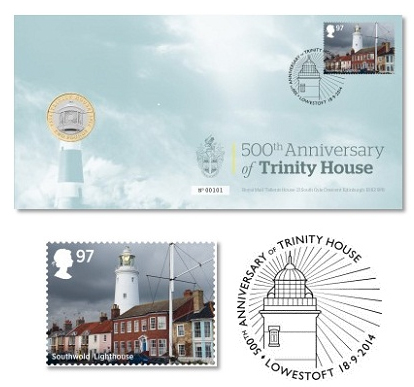