The Anatomy of a Lighthouse Story by Thomas Tag

The coincidents that occur as lighthouse history is reviewed continually amaze me.  This story is the result of several accidental findings that gradually came together over a period of years.  I will try to give you not only the story itself, but the series of events that allowed the creation of the story.   When we are finished we will truly have the anatomy of a lighthouse story.

Several years ago I wrote a story about a company named Chance Brothers, which was the major lighthouse lens manufacturer located in Smethwick, England.  In seeking background information to add to the details of my narrative, an Internet search revealed a small newspaper in England, The Black Country Bugle.  Surprisingly, within it were a few stories about Chance Brothers written by former workers at the company.  I wrote a letter to the editor stating that I was working on a story about Chance Brothers and would like to correspond with any persons with knowledge of the firm.

Over a period of several months, I received six replies!  One of the replies was from Jean Beach who wrote of her work at Chance Brothers during the early 1940s.  One item she fondly recalled was a one-armed gate keeper at the factory who had been very kind to her throughout the time she worked there.  Another response was from Margaret Evans, whose mother had been employed with Chance Brothers, and who sent a photograph of the gate keeper’s house at Chance Brothers.  While both bits of information were valuable, I used only the photo of the gate keeper’s house in my story.

Clues from a Far Different Source

Many years ago I was lucky to acquire a hand-written manuscript by a Mr. F. W. (Wally) Cooper who had been an Assistant Lighthouse Works Manager, and later, Chief Mechanical Engineer at Chance Brothers; where he worked from 1924 to 1944.  The manuscript is a detailed account of his time at Chance Brothers and the work he did there, and is very difficult to read because it is printed by hand in a tiny script.  I asked my wife if she would attempt to type the manuscript so that it could more easily be accessed.  It has taken nearly a year to type the 153 pages of the original document.

The manuscript contains many short, usually funny, stories about the trials and tribulations of a lighthouse engineer.  A few months ago I heard my wife sigh “Oh my” as she was typing, and asked what she had run across.  She gave me a short story from the manuscript that was sad, inspiring and funny.  The story was about Dennis Duff, a one-armed gate keeper at Chance Brothers, who had formerly been a lighthouse keeper in Ireland, and his son who had apprenticed at Chance Brothers, and then moved to Australia.  Now I became intrigued.  Just who was this one-armed man?

What Else Could I Find?

I decided to write to The Commissioners of Irish Lights in an effort to learn more about this keeper.  Within a few days I received a short history of Keeper Dennis Duff and his service at the Rathlin Island East Lighthouse in Ireland.   Also supplied was additional information written by a former keeper, Jim Dillon, about Keeper Duff and how he came to have only one arm.

Then I contacted a friend in Australia, Denise Shultz, to find out more about Dennis Duff’s son and where he worked.  The F. W. Cooper manuscript says that Phil Duff, Dennis’ son, was at the Woomera Range in Australia.  Was this a set of lighthouse range lights?

The Story of the One-armed Man

Dennis Duff, who was known by all as Denny, joined the Irish Lighthouse Service on November 2, 1908 at age 23.  He served first at the Baily Head Lighthouse, near Dublin, which was the training station for newly hired Irish lighthouse keepers.  Denny was appointed Assistant Keeper on March 1, 1910 and was posted to the Rathlin Island East Lighthouse, also known as Altacarry Head.  The Island lies to the far north east of Ireland in the North Channel between Ireland and Scotland.  Rathlin Island East consisted of two lighthouses.  The major lighthouse was located at the top of the cliff and signaled using an occulting light (50 seconds light and 10 seconds dark).   The second lighthouse consisted of only a lantern with a fixed light that was situated near the base of the main tower.  Both lights were built in 1856; the lower lantern light was discontinued in 1894.  There were two additional lighthouses built on the Island in later years. 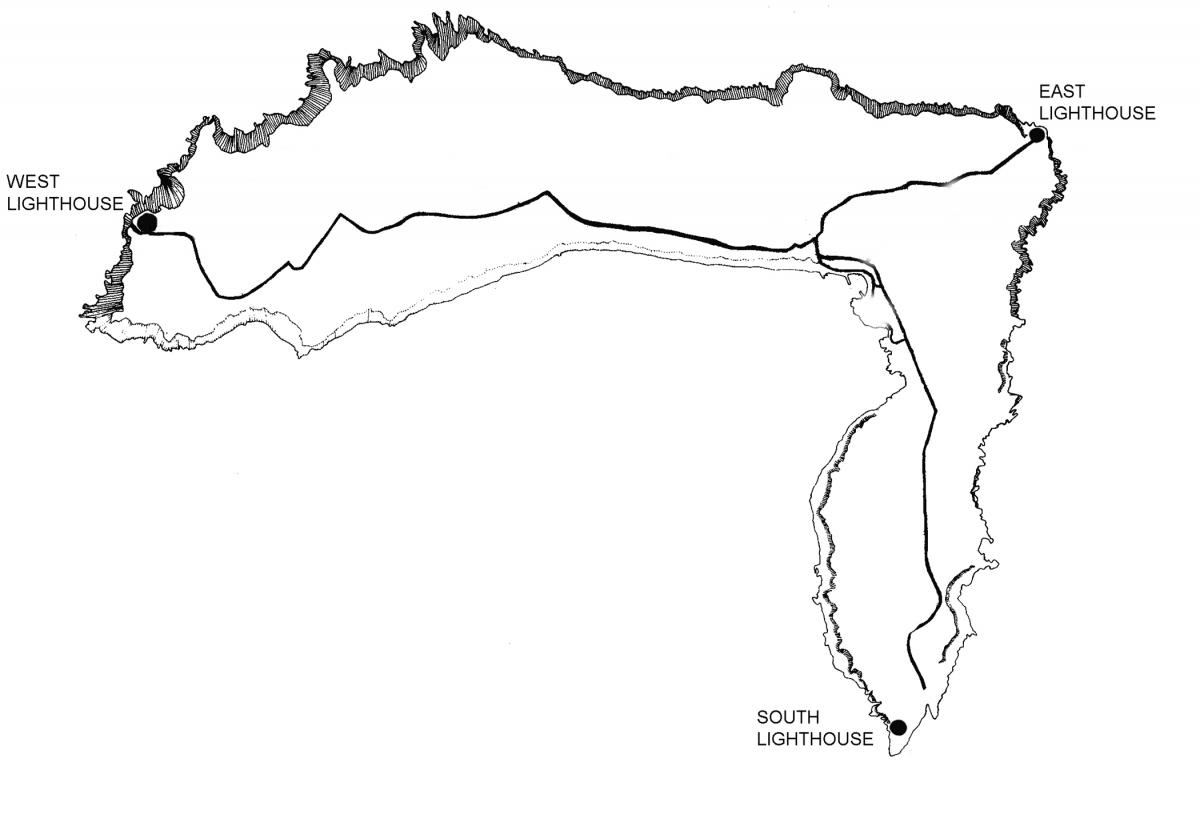 During the summer of 1912, Assistant Keeper Denny Duff and the two other men stationed at Rathlin Island East were notified that the steamer Princess Maud was to pass their station and steam around Rathlin Island, carrying a group of tourists from Belfast.  They quickly decided to fire a salute to the steamer using their 18-pounder fog gun. 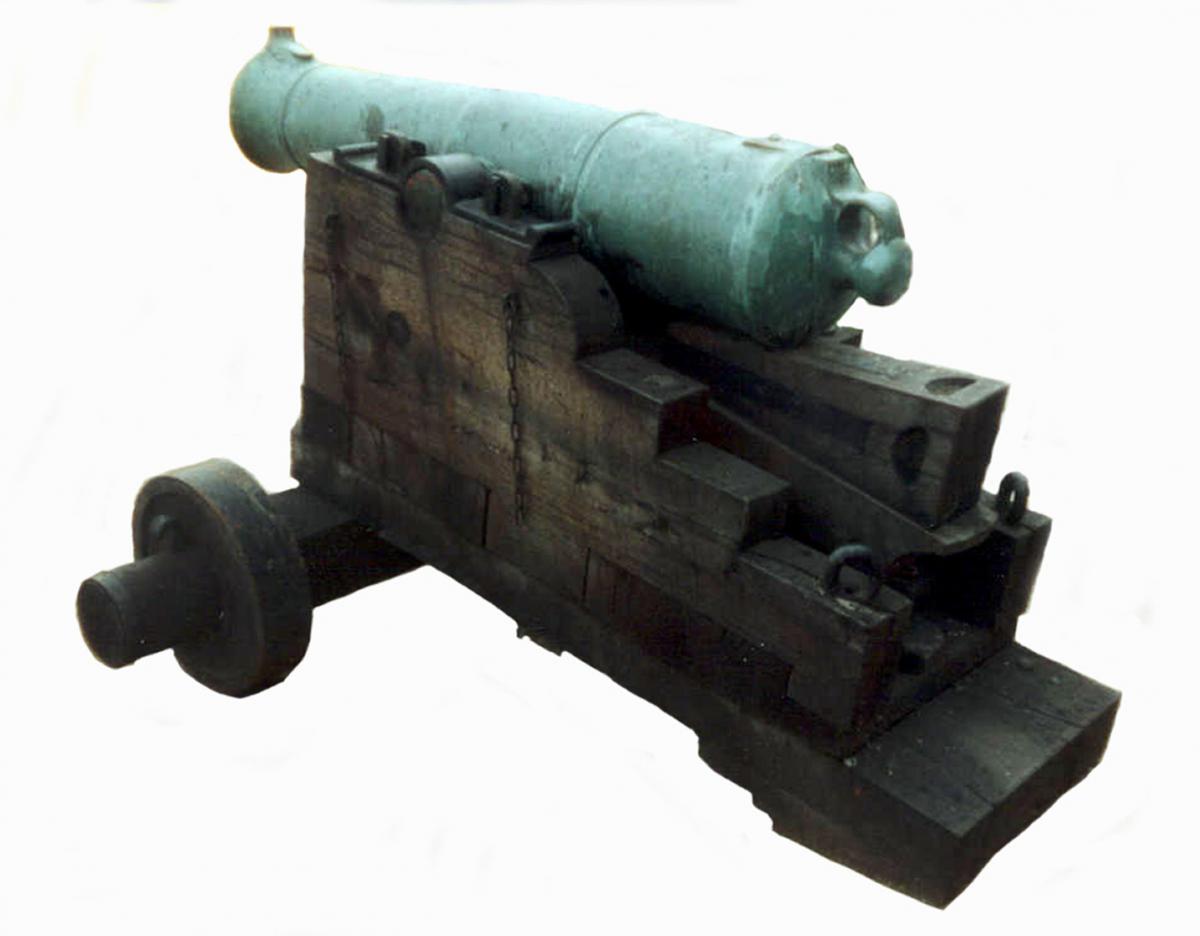 The fog gun had been installed at the station in 1866 and used a 3-pound charge of gunpowder. It was normally fired once every 15 minutes during fog to alert ships to the presence of Rathlin Island’s rocky coast.

Assistant Keeper Duff loaded the fog gun and a salute was fired for the Princess Maud.  The keepers decided that a three-blast salute would be the most appropriate and Denny hurried to reload the gun.  Unfortunately, he was in such a hurry that he failed to swab the barrel first, and as the second charge of gunpowder was pushed into the gun barrel, it contacted burning refuse from the first shot and ignited prematurely.  The resulting explosion blew the ramrod and charge into Denny Duff, gravely injuring his arm.  Duff’s arm was shattered and nearly severed and he was bleeding badly when the two other keepers reached him.  One keeper frantically tried to stop the bleeding while, by some great stroke of luck, the other keeper noticed a White Star Liner on the horizon approaching from the north on its way to Liverpool, England. 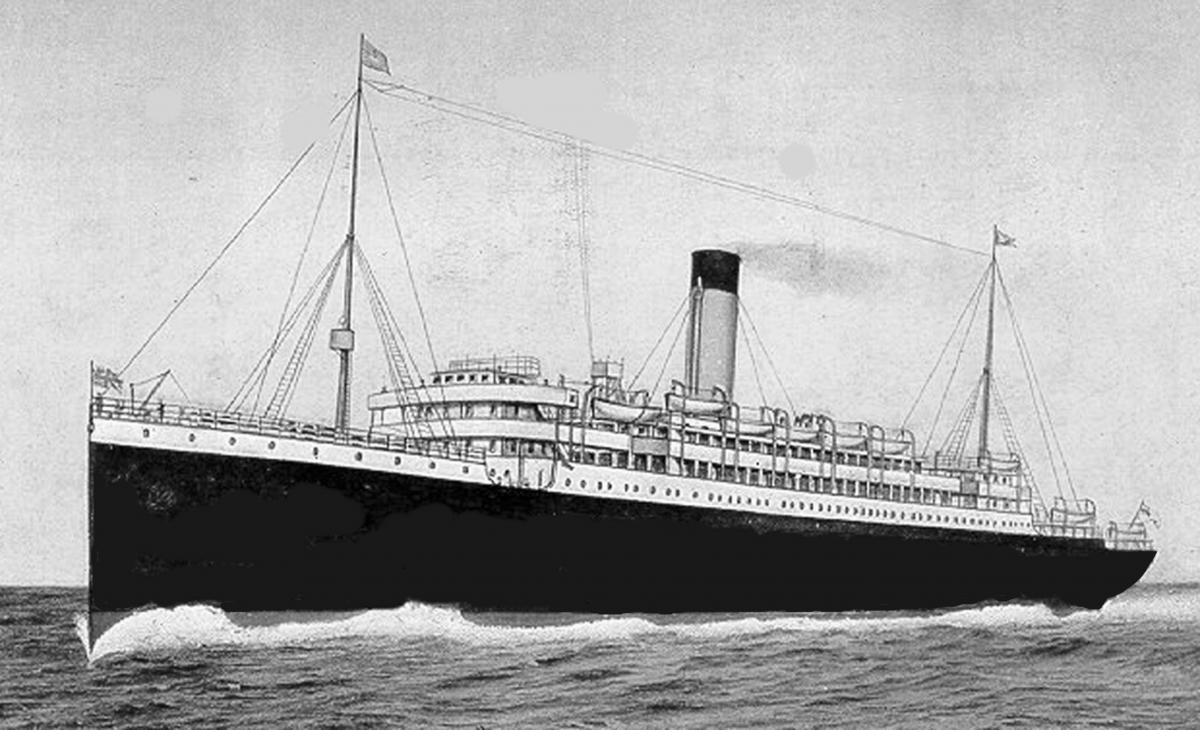 A typical White Star Liner of the 1912 era

The keeper immediately raised a distress signal and the liner changed direction toward the lighthouse.  The liner lowered a boat that proceeded toward shore as the two keepers carried Denny from the fog-gun platform along the supply path, past the now disused lower lighthouse lantern, and then all the way down onto the small landing spot for supplies at the base of the cliff.  The liner’s boat crew ferried Duff out to the waiting liner where medical assistance was rendered by the ship’s doctor.  Denny’s condition was grave due to the loss of blood, but his life was saved and when the liner reached Liverpool an ambulance was waiting to take him to the hospital.  Denny’s right arm was so severely damaged that it had to be amputated above the elbow.

Dennis Duff after the accident

The lighthouse-keeping career of Dennis Duff was over.  He recovered well and was released from the Liverpool hospital within a few weeks.  However, when he returned to Ireland he had to be terminated from the Irish Lighthouse Service on November 1, 1912.

Denny had family in County Wexford so he returned there where he soon found employment, at much lower pay, at the Harbor Commissioner’s Weigh Bridge.  However, this was not to be the end of Denny Duff’s work with lighthouses. Many years later, the Duff family immigrated to Smethwick, England.  Denny wrote to the Commissioners of Irish Lights and asked if they would recommend him for work at Chance Brothers, the lighthouse lens manufacturers located in Smethwick.

The Commissioners of Irish Lights obliged and phoned the Lighthouse Engineering Department at Chance Brothers, asking if Chance could possibly find some sort of work for an ex-keeper they could no longer employ.  The Chief of Irish Lights stated that Denny Duff had lost his arm in an accident, now had a number of children to support, and was living in the Smethwick area.  He also noted that the eldest boy, Phillip, was of an age to work as an apprentice and was also seeking a job.

Chance Brothers had always been a family-oriented company and was more than willing to see what it could do.  Wally Cooper was then one of the main engineers in the lighthouse works of Chance and it so happened that the Lighthouse Engineering Department was to receive a new entrance from an adjoining main road and would need a gate keeper.  Wally also needed an apprentice and brought Phillip into the Lighthouse Engineering Department.

Denny Duff worked at Chance Brothers for nearly twenty years before his retirement.  Denny Duff died in 1958.  He was fondly remembered by Wally Cooper and the workers.  Jean Beech stated: “There was a one-armed man who looked after the lighthouse gate who was also a very kind person.  I used to stop for a chat with him most days and was fascinated at the way he filled and lit his pipe.  He would wedge it under the stump of his arm to hold it in place.  How he never set fire to himself was a miracle.” 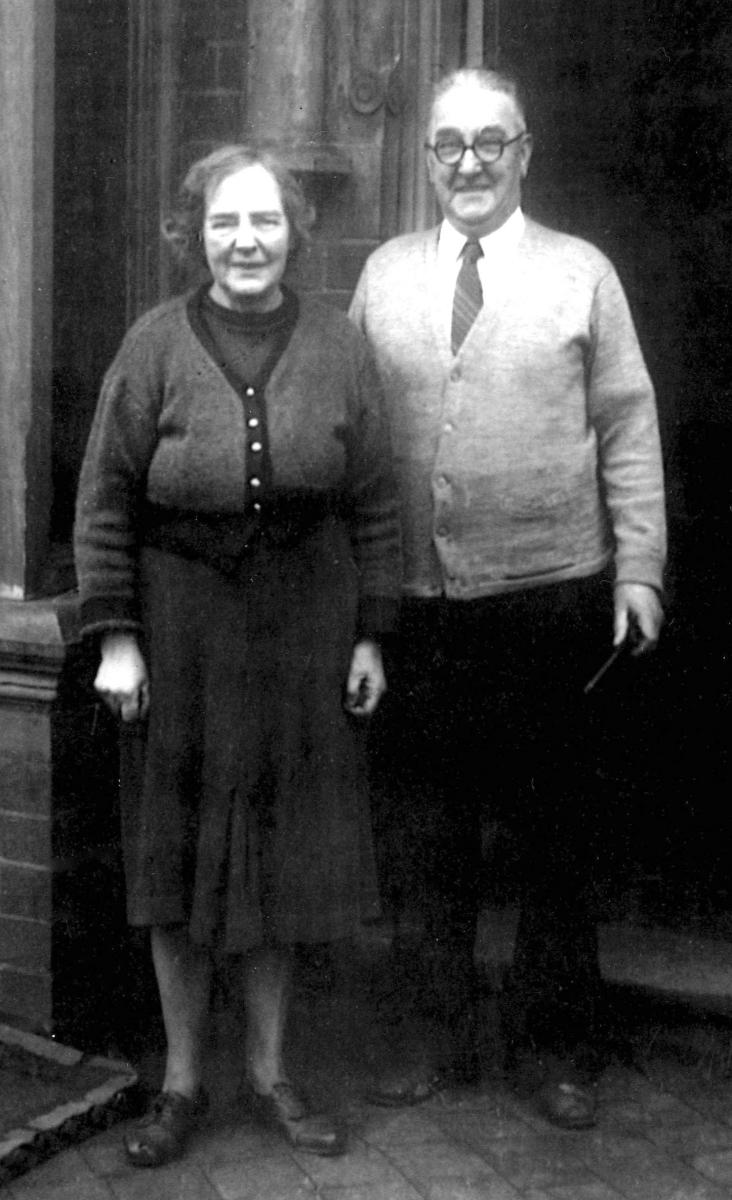 Dennis Duff and wife Helena with the famous pipe 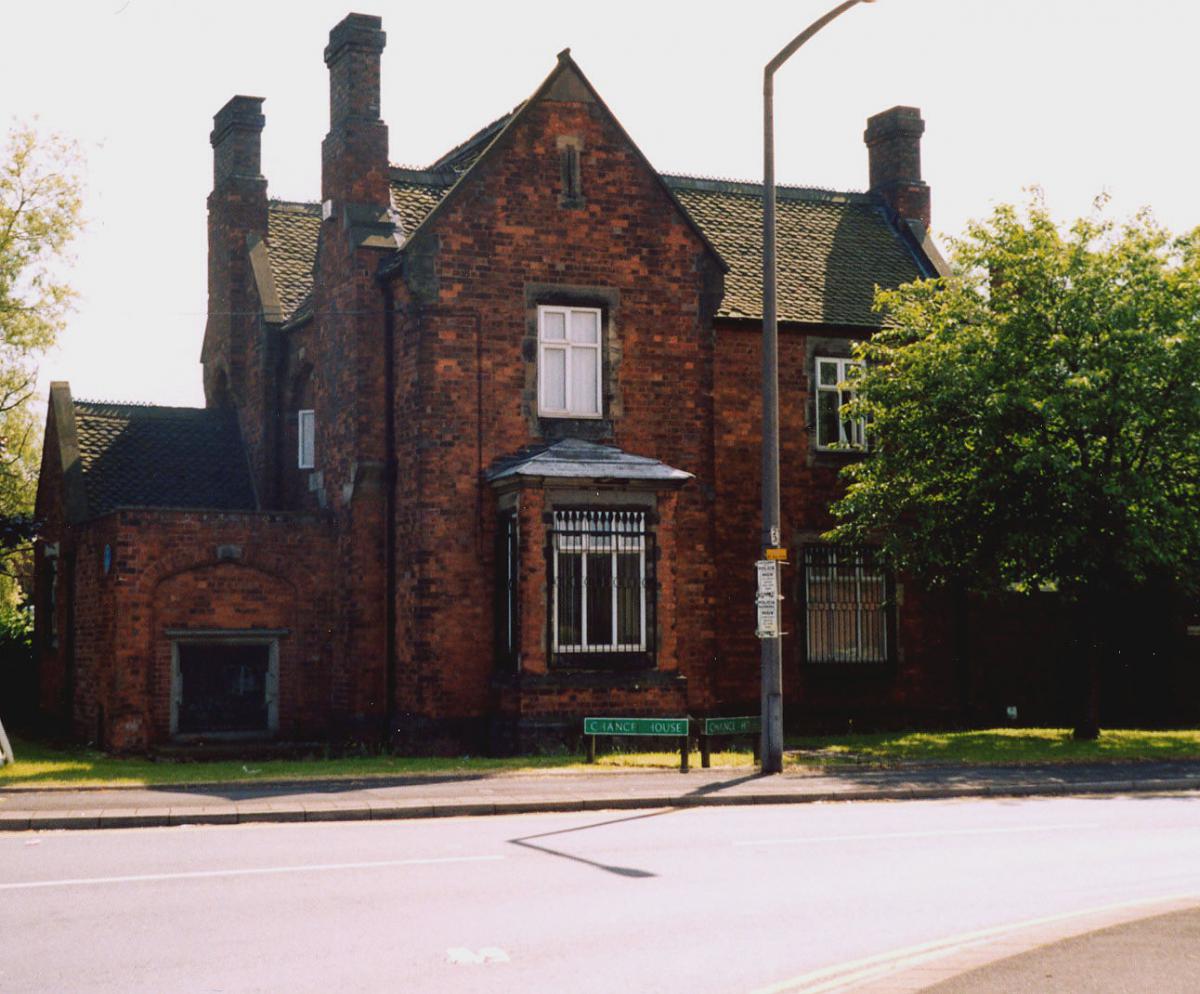 Gate House of the lighthouse works where Denny Duff worked

Wally Cooper continued to work at Chance Brothers until late 1944 when he left to pursue a teaching career at Chance Technical College and then at the Birmingham College of Technology.  In 1957, Wally Cooper became the Assistant Secretary at the Institution of Production Engineers and began lecturing all over the world.

The Story of Phillip Duff

Phil Duff came to have a high degree of engineering talent.  He worked as the apprentice to Wally Cooper for a number of years and attended Chance Technical College at night.  He eventually earned a degree in Mechanical Engineering.  Phil Duff left Chance Brothers in the late 1940s and immigrated to Australia with his family. 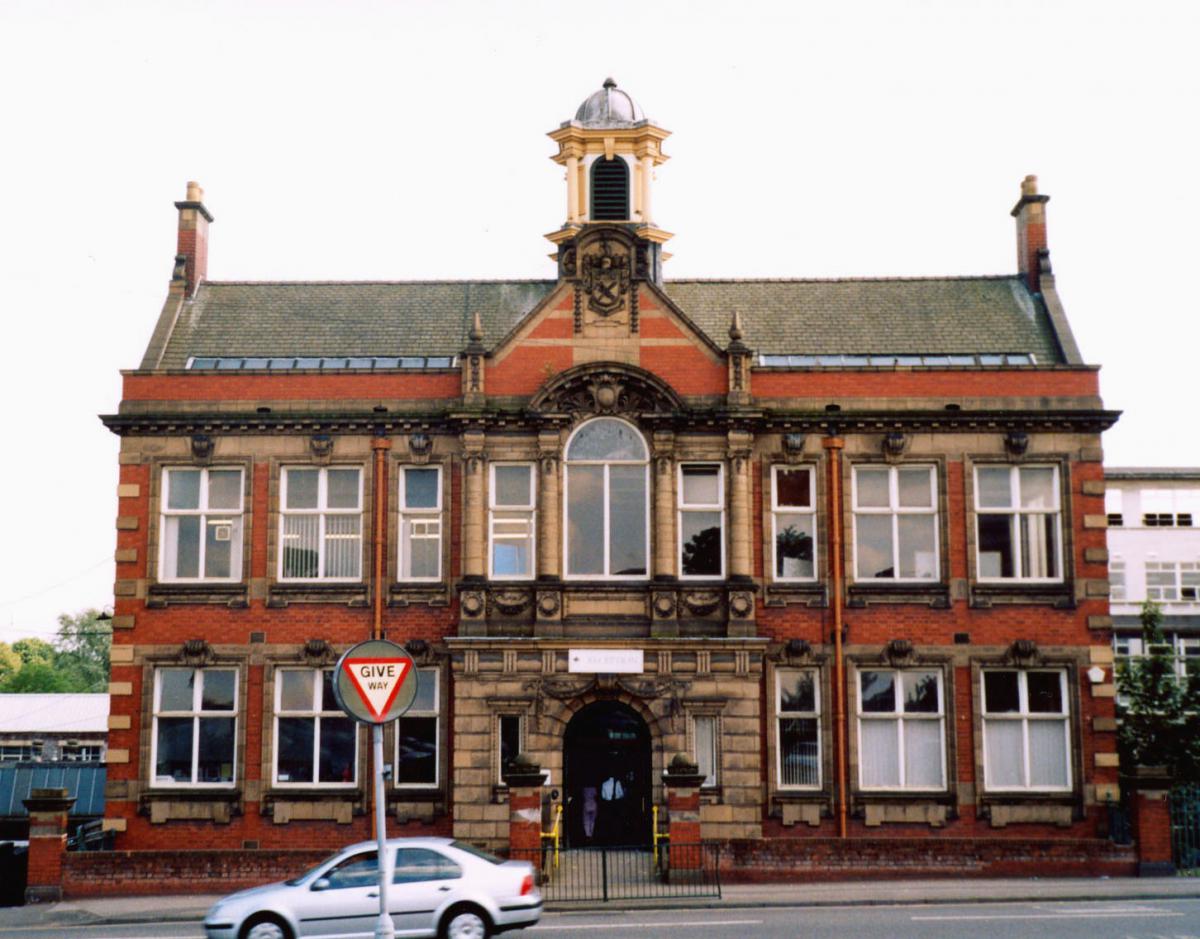 By coincidence, many years later in the 1960s, Wally Cooper was in Australia on a lecture tour where he was interviewed on the radio.  Wally recounts the following story in his manuscript:

Phone call.  An Irish voice - “I heard you being interviewed last night by local radio.”

Says he; “Yes - The eldest boy of the old keeper.”

“We met and celebrated over some few glasses of Aussie beer!”

It turns out that the Woomera Range has nothing to do with lighthouses.  It is a major Australian rocketry range that is also used by our NASA for space flight tracking.  So, now you have the anatomy of a lighthouse story -- and the story itself.

After this story was written, Eileen Grady and her family were researching their genealogy and contacted The Commissioners of Irish Lights.  It happens that I had sent a copy of the story to them as a courtesy, for all their help, and they passed my name and address along to Eileen.  She contacted me and I was then able to obtain photographs of the main character in the story. What a small world we live in!